Reichenau Gemüse harvested about 14,800 tons of vegetables in 2021

The Reichenau Gemüse Cooperative increased its sales by around five million euros to just under 32 million euros in 2021 compared to the previous year. Harvests were similar to those of previous years. According to the report, the cooperating farms produced around 14,800 tons of lettuce, tomatoes, peppers, and other vegetables on their fields and in the greenhouses on the Reichenau and in the Hegau (Constance district), some half of organically. Organic goods are more expensive to market, which explains the increased turnover despite production volumes remaining almost the same.

The cooperative now has a total turnover of 47 percent of produced organic goods; in 2020, the share was 38 percent. Reichenau market gardeners have adapted to the increased demand for organic products. At the beginning of the 2021 season, the new organic greenhouse facility in Singen-Beuren was put into operation on the mainland. 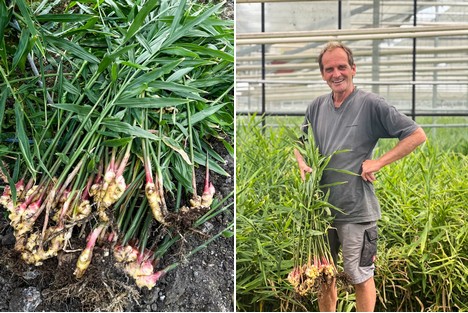 Fresh organic ginger from the island of Reichenau.

Start of the organic ginger harvest
More exotic vegetables are now also grown on Reichenau. A few days ago, for example, the organic ginger harvest began in the greenhouses, the company stated in a press release. In a labor-intensive process, the roots are pulled out of the ground. The tubers are cut off from the green part and freed from small root hairs. This is followed by careful washing, followed by packaging, and cooling of the goods. The ginger is then offered loose, both in food retail stores, but also at weekly markets in the region.