On Thursday, the 1st of September, for the first time last week, gas prices did not fall further after plummeting every day since Friday, August 26's extreme spike. The TTF gas price should hover around €220-240/MWh for the rest of 2022. In this crisis update, a look back at last week's energy situation. 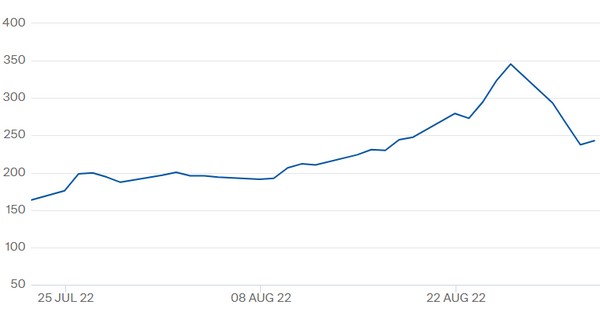 Despite the TTF gas price dropping sharply, it remains high. On Thursday, September 1, the gas price still closed above €100 per megawatt hour through the winter of 2024.

AgroEnergy's weekly update again included all the energy developments. Along with the sudden gas price drop, there was an even steeper drop in the price of electricity. The energy specialists point out that both these energy sources' prices fluctuate wildly during the day - there is very little trade taking place, so deals that do happen cause large price changes.

They point to the European Commission's price cap plan as the reason for the energy price decline. They also mentioned positive reports about the filling of gas storage facilities. In Europe, there are calls to decouple electricity and gas prices, among other things.

That would mean expensive gas-fired power plants would no longer be pricing electricity. There are, however, questions about the plans, as seen in recent (Dutch) news reports and this channel's crisis updates. These plans will probably become clear on September 9 when Europe's energy ministers meet.

It was to have become clear over the weekend whether gas would begin flowing the Nord Stream 1 after maintenance. AgroEnergy believes this and September 9 are two defining moments for energy prices. You can read the complete update here.

On Friday morning, the Dutch government gave a new update about the filling of gas storage facilities. See the entire September 2 update here. 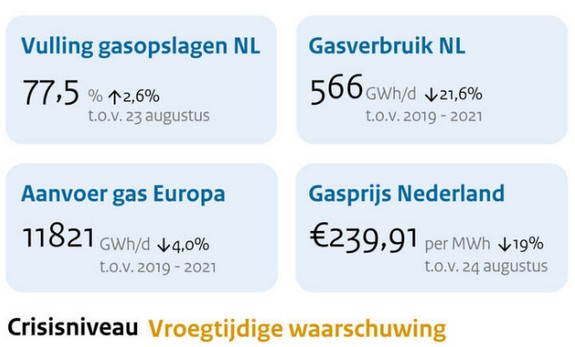 It seems the 80% fill rate required by Europe on November 1, 2022, will be and, in some cases, has already been met. Germany is even said to be working on filling the stocks for the winter of 2023-2024, reports the Dutch all-new radio station, BNR. That is based on reports from the German Ministry of Economic Affairs.

With the current sky-high gas and energy prices, the Boerenbond interest group is calling for prompt support measures for the Belgian agricultural and horticultural sector. Boerenbond expects prices to remain "astronomically high in the coming months". Horticultural companies with gas contracts that are up for renewal now have seen these prices climb tenfold. A €50,000 annual gas bill will now suddenly reach more than €600,000.

"That demands urgent measures. The government has already tried alleviating household energy bills, but measures to help the agricultural sector (and within it, greenhouse horticulture) weather this crisis are also sorely needed. These businesses must survive the short term to continue focusing on food production and sustainability in the long term," says Boerenbond President Lode Ceyssens.

This group wants to Belgian government to, among other things, issue tenders that compensate growers who voluntarily use less natural gas. That means a switch-off can be avoided as much as possible. Growers must know as soon as possible whether such a tender will be issued. That will be decisive in choosing to plant new crops in the coming weeks and months or not, says Boerenbond. You can read the complete article here.

The Dutch broadcaster, NOS, writes that the high energy prices are causing production to cease increasingly. For example, Norwegian fertilizer producer Yara Sluiskil does not rule out shutting down the third of its three ammonia plants too. Read more here.

Germany has stopped fuel discounts. Now, for the first time in years, cheaper to fill up in the Netherlands. See the NOS report here.