As the strawberry season entered its final phase, deliveries were reduced, and the accommodation was also reduced in various ways. The range was led by domestic batches. These had almost a monopoly in Hamburg, while in the other markets, Dutch, Belgian, or Polish produce could still be accessed. According to the BLE, the quality was not always convincing. A wide price range established itself. 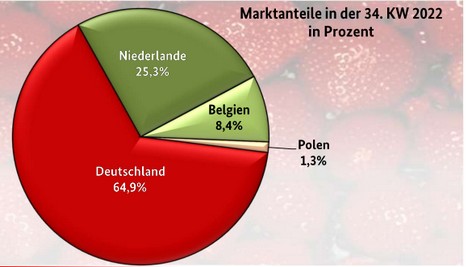 Exclusive fruits were scarce and expensive. Meanwhile, returns from retailers were made for discounts. In Berlin, for example, German and Dutch products cost between €0.50 and €3.50 per 500-gr tray. Overall, prices trended upwards rather than downwards, although very trading was slow across the board.

Apples
In the meantime, the alternative offerings had almost completely disappeared from the market. European fruit from the 2022 crop year dominated. The presence of Delbarestivale and Jonagold expanded strongly, and Elstar also gained in importance. Royal Gala and Golden Delicious were increasingly supplied from Italy.

Pears
Italian Santa Maria predominated. There was movement in the range: Turkish Santa Maria, local Clapps Liebling, and Williams Christ from Italy and Germany played a noticeably larger role. The first Dutch Conferences joined the already established Belgian ones but were not convincing in terms of taste in Frankfurt.

Table grapes
The range of products changed as the presence of Italian Italia, Crimson Seedless, Red Globe, and other varieties expanded considerably. All in all, a large number of varieties were available from Italy, including the new exclusive blue seedless variety Maula, which appeared in Frankfurt.

Apricots
The end of the season is already in sight, and deliveries were limited. The quality also left more and more to be desired. And ultimately, demand also dropped, as a certain saturation could not be denied. In terms of quality, the French and Turkish batches were the most convincing.

Peaches and nectarines
The campaign was slowly entering its home stretch. Spanish deliveries outweighed Italian ones. Deliveries from France, Greece, and Turkey had a rather complementary status. Demand was rather weak. However, a supply was tailored to the reduced accommodations, generally ensuring consistent ratings.

Lemons
South African fruits dominated ahead of Argentinean and Spanish ones. The high temperatures had a negative effect on sales on various occasions. Prices did not change significantly. In Berlin, South African products became slightly cheaper.

Bananas
Trading was quite uneven: rising prices were observed in Frankfurt and Hamburg, and falling prices in Cologne and Munich. Only in Berlin did the assortment remain unchanged in price.

Cauliflower
Domestic offers predominated. Only small quantities were available from Belgium, the Netherlands, and, more recently, Poland. Availability was easily sufficient to meet demand. This had been limited as a result of the high temperatures and the vacations.

Lettuce
Iceberg lettuce was dominated by domestic items, with Dutch items also appearing in Frankfurt, Cologne, and Berlin. Although deliveries had increased overall, they were not always sufficient to satisfy the demand. The accommodation possibilities had expanded. Belgian and German products were available for lettuce. Fluctuating prices were observed for imports in Frankfurt.

Cucumbers
In cucumbers, domestic shipments outweighed Dutch and Belgian. Supplies expanded. Nevertheless, it was not always sufficient to easily meet demand. Tightening prices were observed in many places prior to this.

Tomatoes
As before, Dutch and Belgian supplies formed the basis of the range. Polish, Italian, Spanish, and a few domestic items completed the action. Demand, while not exactly unkind, turned out to be too weak for the extended shipments. Domestic Intense showed up in Frankfurt.

Sweet peppers
Dutch goods were predominant. After prices had risen significantly in week 33, they dropped again in the 34th week. On the one hand, this was due to increased deliveries. On the other hand, cheaper Polish imports increasingly penetrated the markets. The quality of these imports was good, and customers were happy to buy them.