Various Dutch growers nowadays have a special mobile calculation container next to their greenhouse. Those who don't know any better will see a number of 'computers' suspended in a vat of oil. Actually, they are data servers in special oil. The container plays an important role in the gas-free heating of greenhouses. Rick Bakker and Jelmer ten Wolde introduce the Greenbox.

Increasing sustainability and making money
In 2017, the foundations were laid for the mobile calculator for which the design and application have been patented worldwide. Hardware and blockchain specialist Jelmer ten Wolde came up with the idea of using the heat released by data processing in greenhouse farming. "In the current energy market, the payback period is between two and three years. Often, sustainability and making money do not go hand in hand, but now they do," he says. Together with father Co, previously active in energy management in the sector, grower Dick Bakker and his son Rick, an innovation specialist in greenhouse horticulture, the idea took shape. Grower Dick's greenhouse proved suitable for a pilot project, and several other growers soon followed suit.

At Greentech Technologies, they say, convinced of their new energy solution: 'Forget that boiler, it uses a lot of natural gas.' Rick explains: "Many Dutch growers now have a boiler next to their cogeneration plant, their CHP. That boiler has to cover peaks in the growers' demand for heat, but it consumes a lot of gas. We are committed to replacing that boiler with a Greenbox." 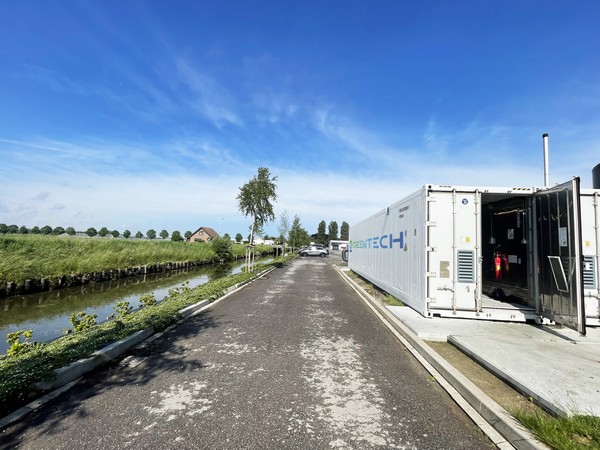 The Greenbox has enough capacity to generate 1.8-megawatt hours of residual heat. This is enough to heat approximately 5 hectares of greenhouses.

Growers can use the residual heat to heat their greenhouse or temporarily store it in heat buffers for when they need it. Electricity is needed to run the servers. Rick: "If there is a surplus of electricity in the grid, which is increasingly the case in Holland, it can be used relatively cheaply to run the Greenbox. At that point, the grower helps to balance the grid." And otherwise, the CHP provides electricity for the mobile calculation container. "By reducing the speed of the CHP to 70 percent, the grower saves on gas consumption. The residual heat from the Greenbox still provides the same amount of heat. In all cases, the heat profile remains the same for the grower."

It is possible to couple several containers. One of the early users of the technology has already made the connection. On the left in the photo is the heat storage tank, in front of it is the transformer station, and on the right are the two containers and the pipes running from them to the grower's heating room.

Fitting into the cultivation company
Jelmer calculates that using the Greenbox will enable growers to reduce their gas consumption by 30-35%. "And we saw an even larger reduction in CO2 emissions at one grower who replaced their boiler with the first version of our mobile calculator."

"The growers who are already using the technology all have different energy situations, Rick adds. "Depending on that situation, we look at how we can fit the Greenbox into the company."

One of the three Dutch growers who started using the mobile calculation container early on already had a low-temperature heat network in place. The residual heat from the container can run directly through it. At another grower, the residual heat first passes through the high-temperature network of the CHP. "After that, the grower can store this heat in their buffer," Rick says.

It helps if growers already have a CHP, which is the case for most in the Netherlands. The CHP supplies CO2 to the greenhouse and can function as a heat pump. "For many growers, the heat buffer is geared to the heat of 85 to 90 degrees Celsius. The heat we generate is 60 degrees Celsius. The CHP can help to upgrade that heat. That is not always necessary. I know situations where 60 degrees is enough for the grower in the morning and in the afternoon. With a three-way mixing valve, a grower can ensure that the heat either goes directly to the heat network in the greenhouse or via the CHP and then to the buffer." Growers without a CHP can also make use of the Greenbox with a few modifications. Rick: "Here, you can adapt the heat network for the use of low-temperature heat or increase the buffer. 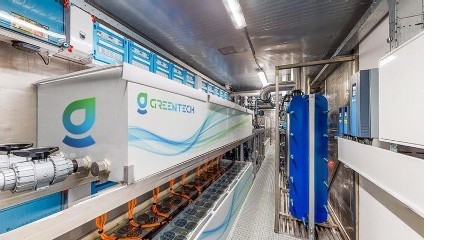 New innovations
There is also a great deal of interest outside horticulture, despite the fact that the company has operated with a low profile so far. Jelmer: "Our technology can be used in every heating process." Rick: "Together with the Swiss, we are also broadening the concept. For example, we see a lot of interest, some of it international, in our technology for use in district heating projects, but also in various branches of industry. We are an interesting partner for anyone who needs heat and wants to become more sustainable."

Now that serial production has started, Greentech Technologies expects to provide more growers with a Greenbox soon. They can become owners themselves. Jelmer: "With the current energy market, that is advantageous. We will, of course, take care of the maintenance and operation." Meanwhile, new innovations are already being worked on for introduction later this year. Rick: "We are working on an application that can capture and process electricity quickly. In this way, we enable growers with an (oversized) grid connection to generate additional returns by being active in the emergency power market. We are setting up Greentech Smart Balancing for this purpose. Already 25-megawatt hours have been ordered. By next spring, there should be 50-megawatt hours. Additional efforts are also being made on edge computing, the processing of data close to the source, for example, for image recognition. "A technique that is also emerging in greenhouse horticulture. That would bring us full circle" Rick looks a little (far) ahead.