Producers around the country work to combat crop diseases, spending time, money, and other valuable resources in their efforts. Fusarium head blight, one such bacterial disease, impacts a variety of plants. If left untreated, the disease affects the head of the plant, where it renders seeds unusable while also spreading the disease throughout the field and infecting the entire crop.

With the help of Nicholas Santantonio, an assistant professor in the School of Plant and Environmental Sciences, and Scott Lowman, director of the Institute of Advanced Learning and Research, Megan Pollok, a sophomore in the Virginia Tech College of Agriculture and Life Sciences, is researching the resistance of winter wheat to the disease to help save producers from its deadly effects. 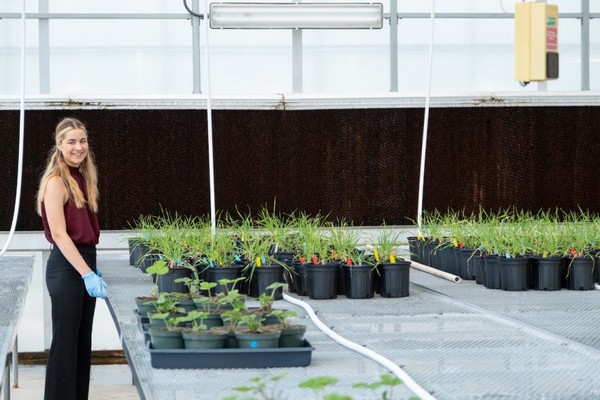 Megan Pollok is researching the resistance of winter wheat to the disease to help save producers from its deadly effects. Photo by Max Esterhuizen for Virginia Tech.

The damage of fusarium head blight can vary for a producer, mostly depending on how much the head of the plant is lost and the final grade of the wheat. A major outbreak could reduce the crop to being used as animal feed.

"I wanted to do a research project with small grains, specifically wheat, so I reached out to Dr. Santantonio and asked him about a collaboration with the institute," said Pollok, a Danville, Virginia, native. "We started working out the details that included eight different winter wheat varieties to see if I can inhibit the growth of fusarium head blight."

Aside from increased costs for producers, it's not always environmentally friendly to continue treating plants over long periods each year, so it can be beneficial to have biological controls that can take away the need to ever put anything on the plants themselves.

"It's inspiring to work with such a bright and talented young mind," Santantonio said. "Megan is developing and testing new innovative solutions to problems that we've been working on for a long time, such as with her project on the use of endophytes to provide protection against fusarium head blight. We need innovators like Megan to develop the solutions we would never think to try."

Even though there are varieties of wheat that have resistance, it's not always enough, especially in certain areas that are prone to fusarium head blight. Each of the eight varieties of winter wheat used has a different level of resistance to the disease that has been bred into the plant, ranging from low to high.

Using two groups, one controlled and another with one of two kinds of treatment, Pollok used bacterial endophytes, which are organisms such as bacteria or fungi that live within a plant, that were available at the Institute of Advanced Learning and Research in Danville, Virginia. The control group uses a solution that doesn't contain any bacteria. The partnership with the center is part of the Center for Advanced Innovation in Agriculture. 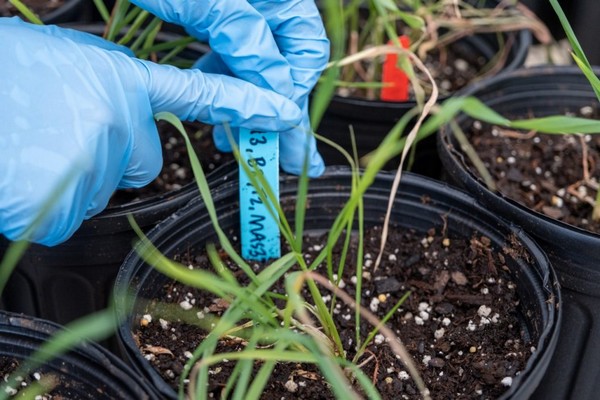 At the Institute for Advanced Learning and Research in Danville, Virginia, Pollok is testing eight varieties of winter wheat resistance to fusarium head blight. Photo by Max Esterhuizen for Virginia Tech.

"With the variety of endophytes available at the institute, I wanted to test and see which would be the most effective at preventing fusarium head blight," Pollok said.

Using different plates for the endophytes, Pollok placed four pieces of filter paper on each plate and placed the pathogen plug on top of each plate. After that, she inoculated each piece of filter paper to make sure that the bacteria could grow.

As the plate is incubated, the bacteria will prevent the growth of the pathogen – in this case, fusarium head blight – and these zones are evident when the plate is flipped over.

Pollok created two different mixtures, one of which was a fertilizer to help the plants grow or a Hoagland solution.

"Placing the bacteria on every individual plant is not feasible for a producer, so for the next part of my project is to look into vertical transmission of the bacteria and see if it is deemed fit to prevent fusarium," Pollok said. "My goal is to have the bacteria placed on the seed head of the plant and transferred to the seed itself, allowing producers to plant seeds that already contain the bacteria."

By conducting this research as an undergraduate at Virginia Tech, Pollok found that her true calling is to work with plants themselves.

"There's a lot of use in seeing what you can do without changing the genetics of the plant, and this has allowed me to figure out exactly the career path I want," Pollok said. "Creating my own experimental design and working on my project with minimal supervision allowed me to understand exactly what working on research is like and then use that as experience to get started in and further my career."