With the widespread impacts that natural disasters have had on the fruit and vegetable industry across Australia this year, causing significant financial and infrastructure damage, an Australian risk and safety consultancy firm is urging businesses to take the time to become more prepared.

The Nuffield Group business is a small consultancy that started around 20 years ago, and it specializes in safety, risk, and regulations. Over the past 3-4 years, it has been expanding and integrated a specialized emergency management team, and in recent months it has launched a new product, which makes it simpler for businesses to develop a risk register specific to their situations and share the common issues with similar businesses.

"So, it is about sharing those experiences in a format that everybody gets the benefit," Chief Executive Officer Nigel Dearing said. "We spend a lot of time responding to issues, but if we spent more time preparing for potential risks, we would not need to spend so long responding to them after (the event). We have spent a lot of time in the energy space and dealing with major hazard facilities, and they will spend tens of thousands of dollars on risk registers. We know that's just not viable for smaller enterprises to do that, so we developed a product called Risk Factor, and it's an online process to allow you quite easily to create your own business risk register in as simple a way as possible. We have recently run through it with a Victorian grower, and we start by asking around 30 yes/no questions, and you enter the risks you've identified and controls and mitigations that are personal to you." 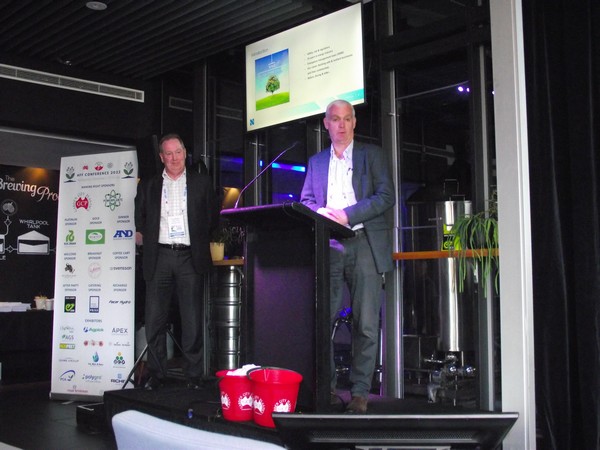 The company presented the concept as part of its presentation "Managing Risk for tomorrow" at the recent Hydroponic Farmers Federation Conference in Dandenong. Integrated Emergency Management & Recovery team (IEMR) Team Leader Tony Murphy explained that while creating a risk action plan might take time, it is an important investment or 'insurance policy' in ensuring the business is viable, sustainable, and continues to grow.

"Let's have meetings that are full of actions and people being accountable," he said. "So, A&A; actions and accountability. That becomes part of the culture, ensuring the businesses are ready and can be resilient against the shocks and stresses that we are seeing right around Australia almost on a constant basis. Once you do your risk assessments, you need to have plans in place and people accountable so that you can return back to business as usual. Natural disasters don't discriminate; they don't discriminate against boundaries or when they will happen, and they present us with new risks and challenges. For example, we know all about COVID-19. It is an ever-present danger."

He added that it is not just weather-related events. Australia has had a few years of drought, and then this year, there have been regionalized flooding that has hit crops and supply chains, creating shortages in the market and even impacting those not directly affected. But there have also been global events, such as COVID, causing things like labor shortages and the war between the Ukraine and Russia that has limited access to inputs such as fertilizers and chemicals. Then there are geo-political issues with China. Mr. Murphy says businesses need the adaptation and ability to pivot to work out a way to solve these problems.

"Does it mean, for example, that all our particular supply comes out of (or goes to) China when we know there are various issues happening there, or do we look to other sources such as Indonesia or even local," Mr. Murphy said. "These are the issues that need to be contemplated consistently, not something that can be put on paper and forgotten about. There are also issues with cyber security and the emergence of robots. But it's been a massive issue in terms of communities being hit, and one community has been wiped out four times in 18 months. People are saying there's only so much resilience a human being has, well, let's get to the front of the curve. Last year there were 34 significant natural events, and the thing I would point out is that it is far-reaching, and all sorts of businesses are being impacted, so make sure you have the thinking and preparation before the event comes. There's even a big push to refrain from terms such as 'once in a 100 years event' because that community that has had four in 18 months are saying this isn't supposed to happen - we are seeing erratic weather."

File: Some of the impacts of Queensland flooding north of Brisbane, source Qld Fire & Emergency twitter.

An unfortunate fact, according to Mr. Murphy, is that many businesses do not recover from a disaster as they are either underinsured or have no insurance - or no plan about the attributes needed to recover. He says businesses should consider looking at similar businesses and considering what mutual aid arrangements they can benefit from, to not think about them as competitors but from a survival perspective.

"Sometimes we need to be humble and realize we cannot do everything by ourselves," he said. "You need to understand the products, suppliers, and people critical to your business. You need to understand where the points of pain are and what you can actually do to reset and put your effort into those particular areas that will allow you to regenerate your business. You need to document your mitigation controls and contingencies, but make sure that they are being monitored. Having maintenance regimes for things like equipment is vital, so there's nothing that comes out of the blue that will be a surprise."

The Nuffield Group's online tool is free and simple to set up by logging in, but as Mr. Dearing notes, it is not a "set and forget" process. The company is setting up a monitoring process to be launched later in the year, which will require a fee, as the database of risks grows and updates.