Tomato is a crop that is widely cultivated around the world and also varies due to natural conditions, cultivation techniques, cultural customs, and other factors. How has China's tomato market changed? Mr. Peng Qiming, general manager of Hazera Qiming Seeds, shared with us.

"I joined Hazera in 1998 and left to serve Monsanto. In 2019, I worked with Hazera again and jointly established a joint venture in China, Hazera Qiming Seeds (Beijing) Co., Ltd. To better take root and achieve a more precise positioning for the domestic market, we established Hazera Qiming Seeds, making full use of the technology and resource advantages of Hazera's global platform, and strengthened domestic material selection and breeding to develop some major markets in China. "

"Tomato is one of our company's main businesses. Limited by factors such as cultivation facilities and product characteristics, the tomato was a common economic crop that was widely grown but lacked production scale in the early years, but now it has become one of the mainstream commercial horticultural crops. In 1996, Hazera's infinite-growing red-fruit tomato 144 was introduced into China. This variety has a long shelf life and is resistant to storage and transportation, making long-distance transportation of tomatoes possible, and has high disease resistance and high yield. For a time, this red fruit tomato became a high-end tomato and circulated rapidly in the market. The traditional Chinese market prefers pink fruit tomatoes, and there are many pink fruit resources in China. In 2008, the pink fruit tomato specially cultivated by Seminis for the Chinese market pushed the entire pink fruit market into a new situation. In 2011, Hazera's new pink fruit products also began to be launched on the market. Coupled with the efforts of domestic breeding companies, the entire tomato industry was in full bloom. In addition to resistance to transport, breeding for more resistance has been an ongoing topic and is constantly changing. From the earlier TMV, nematode, root rot, and now the ToBRFV, disease resistance breeding has always been the main direction of tomato breeding. "

"In recent years, with the improvement of people's living standards, the requirements for the taste of tomatoes have also continued to be higher, and the breeding of tomatoes for taste has also continued to increase. There have been many taste-oriented tomatoes, such as De Ruiter's Provence and Hazera's Summer sun, Qianxi, Busan 88, and other varieties that are consumed as fruits which also have a high premium price. Summer Sun is a very unique product of ours. Round yellow tomatoes, suitable for harvest loose, have been on the market for more than ten years. It's been very good." 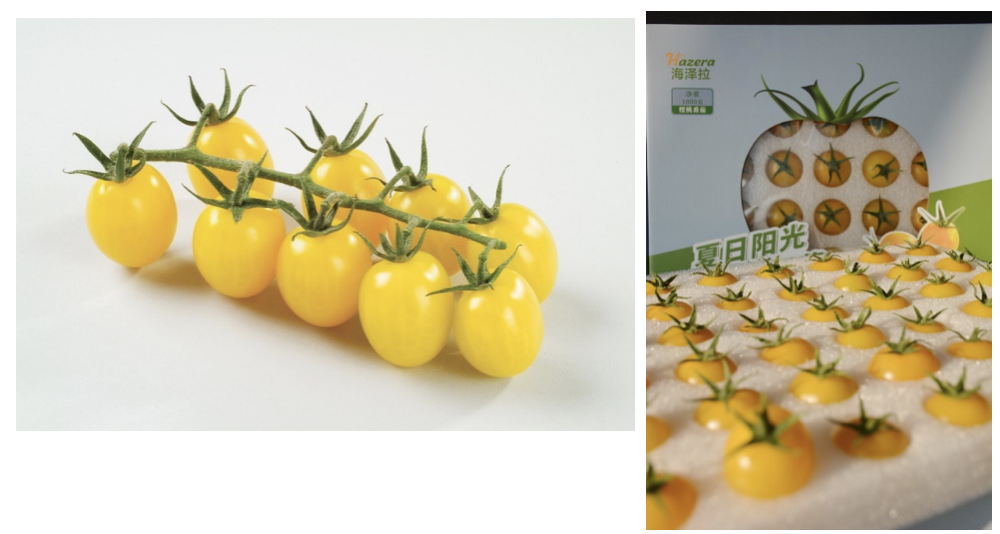 "As breeders, we must take into account the needs of growers, middlemen, and end consumers at the same time. Consumers' demand for "delicious" is certain. We must add judgment on taste when breeding now. Different conditions have different considerations for the characteristics of varieties. Large-scale horticultural glass greenhouses are a current trend, but open-field cultivation and arched plastic greenhouses still account for the majority of the market share. Glass greenhouses have better cultivation conditions and higher costs and are more inclined to keep tomatoes as high-quality fruits, so there will be higher requirements on the yield and appearance of tomatoes. At present, the varieties are basically imported from abroad. Moreover, high-end fruit operators all hope to find a single product, a popular product, and obtain exclusive authorization, so as to drive the development of the whole chain; the open field and plastic greenhouse cultivation put forward higher requirements for the resistance of the varieties.

At present, there are no pink fruits for glass greenhouses in China. One of our breeding goals is to produce pink fruit suitable for large glass greenhouses as quickly as possible, whether it is a loose- or vine-harvested big tomato fruit. The demand for pink fruit tomatoes in some Eastern European countries such as Poland, Turkey, and other countries has grown rapidly. At the same time, due to the influence of trade transactions, the market has gradually recognized the taste of pink fruit. In the future, the pink tomatoes of our Chinese joint venture can also be sold through global platforms.