Geoff Peach of Holyoak Orchard shut down his persimmon operation in June after nearly 40 years of growing. Originally from a pastoral farming background, Geoff, along with a group of enthusiastic young horticulturalists, answered the government's call to 'diversify' and entered the growing business in the early 1980s.

"When I came here, I didn't know what I was going to grow," Geoff says. "I looked for something not everyone else was into. With persimmons, it takes eight years to get the first crop and 13 years before you can get a return.

"There wasn't any knowledge around, to begin with, about growing persimmons, and we worked closely with the MAF and Crop & Food Research Ruakura." 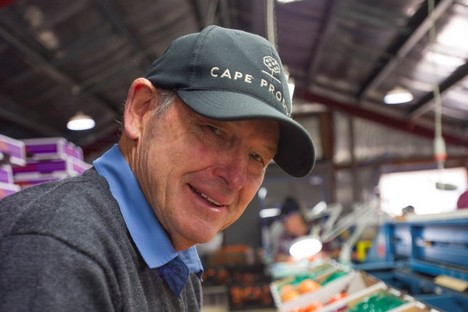 Geoff bought five hectares near Matangi, which, at its peak, had about 1600 trees producing more than 15,000 trays of persimmons for export in a good year.

Holyoak Orchard would usually complete ten rounds of picking to get the right color in the fruit, and 80 percent of the crop was sold before it came off the trees. Exporter, Cape Produce took everything, Geoff says.

The decision to sell
With airfreight costs rocketing from $1.20/kg to $5/kg, effectively cutting Geoff's income by one-third, the 74-year-old intends to sell the property and retire to Hamilton with his wife, Leigh. "It has been lucrative and enjoyable, and while Covid-19 has thrown a few curveballs, things will settle down again in the future."

Half the trees on the orchard will be removed, but the covered rear 0.6-ha section of the property will remain in case the new owner decides to continue production. While describing himself as a bit 'old school' with his own way of doing things, Geoff says he will remain available to anyone needing advice.

"The aim is if someone takes over, they can come to me for advice," he says. "They can take as much or as little as they like. Plenty of growers would like some help."

"He has a lifetime of skills and experience, including developing exports to the exacting Japanese market," Ian says. "Geoff was always someone I could call for practical advice, even in the middle of packing when he was extremely busy. I will miss the many discussions we have had over growing persimmons and the state of the industry."

Persimmons are not a crop from which quick returns can be expected, Ian says. However, with about 30 export growers, mostly in the warmer parts of the country, a steady growth in production is expected in the coming years.

Thomas and Becky Zhang immigrated to New Zealand in 2012, seeking a quiet life with less educational pressure on their children. Becky works as a translator for several government agencies in Auckland, including the Ministry of Business, Innovation and Employment, Ministry of Justice and Police, and Thomas has previous horticultural experience from a family vegetable growing operation in China.

The couple initially looked at purchasing a kiwifruit or avocado orchard. "We looked around Tauranga and the Bay of Plenty and couldn't find anything suitable," says Becky. "Gold kiwifruit were too expensive, and we couldn't afford to buy in. So, we looked further and found this property.

"Persimmons are very popular in China, although there they grow a different variety. The first time we tried New Zealand persimmons, we found them [Fuyu variety] very tasty. Persimmons are also seen as a sign of good luck and good fortune in China. In Asia, if people have a yard, they'll grow a persimmon tree. They [persimmons] are also hung on strings until they're dried like raisins, which can be used in a persimmon cake."

Keen to learn, persimmons are a new industry for the Zhangs. The original owners, Phil and Ellie Lanigan, had started the orchard in the mid-1980s. Even after selling the orchard and retiring, they have continued as mentors to the Zhangs.

The four-hectare property has two hectares with 1500 persimmon trees that produce approximately 60 tonnes of fruit a year. That fruit goes to market through T&G, MG Marketing, and FreshDirect – although Becky is perplexed as to why sweet and juicy persimmons aren't more popular with Kiwis.

Long Ridge produces early in the season and has been encouraged to market into the large Asian community in Auckland, Becky says.

"We hope to get more Kiwis to buy and become familiar with the fruit," she says. "I believe persimmons will have a larger market as more immigrants arrive."