It was summer vacation in 1994 when Frank Chávez visited his brother in Colima, Mexico. Over tequila and some beer, the conversation drifted to the challenges that Frank was facing as a plant grower in the floriculture industry to be able to reproduce a specific rose in time, the 'Flower Carpet'. To reproduce this flower, he used peat moss and perlite substrates without success, until his brother took him to visit a friend of his in the city of Tecomán, Colima, who had an alternative substrate: coconut fiber.

So, what began as a project to grow roses, became what today is Frank's greatest passion: helping produce food with coconut substrate.

Excited to discover this new substrate, he received his first container of coconut fiber 28 years ago at the port of Long Beach, coming from Tecomán. "I remember it perfectly, it was October 12, 1994. That order made us one of the pioneers of coconut fiber substrates in the United States," he says. 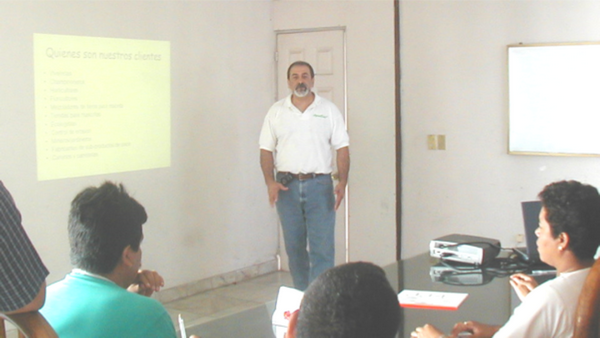 Frank training the first employees in his production plant

A new passion begins
This is how Frank started his brand, Agrococo, in the USA, at that time very few people were familiar with this new substrate, but Frank was convinced of the benefits of

the fiber. They evolved from using only dust to being the first to use the entire coconut tow to offer a much more complete product with the granulometries required by each type of crop according to its need for water retention.

"We transform something that was once waste into a very valuable product that, without fear of contradiction, will be one of the basic elements to feed the world due to the demand for more sustainable and efficient food production, something that hydroponics and coconut substrate offer," he adds.

The production of coconut fiber leaves a great satisfaction in Frank as it not only helps in sustainability but also provides jobs in the most marginalized communities in the area of Guerrero, Mexico, where, thanks to this work, hundreds of people get a dignified livelihood that allows them to improve the quality of life for themselves and their families.

"That mix of satisfaction is what keeps my passion for farming alive after almost 30 years. And I still have the best 20 years of my life left to continue to enjoy helping people through the substrate. The most valuable thing this industry has given me is the relationships with people because they enrich you and feed your spirit," he says. 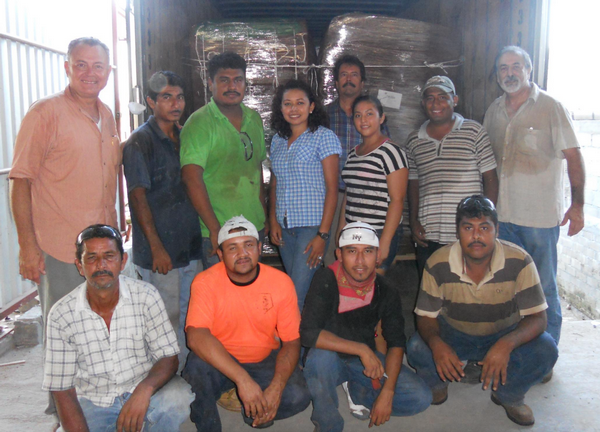 Frank and his first team at the production plant in Guerrero

The origin of a successful alliance
In 2011, Frank initiated the construction of a coconut fiber production plant in Guerrero, Mexico, while, alongside his partner, Jorge Peña Soberanis, they started their company Patromex, which could maximize productivity and quality of the final product.

Years went by and the consolidation of the plant in Guerrero was a fact, besides, he added 2 more production plants with other partners: thus, Patromex served hundreds of growers in Mexico and the United States.

While that was happening, more than a thousand kilometers away, Raúl Mercado, entrepreneur, and producer from Sinaloa, Mexico, restless to discover possibilities in substrates that could be more efficient, began to investigate the benefits of coconut fiber and who were the people with more experience, that's when he heard the name of Frank Chávez and decided to try his product to apply it to his crops. 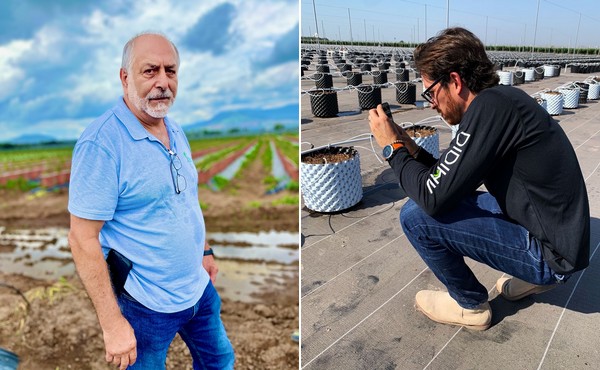 Raúl was fascinated with Patromex's coco fiber and decided to invite Frank to his field in Sinaloa. They walked around for a couple of hours during which Frank shared his views and advised them on the coconut substrate. "The fact that Frank took the time to travel to attend to us and give us a masterclass on coconut fiber, generated a great interest in me about the product. It ignited something inside me, I knew I wanted to learn more about Mexican coconut and that I was with the best in the field. The click with Frank was immediate.

Raúl was also starting, along with his partner, David Cadena, the hydroponics technology company, DIDIHU, so they later got closer to Frank and began to work very successfully with the Mexican coconut substrate.

The union is strengthened to do more with less
After several years of working as a team, Patromex and DIDIHU decide to go one step further. To strengthen their alliance they created a new partnership called: AGROHEROES, which will transform Mexican coconut fiber with technology into value-added substrates with the best quality for the world. 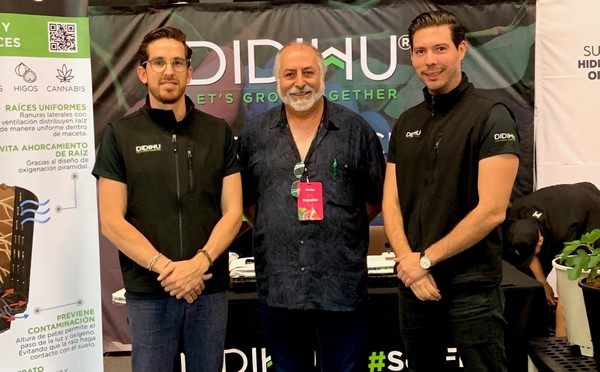 "Ever since I met Frank I have seen him as my mentor. The passion he brings to the product, his great experience, and above all, the fact that we share the same values have made it possible for us to understand each other perfectly, he is very transparent, professional, and generous. He has an impressive work ethic, he doesn't stop working all day and, although he is 70 years old, he has more energy than a 25-year-old", Raúl emphasizes.

The trust and respect that exists between the two parties is tangible: "Raúl and I have the same vision, the same ideals, he is a very honest and courageous person, we have a lot in common; but we not only complement each other as people but also with our respective companies: Patromex has a lot of experience in the productive part, while DIDIHU has a lot of strength in its commercial and marketing arm. We make a great team," says Frank.

He adds that for several years many other substrate companies have sought alliances to try to do business with Patromex, but there has never been that connection with them as with DIDIHU, with whom there has always been a mutual benefit, but above all, a shared vision. 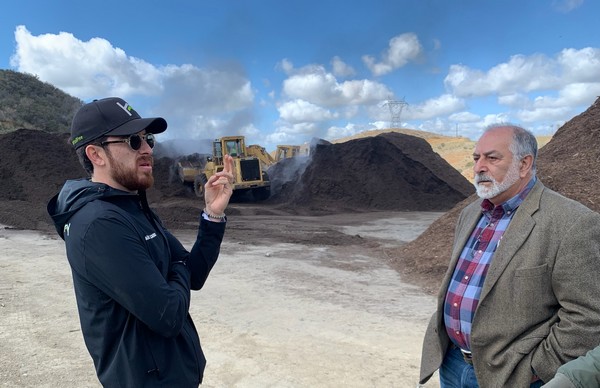 Raúl and Frank at the beginning of their partnership

Mexican coconut fiber
One of the partners' common goals is to help farmers understand the high quality of Mexican coconut fiber, which is why they have started a new plant strategically located in Irapuato, Mexico. The location makes it easier to serve customers.

Raúl comments: "Growers struggle a lot to secure their coco substrate due to planning, logistics, and supply chain issues. So we decided to go for this new plant to be closer to our grower friends to provide them with the best solution and service. It became our obligation to be close to them."

Frank says, "We are manufacturing value-added and sustainable products. This first plant is a big step that opens up many possibilities for us. In addition, we are already planning to open another one in 2023. 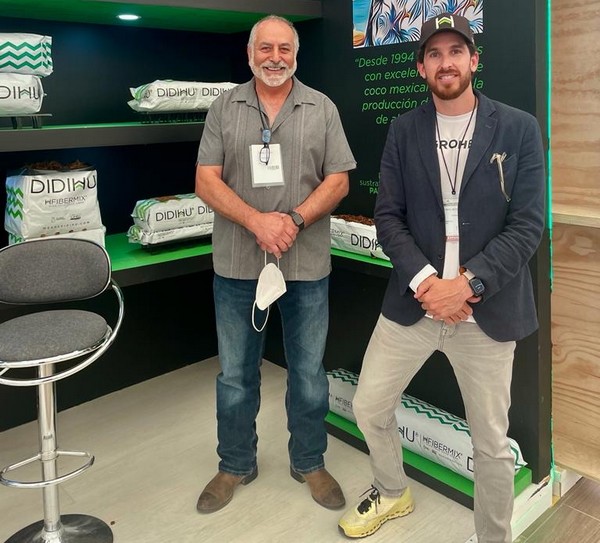 More than a partnership
For Frank, this new partnership is like a marriage: "There will be ups and downs, but certainly more ups because both parties are willing to have a 'marriage' that lasts forever. I am convinced that the successes will continue in this new phase.

Raúl's feeling is similar: "the mix is ideal, experience complemented with creativity and drive. I was very lucky because we all need a Yoda master and a Luke at some stage in life, it is very difficult to find one, but if you don't give up and work hard, with a little bit of luck, you will surely find both parts".

Meeting new producers, learning from them, and helping them to achieve success, as well as knowing that they are contributing a grain of sand to make the world more sustainable, is what motivates both Frank and Raúl to formalize this partnership and face the challenges together.