Top tips for growing lettuce in a greenhouse

Greenhouse lettuce is one of the easier hydroponic crops to grow. It has short crop cycles and low labor demands and can be grown year-round. Lettuce production in a hydroponic greenhouse system is factory-like in the way it allows for producing a high-quality crop on a consistent schedule.

The significantly higher production cost of a greenhouse and its operation, however, make efficiency paramount to success in a greenhouse enterprise. Greenhouse leafy green production differs from other crops in that the product sells by the head, not by weight. Standard lettuce harvest weights are 5 to 6 ounces per head, with an average 30-day crop cycle from transplant to harvest. With other vegetable crops, maximizing yield is a function of yield per area. In lettuce production, yield efficiency revolves around crop cycles per area. Tomato growers, for example, want to maximize yield per area in pounds per square foot (lb/ft2). Leafy green growers focus on moving as many units as possible through the greenhouse each year in the number of heads per square foot (heads/ft2). This way, fixed costs, such as electricity, marketing, management, and depreciation, are spread over more units. 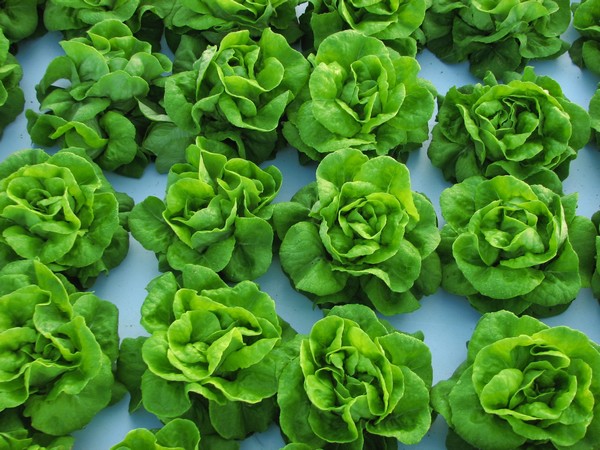 Seedling Production
Production space is expensive, and direct sowing of seeds in a lettuce production system is not an efficient use of space. Seedling production can take place on a fraction of the space used for final planting. Generally, this space should allow for 50 percent of the transplants needed for the grow-out area. A typical 11- by 22-inch nursery flat can easily hold 288 seedlings. In most systems, transplanting seedlings into the system can reduce production time by two weeks.

Pelletized seeds are easier to plant by hand or by mechanical seeders. Some smaller production systems use net pots with a well-drained potting media (figure 1); however, most commercial operations now use cubed media made from foam or stone-based mineral fiber insulation such as Rockwool (figure 2). Cubed media comes in perforated sheets that have predrilled sowing holes. The cubes quickly dislodge from the sheets, allowing for faster transplanting. Seeds can be grown in a lower nutrient concentration than that in the grow-out system; however, many small growers use the same concentration for seedlings and grow-out. Ebb and flow systems provide easily automated watering, but hand watering once or twice a day is also an effective way to water seedlings. Using a soft-flow water breaker on a water wand will reduce the impact of water on the seedlings. Seedlings grown in 1-inch cube media are ready to transplant when they have 2 to 3 true leaves and are approximately two weeks old (figure 3).

Grow-Out
Once planted, leafy greens are a low-maintenance crop. Production time for most leafy green crops is 30 days. Because most markets require weekly sales, the growing system can be divided into quarters for staggered planting. For example, a 30- by 96-foot greenhouse may have two 12 by 88 beds, with a total crop of 4,752 units. For staggered production, divide the production area into four quadrants, each producing 1,188 units a week. Standard spacing is 8-inch centers with 2.25 plants per square foot. Most heads of lettuce are harvested with about 1 inch of roots at 5.5 ounces.

The Greenhouse Environment
Lettuce can be grown in greenhouses year-round across Alabama; however, success highly depends on the greenhouse environment. Many growers in the northern United States struggle with energy costs associated with heating and supplemental lighting. While these are also causes of concern in Alabama, the primary concern is summer temperatures. In extreme heat, lettuce is prone to bolt, which occurs when the plant begins to go into a flowering stage. Lettuce that bolts becomes bitter and unmarketable. 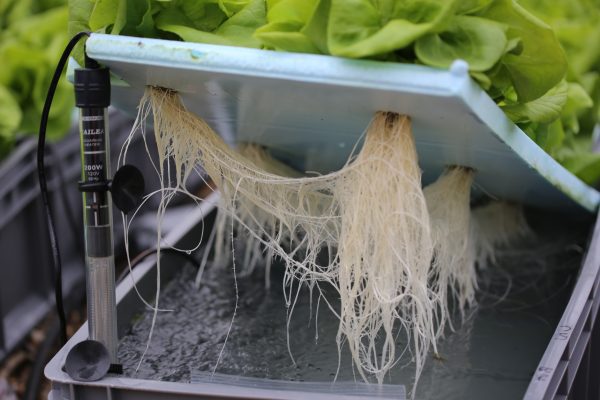 With a properly designed greenhouse, leafy greens can be successfully grown in the summer months in Alabama. Modern greenhouses have high ceilings to help buffer temperature changes, thereby increasing the volume-to-floor ratio. The gutter or eave of the structure should be 8 feet or higher; high-tech greenhouses have gutter heights of 16 feet or higher. Taller structures are more efficient at buffering temperature changes because there is more air to collect heat per area exposed to solar radiation.

Appropriately designed evaporative cooling systems can be used to lower greenhouse temperatures below outside temperatures; however, this is rarely achieved in Alabama. Many southern states require the use of a 50 percent shade cloth from April to October.

In winter, optimum heating setpoints are 75 degrees F during the day and 65 degrees F at night. While optimum for plant growth, these setpoints may not be optimum for energy costs. Nighttime air temperature can be maintained at 55 degrees or lower. Over time, growers learn the environmental limitations of certain crops and varieties associated with their specific greenhouse and market to maximize growth and energy usage.

Read the complete article at aces.edu