Jan Opschoor about the past, present, and future

"We think there should be fewer sales organizations in the Netherlands"

Fruit and vegetable cooperative Growers United is positioning itself as the source of healthy food. To achieve this, scale is important, said Managing Director Jan Opschoor to the visiting Agro Businessclub Westland on Wednesday, June 29. From his own clubhouse, the director spoke about the origins of the cooperative, the stormy growth the organization is experiencing, and how he sees the future. 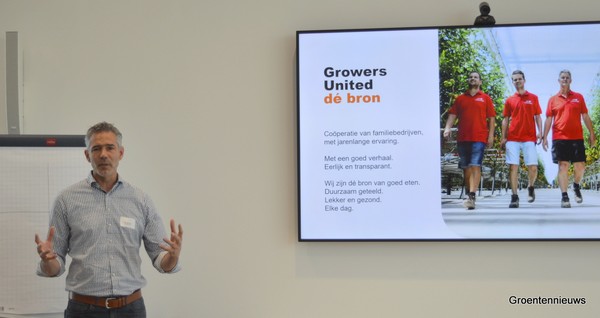 In his presentations, Jan had already reviewed the current playing field in terms of marketing organizations. After Harvest House and Oxin Growers, Growers United is the third party in fruit vegetables in the Netherlands.

Growers United currently has 635 hectares of tomatoes, (pointed) peppers, cucumbers, and aubergines. "In the future, we think there should be fewer sales organizations in the Netherlands. They need to be organizations with scale." Growers United wants to be one of those parties. "With our scale, we want to operate from strength and not power in the chain."

Collaboration
It didn't take long for the audience to start talking about Harvest House. Wouldn't Growers United be even stronger together with Harvest House? Jan started laughing. "We are already working together with Harvest House on non-competitive issues, that is. We look at where we can strengthen each other. In the market, we are competitors." Jan indicated that both parties work together in the area of lobbying - "we have joint talks with Adri Bom-Lemstra of Glastuinbouw Nederland" - and that they are working together on the issue of sustainable cultivation.

Area growth
Growers United - then called Coöperatie DOOR - was founded in 2013. Growers wanted more insight into their sales. They had already taken the same step in the area of packaging. Since the company was founded, the cultivated area has grown significantly. At the moment, Jan expects little growth in acreage due to new construction. "At the moment, expansion plans have almost disappeared. Only Schenkeveld and Meer Camp tomato growers have added more this year." Two other growers, VD Holland in peppers and Greenbrothers in aubergines, have come into production with a new greenhouse this year.

Cooperative with shares
Growers United has been a cooperative with shares since January 1, 2021. This means that the members are the real owners of a piece of the cooperative. In the so-called Future Proof program, the cooperative looks to the future together with its members. All members have submitted their vision of the future in 2030. This was followed by a number of sessions in which they discussed how to work towards 2030. Recently, meetings were organized about energy transition, which investments are necessary, which rules will be imposed on us by Europe, and how a bank views energy transition.

For young entrepreneurs, there is an 'Under 40' group. "They also meet in sessions to discuss themes. They also do fun things together like sailing and BBQing on the boat of chairman Jack Groenewegen."

Retail partner
Another important step in the development of Growers United is the move into trade marketing. The goal? Gaining knowledge about the chain and retail in order to subsequently sit down with the retail itself. "In the beginning, we had to tread on eggshells," Jan recalls. "We didn't want to bypass exporters and service providers."

These days, retail is 'no longer a black box' for Growers United, according to Jan. "We talk to them ourselves about trade marketing, quality, and sustainability. Sales and transport are handled by Dutch exporters and service providers. Jan showed a list of large supermarket chains. "All of them are familiar names to you, but I am certainly not saying that we carry our entire range everywhere. Sometimes, for example, we only supply our aubergines there under our Purple Pride brand."

European top 3 player
In 2018, Growers United applied for e recognition for GMO; European subsidy for Common Market Organisation. "This fitted very well; because we wanted to make a lot of collective investments. Since then, thanks to additional finances, we have been able to implement our strategic plan faster."

By 2030, Growers United's goal is to be a top 3 player in Europe. "There are 15 topics under that goal, of which international growth, our position in the Netherlands, and sustainability are three, for example. It would be going too far, however, to discuss them all here."

Year-round
In order to provide customers with year-round deliveries, Growers United invested in both lighting - currently LED lighting - and cultivation in Southern Europe and North Africa. In addition to the area in the Netherlands, the cooperative also sources produce from 200 hectares abroad. The question of how things will look for the lighted cultivation this winter was asked by the audience. 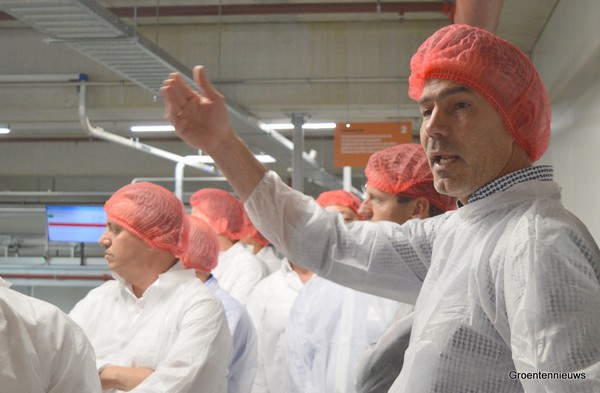 "Last winter, there was less lighted cultivation," Jan replied. Talks with customers are in full swing for next winter. "At this moment, the decisions are made about the cultivation for this winter. A lot depends on what the energy price is going to do and what retailers are willing to pay." In order to be able to grow more economically, investments were made in LED lighting.

Tough year
After his presentation and that of Financial Director Stefan van Vliet (more about this soon, in a separate article), Jan gave a tour of the distribution center. The brand new building has 36,000 square meters, spread over two floors. The year 2021 was a 'challenging' year, due in part to 'teething troubles' in the first year of the new technology, a major update of the new ERP system, and the establishment of a new organization.

Growers United has the ambition to continue growing in packaging capacity in the years to come. The next step was taken on Wednesday, 12 July. A new distribution center for block peppers is being built in North Holland. The first pile was driven on Wednesday. A building is still being rented.