Bees are the lifeblood of the food chain, responsible for pollinating one-third of Australia’s food, and protecting their existence has never been of greater importance.

“There are so many remarkable advancements in modern cropping such as plant breeding and genetics, real-time measurement and application of water. But commercial pollination is still just a hive placed in a field, and the growers cross their fingers, hoping the bees do a good job. It’s the same practice my father used, and his father before him,” explained David Lyall.

For commercial beekeepers and Co-Founders of Bee Innovative, David and Kate Lyall, this practice was well overdue for a shake-up. Their solution is BeeDar, a supercharged approach to pollination that allows growers to significantly increase yield, and yield quality, without additional irrigation, fertilizer, or land. “Effectively, what we’re doing, is helping the natural behavior of bees become more efficient and profitable,” said CEO and Co-Founder of Bee Innovative, David Lyall.

By measuring where bees are working in a crop, the BeeDar sensor identifies problem areas, informing decision-making that optimizes pollination outcomes. Attached to a drone, BeeDar works like a short-range radar, identifying whether a return signal belongs to a bee and even whether that bee is a European honey bee or a native stingless bee.

“It’s a bit like a radar at an airport that puts a signal out into the air, and the information bounces back, allowing the radar operator to distinguish between a passenger jet and a military jet,” explained David. What’s remarkable is that the objects the BeeDar distinguishes are 4 millimeters long instead of 70 meters.

“Whether it be two acres or 2,000, we fly over the crop and map the distribution of where bees are working. Or, more importantly, where they’re not. We often find significant sections that are under-pollinated or have such low levels of bee activity that it almost isn’t being pollinated at all. For the grower, that really impacts yield and profitability.” 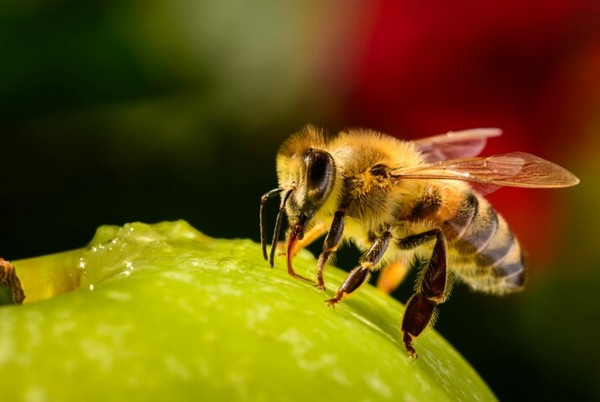 To accurately measure pollination activity, BeeDar flies three missions per day, early morning, midday, and afternoon, over a span of three days to account for the variables that can impact pollination outcomes. Weather is one, with bees hanging up their tools when it’s too cold, windy, or wet.

Proximity is another. “As a community, bees work to provide three resources to the hive: nectar, pollen, and water,” explained David. “If they can find everything they need within a short distance of the hive, they won’t travel further. They’re like us. If we want McDonald’s and there’s three on the highway, we’re not driving all the way to the third.”

Clever user interface translates complex data
It can be tempting with data-rich services to overengineer the user interface or, as David describes it, “dazzle everyone with bells and whistles.” “But we’ve done over 1,000 customer interviews in our four years of operation and learned that growers just really want to know three things: ‘Is there a problem? Where? And how do I fix it?’”

BeeDar’s approach is a simple color-coded heatmap. “Green means pollination is going well. Yellow means that the area is okay but could be improved. Red signifies a major problem,” explained David.

Because bees use local landmarks to navigate back to their hive, addressing trouble spots isn’t as simple as shifting hives midway through pollination. To act on BeeDar’s insights while working with the bees’ natural behavior, Bee Innovative supports growers on a multi-year contract basis.

“It’s a continuous quality improvement program. We’ll begin the first year by mapping what’s happening, then make recommendations to optimize pollination for the following year. We keep finetuning it over the next year or so, offering more insights and more improvements.” 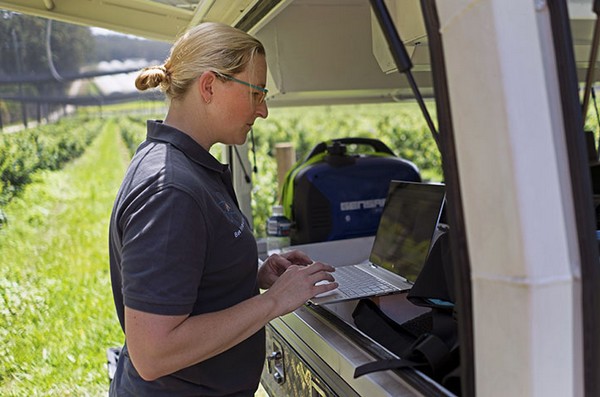 “For a tree crop, that two to three-year continuous quality improvement program delivers benefits over the life of the trees, which might be 20 years because some physical variables that influence bee behavior within that crop don’t change year on year.”

But Bee Innovative also supports growers seeking an immediate response, working with commercial beekeepers to map pollination activity as soon as bees arrive on the farm. If any trouble spots emerge, the beekeeper can place the last hives accordingly.

Growers are embracing BeeDar technology
While growers of tree and berry crops have been enthusiastic adopters, David also sees increased interest from the broadacre sector, particularly in seed production. And with nearly 100 pollination-responsive food and fiber crops worldwide, BeeDar’s potential is immense.

While the focus to date has been on the domestic market, with the help of Austrade, Bee Innovative is preparing to tackle the US market as well. But that’s just the beginning. “Whether it be Africa, Central-, South- or North America, or Europe; almost anywhere where people are growing crops that involve flowering, we’ve had a strong interest.” 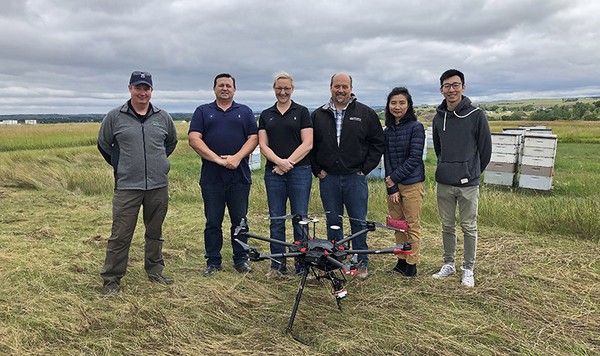 Just a few short – COVID-interrupted – years into operation, Bee Innovative has achieved remarkable commercial success. “But we haven’t done that in isolation,” explained David. “We can’t be specialists in every area, so we definitely benefit from partnering with others who can help us on our journey.”

“Like most startups, we had early successes and utter failures developing the tech. A partnership with one grower organization (in 2018) helped us move from the bench to a full-scale field trial. BeeDar had such a profound impact on that crop that year that we haven’t looked back.”

“I tip my hat to CSIRO’s ON program, which really helped us to fast-track the technology and understand how to be a successful startup,” said David. “And to the Australian Government, whose support helped us establish a tech partnership with the University of North Dakota, USA – specialists in autonomous technology. Drone tech is accelerating so rapidly, and this partnership allows us to focus on what we do really well, which is understand bees and leverage what others are already experts in.”

BeeID technology is set to play an essential role in Australian biosecurity
What started as a conversation over a cup of tea about future-proofing their beekeeping business for their children now has the potential to be a critical first line of defense against exotic bees and bee diseases. Bee Innovation’s other groundbreaking tech, BeeID, sounds like something out of a sci-fi movie.

And the recent detection of Varroa in the Port of Newcastle further demonstrates the importance of technology in the early detection, tracking, and the eradication of incursions, including Varroa’s natural host, Apis cerana, the Asian honey bee. BeeID utilizes advanced facial recognition technology at monitoring stations, which can be placed around Australian ports, BeeID assesses the shape of a bee’s face, the distance between the eyes, and other physical characteristics, to identify the good bees from the bad ones.

“In less than a second, we’ve demonstrated 97% accuracy in distinguishing between the European and Asian honey bees,” said David. Once a bee exits the monitoring station, there is potential for a BeeDar drone to follow it back to the hive, enabling biosecurity authorities to quickly eradicate it before it has the chance to mingle with our ‘wild’ bee population.

With more than half of pollinated agriculture in Australia performed by wild bees, the loss of our domestic bee population to varroa mite would be catastrophic for Australian food production. Not to mention commercial beekeeping. “BeeID really is our passion project,” said David.

“We work with different beekeepers in the US, and a 40 or 50% loss in hives every year due to Varroa is not an unusual number. Trying to work with Varroa proves we’re far better off without it.”

This article was first published on evokeag.com in July 2022.