Lauded for his merits to the horticulture sector

NL: Jan Willem de Vries appointed as Officer in the Order of Orange-Nassau

Jan Willem de Vries was appointed Officer in the Order of Orange-Nassau last Thursday, 23 June, for his great merit to the Greenhouse Horticulture sector. The distinction was presented to him by mayor Pieter van de Stad of the Lansingerland municipality during his farewell reception from Wageningen University & Research in Bleiswijk.

Jan Willem has made significant contributions to the so-called Golden Triangle in the last four decades. The Golden Triangle is the collaboration between research, administration, and the business sector. After a job in the business sector, he took a position in the former experimental center for floriculture in Aalsmeer in November 1982. This is one of the predecessors to the current Greenhouse Horticulture and Flower Bulbs business unit of Wageningen University & Research. In his position as head of the entire experimental business, he managed the facilities with excellence and deployed his team to the maximum of its ability to support research in frequently complex projects. 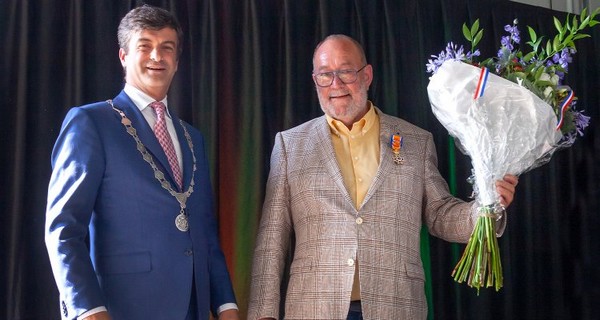 He also devoted himself to making the new location in Bleiswijk sustainable, for example, by working with entrepreneurs in the horticultural sector in the new polder in realizing the “Waterbedrijf Overbuurtsche Polder” and, following that, then project “AquaReUse,” aimed at joint purification of the region’s wastewater. His intensive participation in the network and his weekly columns made him a well-known ambassador of the sector and of Wageningen University & Research as a whole.

When the Product Board for Horticulture was disbanded, he expected a decline in the collective approach and launched the “ Club of 100” in 2014. This innovative collaboration focuses on businesses on the supply-side of the horticultural sector, including greenhouse constructors, screen and glass suppliers, suppliers of climate computers, biological pest control, substrates, planting material, trade, and distribution. Since 2014, the “ Club of 100” has grown into an active network of over 90 renowned parties that jointly invest in cooperative, pre-competitive projects that aim for sustainable production and, in doing so, secure the sector’s continuity,

Thanks to his tireless efforts and enthusiasm, the “ Club of 100” is now a well-known and successful network that is considered exemplary for a new form of collective collaboration in the business sector. In addition to his work within the business unity Greenhouse Horticulture & Flower Bulbs, De Vries held many ancillary jobs, both professional and as a volunteer.