DE: 'Dutch and Belgian tomatoes formed the basis of the offer'

Dutch and Belgian tomatoes formed the basis of the supply. The supplies were quite limited. Also, the presence of the domestic and Italian offers dropped off a little. According to the BLE, supplies from Poland, Spain, and France were mainly supplementary. Demand could generally be met without significant efforts. Prices tended upward in various cases due to purchases or improved sales possibilities. 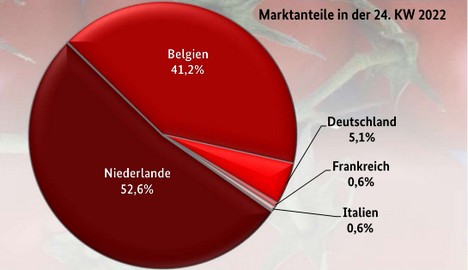 In Frankfurt, the price of Belgian beef tomatoes increased, while in Hamburg, this was more the case for round tomatoes and TOVs. In Cologne, meanwhile, the season of domestic TOV offerings also began: they took the lead in this segment in terms of price. Discounts were also recorded, but they were only on a small scale. In Berlin, Class II lots from Germany caused a delay in accommodating regular batches.

Pears
South African products dominated ahead of Chilean ones. Shipments from Argentina, the Netherlands, and Belgium were only of a selective supplementary character. Availability had obviously become limited. However, since accommodation had also decreased, prices often remained stable.

Strawberries
Local fruits obviously dominated the market. Dutch and Belgian items were also available on various occasions. Demand was not bad but could hardly keep up with the expanded supply, so concessions were necessary.

Apricots
Spanish deliveries predominated. In terms of quality, they were not all perfect, and neither were the Italian lots, with the result that prices were quite mixed. Demand was certainly all right but often lagged behind the supply.

Cherries
Spanish imports outweighed Turkish ones. Domestic and Greek items supplemented the range of goods, which had apparently grown significantly. Italian products also gained in importance. Stocks were inevitable, and even concessions did not protect traders from being left with stocks.

Peaches and nectarines
Spanish deliveries dominated the scene. In terms of importance, Italian Shipments followed. Feeds expanded and often overwhelmed the receiving hand. Demand was certainly friendly due to weather conditions but was mostly insufficient to allow complete clearance.

Lemons
Spanish Verna predominated, with Eureka from Argentina and South Africa rounding out the supply. The supply was sufficient to meet the constant demand. Marketing proceeded in a calm manner. Prices of imports from overseas often trended downward.

Bananas
Supply is generally harmonized with accommodation. Interest was not particularly strong in this regard. No significant changes were discernible in terms of valuations.

Lettuce
The majority of the range came from Germany. Belgian lettuce and endives were supplemented by Dutch iceberg lettuce. Business proceeded in an unexciting manner. The summer weather often accelerated the turnover. However, distributors were not always able to reap financial benefits.

Cucumbers
In the case of snake cucumbers, supply and demand were sufficiently balanced. Availability had become limited, as had accommodation. With trading quiet, prices often remained at their previous levels.

Sweet peppers
The range was primarily composed of Dutch, Belgian, and Turkish offloads. Although availability was limited, interest was satisfied without major efforts. Prices did not have a clear line.

Asparagus
The season was slowly entering its home stretch, which was noticeable on the one hand by reduced deliveries and on the other hand by weakened demand. The quality, however, was still quite convincing. The product range consisted mainly of domestic products.