Tsingsky Technology (Tsingsky) was established in February 2014 and is headquartered in Beijing Tsinghua Institute of Technology. It is a national enterprise invested in by Tsinghua University and many listed companies, committed to driving the transformation and upgrading of China's agricultural modernization by means of industrialization. According to founder Wang Xiaoqing, "Shuimu Jiutian focuses on comprehensive solutions for tomato and vegetable factories centered on thin-skinned, sand-fleshed tomato, and integrated life-cycle management from design, equipment, engineering to operation and maintenance. Moganshan has an over 4-hectare standardized base, and the Shuimu Mengdian Carbon Neutral Demonstration Plant, located in Mengzhuang Town, Huixian City, Henan Province, is the first agricultural carbon neutrality demonstration farm in China."

"Technological innovation always requires someone to take the first step. Since we are new-generation growers, we have personally participated in every link of greenhouse construction, planting management, variety selection, and market sales, exploring new agricultural production and development methods that are more suitable for China's climate and consumption habits. We are also constantly thinking about how to integrate the carbon strategy with the sustainable development of agriculture at a time when resources are increasingly scarce and environmental pollution aggravates so as to empower agriculture from the perspectives of capital, technology, talent, market, and system. It is hoped that digital methods can be used to realize the measurement and trading of crop carbon fixation, which will reduce the cost of agricultural carbon fixation measurement for growers in the future and allow growers to enjoy more benefits. "

"The first phase of the Shuimu Mengdian Carbon Neutralization Demonstration Plant Project covers an area of ​​over 3 hectares, and the second phase of the project is planned to be over 45 hectares. By combining the waste heat and carbon dioxide generated by the thermal power generation of Henan Mengdian Group with the Shuimu Vegetable Plant, using crop photosynthesis to fix carbon dioxide into organic matter, thereby achieving carbon neutrality in agriculture. The current power generation capacity is about 2 × 330 MW, and the annual carbon dioxide emissions can reach 2.4 million tons. One ton of coal can produce 2.6 tons of carbon dioxide. Because the quality of coal is relatively good, the content of flue gas and carbon dioxide emitted is just 1200ppm, which is very suitable for tomato cultivation. When tomatoes are grown, the saturation value of carbon dioxide is up to 1200ppm. The traditional implementation of CCUS requires a high investment cost per ton of carbon from carbon capture, transportation and utilization. For example, 100,000 tons of carbon capture a year requires an investment of nearly 1 billion. And we don't need to liquefy carbon dioxide, and the exhausted flue gas is directly input into the greenhouse, only needs to be dedusted and cooled, which greatly reduces the cost. The cost per ton has been reduced from more than 1,600 RMB to 3.5 RMB per ton. " 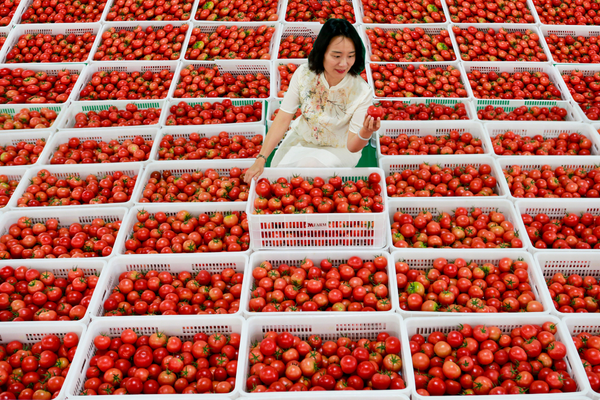 Next to it, through the development of the carbon fixation methodology of Shuimu Vegetable Factory, combined with sensor calculation, the carbon fixation data of crops can be automatically measured according to parameters such as light intensity, carbon dioxide concentration and planting density. The amount of water and fertilizer used, recyclable packaging, whether the transportation vehicle is green electric and the sales distance are calculated as agricultural carbon reduction data. The overall carbon fixation and emission reduction do not require third-party on-site verification, which makes carbon verification cheaper and makes agricultural carbon trading a new channel for supplementing the benefits of agricultural practitioners.

"Our greenhouse design takes into account the world's leading technology, and Tsinghua University's civil engineering, architecture, computers, and other majors are also involved. We noticed that the greenhouse in the Netherlands is between 5 and 28 degrees Celsius. Because the climate is suitable, the windows are mainly staggered-butterfly shape. The opening area is about 12%. The temperature in most parts of China is between -20 and 40 degrees Celsius. After measuring the domestic temperature and ventilation rate, we think that the one-piece window is more suitable. Next to this, the height of the greenhouse ridge is also continuously adjusted, from the initial 4m to the later 7.5m, so that the air capacity is larger and has better temperature adaptability. All processes take a long time to verify, basically a verification cycle is one year, so farming requires patience. "

"At present, Shuimu Jiutian Technology is setting up Shuimu Digital Agricultural Technology Group Company, and setting up a professional agricultural technology incubator and technology innovation center to provide a platform for more scientific research talents and entrepreneurial talents, and to set up industrial funds and market procurement to help the development of enterprises. Many outstanding scientific and technological achievements will be transformed into industrial technologies to promote the development of the entire facility horticulture industry, Mr. Wang concluded at the end."