Tools have always played an essential role in agriculture, but they have evolved dramatically over the years. I recently visited the Lyles Station Museum in southwestern Indiana, where I saw a fascinating variety of antique and prehistoric farming and processing tools (Figure 1). But farming in the future will require focusing on adaptation and mitigation opportunities in the face of the imperatives imposed by climate change. So today’s growers need new tools, such as the ones our research team is now developing, to help us prepare for the future by supporting the long-term planning of fruit and vegetable (F&V) production systems. 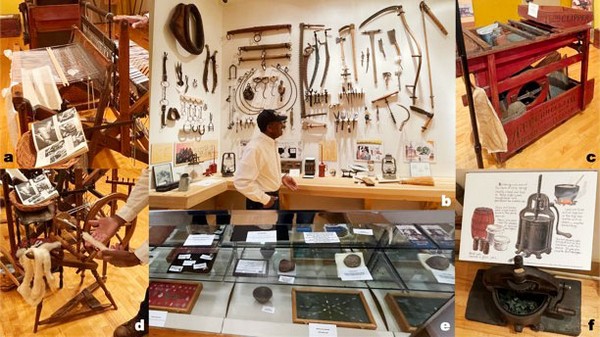 Drones monitor fields from above and may soon apply chemicals, while ground-based robots remove weeds and pests. Meanwhile, farmers themselves are increasingly reliant on a suite of online tools, accessible from smartphones, tablets, laptops, and even in the decked-out cabs of modern combines, which themselves seem destined to become 100% autonomous. These online tools provide agronomic, economic, and environmental advice on the vast array of decisions that must be made to keep modern farms humming along in a profitable and environmentally sustainable manner.

Looking at the future, managing climate change will become just as essential as controlling pests and diseases. Our first new tool in this domain was released in April 2022 (see screenshot in Figure 2). Using this tool, F&V growers and others interested in these production systems (such as food companies) are able to more accurately forecast future yields and determine where these crops might become more profitable and environmentally advantageous to produce, both in the near term (by the end of this decade) and also in the longer-term (by mid-century). 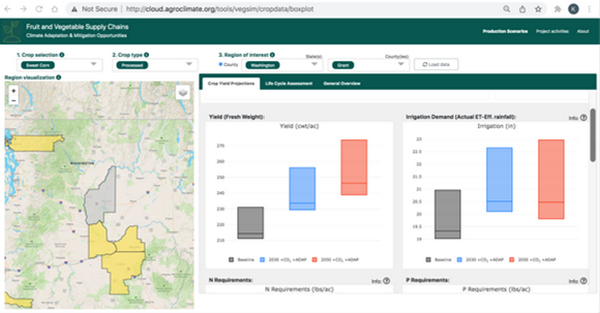 Figure 2. Screenshot of the University of Florida’s F&V Results Exploration Tool. It was developed by Dr. Clyde Fraisse and his grad student Mauricio Alex Zientarski Karrei. It helps explore multiple climate change impacts on fruit and vegetable crops across the conterminous U.S., including on yields, irrigation demands, and environmental footprints.

To use this tool, you first select a crop of interest from the seven available (carrots, green beans, potatoes, spinach, strawberries, sweet corn, and tomatoes) and then specify whether you wish to view fresh market or processing varieties. Based on these choices, the tool then allows you to choose a particular location of interest (for example, Grant County in Washington, shown in gray in Figure 2) from among those counties where the chosen crop variety can be produced.

Following these selections, the tool provides multiple options for viewing current and future crop yields, nutrient requirements (nitrogen, phosphorous, potassium), and irrigation needs. For the example presented in Figure 2, the tool shows that processing varieties of sweet corn are expected to see increasing yields through 2050, with irrigation requirements increasing through 2030 but then likely to remain stable over the next 20 years. You can also use this tool to explore current and future environmental footprints for these crops, as it will show how much land, water, and greenhouse gas emissions are needed to produce foods from these crops.

We explained the use of the Results Exploration Tool in a recently recorded webinar, where we also discussed our Climate Analogs Tool, slated for release this summer (see screenshot of the pre-release beta version in Figure 3). This tool is based on the concept of climate analogs, which was featured in a previous article of this series. As explained more fully there, the climate analog concept seeks to enable the exchange of actionable information among current F&V growers in two different regions identified by answering the following question: “Is there another F&V county whose current conditions resemble my future?” 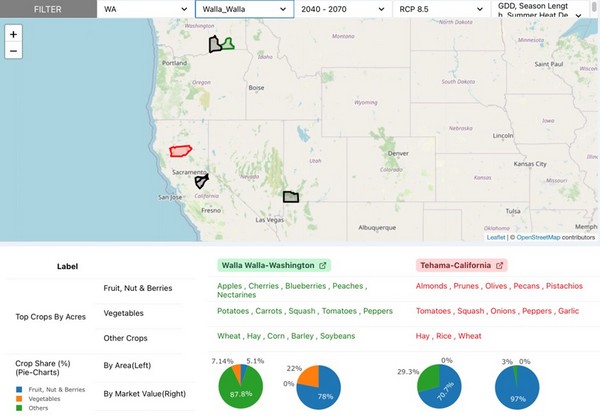 Figure 3. Screenshot of Washington State University’s Climate Analogs Tool (beta version). It is being developed by a team led by Dr. Kirti Rajagopalan, with support from post-doc Dr. Sid Chaudhary and research assistant Eshwar Nag Pilli. Each target county (in green) can have multiple potential analogs (in gray), with the best analog highlighted (in red).

Through a sophisticated analysis of a range of climatic variables (growing degree days, frost-free season length, days with heat stress, etc.), a target county is paired with other F&V-producing counties whose current conditions best resemble the future conditions of the target county. For the example shown in Figure 3, the best match for Walla Walla, Washington (our target county) is Tehama County in northern California (shown in red). Other potential analog counties not quite as closely matched as Tehama are shown in gray. The tool shows which crops are currently grown in all counties in order to help determine who it might be worth talking with to help with longer-term planning in the target county.

Through the use of this tool, Extension experts of paired counties can then meet to exchange insights, and our team has already assembled one such exchange between Extension personnel in the southeastern U.S. (Florida, Georgia, South Carolina) with those in Texas, whose conditions are similar to the southeast’s future. Several actionable insights came from the first of these facilitated conversations, including the realization that pest management would soon need to become a year-round activity.

Our team is planning to facilitate other such paired conversations in the coming weeks, but we believe that the ongoing availability of this tool after our project has come to its official close (at the end of June 2022) will mean that such conversations can happen naturally, as Extension personnel and others become exposed to these tools and explore future possibilities for their region.

These are all virtual tools, so it is hard to imagine them being on display at a museum several centuries from now. But they are no less essential for those engaged in humanity’s existential challenge of our time. We must produce our food in more sustainable ways, meeting our nutrition needs while respecting planetary boundaries, all while adapting to both gradual climate change and the onslaught of extreme events (including those related to both weather AND supply chain disruptions!) that are making it ever more challenging to affordably feed ourselves. And for that, we’ll need every tool in the toolbox.