Last Friday, Peter van Dijk celebrated his anniversary at CombiVliet with a nice party with colleagues, children, and grandchildren. He had, of course, already received the cake on 14 April...., as the tomato grower told with a wink.

Peter started in April 1997 as assistant manager at the MaasVliet location. In 1998, he became company manager, a role that suited him well. Consistently on schedule, strict but fair, and above all, a great guy to work with. But perhaps his greatest strength lies in building a good team. In all those years, he saw many people come and go, but he managed to create a good team of people every time. At his official anniversary a few weeks ago, he said that "the key to a good team is to let people deliver their strengths." And so he does. He also knows how to motivate schoolchildren and apprentices in such a way that they enjoy coming back to his Maasvliet location. He can be proud of that. 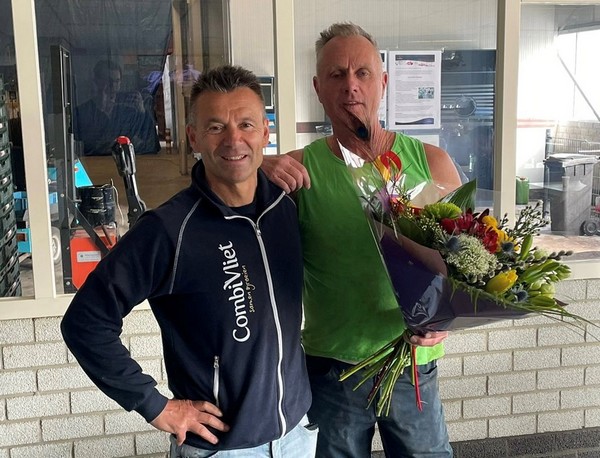 His team is not the only thing that changed at CombiVliet. What also changed was the size of the company. "Since I've been working at CombiVliet, the company's acreage has grown by five hectares every year," he says. Because of those changes, after 21 years of growing cherry tomatoes, snacking tomatoes, Santa's were also introduced in 2019. They were even on Groentennieuws because of this.

This year he made the decision to slow down and continue in another position at CombiVliet. Making such a choice for yourself shows strength. He is now busy training Koen Verbeek to be a manager so that he can hand over the baton once and for all.

CombiVliet has thanked Peter for his commitment, loyalty, and humor over the past 25 years. "We hope to work with you for many more years and in good health!"