"In the first quarter, Mexican berry exports exceeded those of tequila, beer and avocado"

As of week 19, Mexico's strawberry exports were nearing 50 million boxes. "Baja California is still exporting, but the export season from central Mexico is over with the shipment of about 35 million boxes. Normally, the harvest starts in November and lasts until May/June, but exports are always finished by the first two weeks of March, when California's production begins," says José Luis Bustamante, manager of Naturberry and president of the National Association of Berry Exporters, Aneberries.

"In commercial terms, the season in central Mexico has been very good and prices to growers have been better than in other years. The average FOB price should must have amounted to around $14 per box, which means that producers have obtained around $9-10 per box; a fair price that demonstrates the profitability of this product." 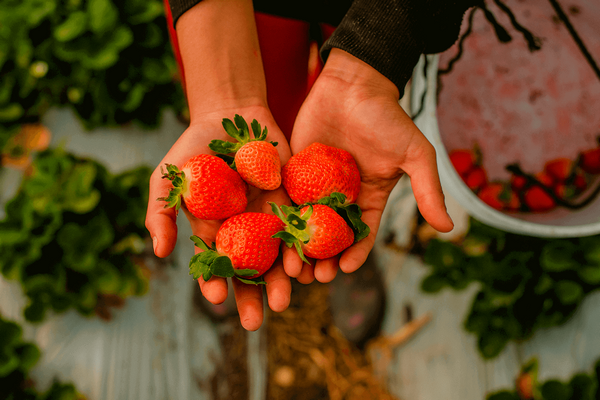 "Unfortunately, there were some phytosanitary problems at the beginning of the season that caused an overall reduction in the yields. Aneberries' estimate is that the volume of strawberries produced in central Mexico exported to the United States and Canada was 7% lower this season than in the previous one," says José Luis.

"At Naturberry we have marketed 3 million boxes of strawberries. The company was founded in 2012 and is a subsidiary of the North American company Naturipe Berry Growers, part of the Naturipe Farms group. Naturipe Berry Growers, of Japanese and North American origin, was founded in 1917 as an agricultural cooperative and over the years grew to become a marketer for its own members. Today, the list of grower-owners of the company includes several growers of Mexican origin who emigrated in the 1960's and 1970's and have continued to grow strawberries. In 2000, through a partnership with Hortifrut and Michigan Blueberry Growers, they founded Naturipe Farms to supply the market with the 4 berries all year round. 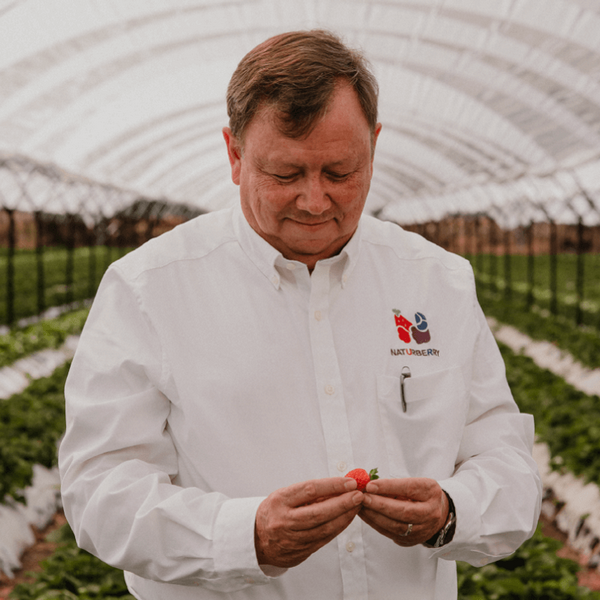 "Ten years ago, we launched the Naturberry project in Mexico. The goal was to have production in the winter months and be able to offer customers the same quality and consistency throughout the year."

"Since the 2012/13 campaign, we have gone from exporting 200,000 boxes, of 4 kilos each, to 3 million this season. And along with this growth, we have been focusing for three seasons now on protected agriculture," says José Luis Bustamante. "We have been working in a 6-hectare greenhouse with an NGS system, where we have managed to triple the strawberry production per hectare. While in conventional agriculture we manage to harvest about 4,000 boxes, with this system we reach 12,000 boxes."

"In Mexico, especially in the central parts of the country, soils are very clayey and one of the main problems in strawberry cultivation is precisely soil diseases. However, substrate cultivation technology is helping solve this and making it possible to grow crops without agrochemicals in a practically organic way. This is also allowing producers to become more efficient in the use of soil and water, and even in the use of labor. Greenhouse cultivation also has the advantage of extending the season, bringing the start to September, when the rains in Mexico are very heavy, and allowing it to last until March/April, when it is warmer in the central parts of the country. 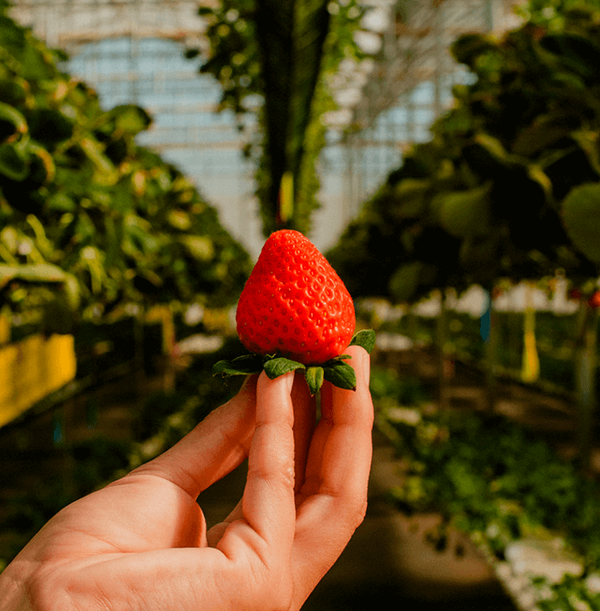 "For the strawberries grown in this project we have developed a special label: Greenhouse Grown, with which we distinguish them from other productions."

"Today, the difference between the cost and benefit of this type of system, compared to conventional systems, is still very high, but by increasing productivity with new varieties and thanks to specific developments, it is is going to shape the future of strawberry production," says José Luis.

"Fifty percent of the industry is controlled by Driscoll's with its own genetic program and its own varieties. The other 50% of the sector uses public varieties, although club varieties are also starting to be used. Among the most widely planted are varieties from the University of California, such as the Albion, San Andreas or Frontera, and from the University of Florida. As in the south of Spain, we plant a lot of Fortuna and Sensation, and the Sayulita, from the Planasa program, also stands out. 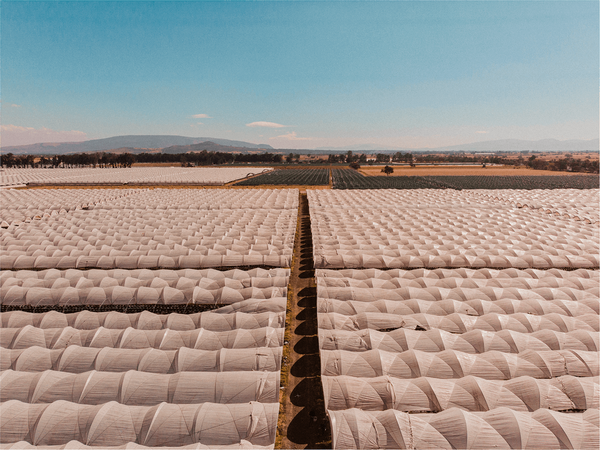 "However, the Achilles heel of greenhouse production is that there are no specific varieties for cultivation in Mexico. Rather, we resort to trial and error, and right now genetic development is working along those lines. We have recently been working with a very interesting program of club varieties from Plant Science, which I think is going to be very successful in Mexico," says the president of the Mexican exporters' association. "It is also noteworthy that in Mexico the use of root balls for growing strawberries is spreading, as opposed to traditional bare-root plants, given their health and earliness."

"A year and a half ago, Aneberries incorporated nurseries to be able to bring this industry into our organization. Today, several large nurseries, such as Planasa, Lassen Canyon or Plant Sciences, Fall Creek or Black Venture are our partners.

Frozen industry
Strawberries are undoubtedly the most widely consumed cultivated berry. Exports account for a considerable volume of the domestic production, although the domestic market also represents a very interesting share of the industry; however, there is another segment that has substantial weight in the sector: the frozen fruit segment.

"Approximately 40% of the production is exported or goes to the fresh domestic market and the other 60% goes to the freezing industries that exist in both Zamora and Irapuato," says José Luis Bustamante. "The IQF industry is a thriving industry whose consumption grew a lot during the pandemic." 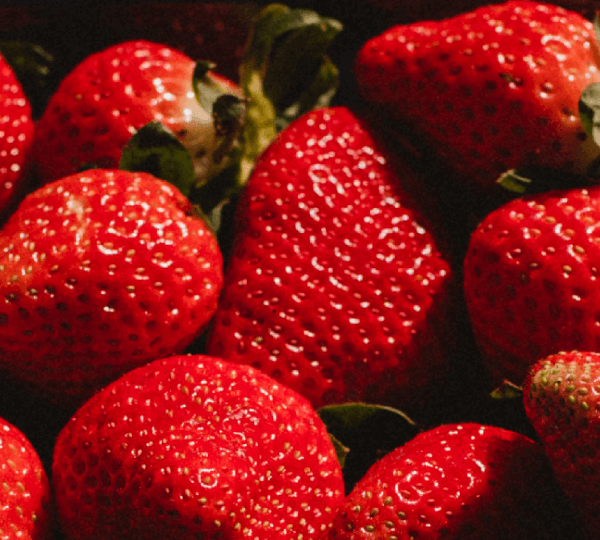 "We don't yet have final figures for this industry. At Aneberries we were already working with several processing companies and today we are including them as a special segment in our organization. And we have been surprised. At the association, we have always estimated that the export of berries generated around 2.4 billion dollars for Mexico, but when we also took frozen berry exports into account, we discovered that we reached 3.2 billion dollars."

"To give you an idea of the magnitude of the industry in Mexico, in the first quarter of this year, berry exports, including frozen berries, exceeded those of tequila, beer and avocado."