Ruud den Boer landed a dream job in October when he joined Oxin Growers as Greenhouse Vegetables Commercial Manager. Since times are turbulent in the greenhouse vegetable market, he was able to start immediately. Fortunately, Ruud is not unfamiliar with the sector. 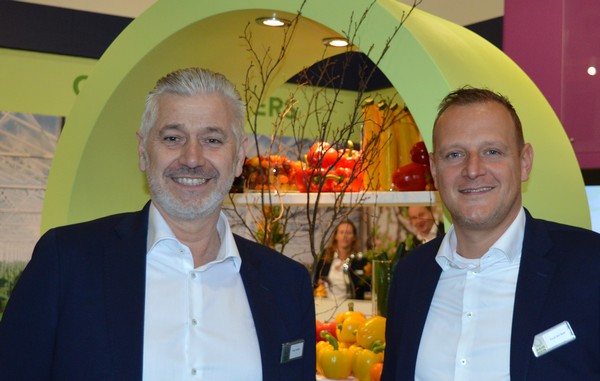 He used to work in the packaging industry and, for the last decade, held various positions in the fruit and vegetable packaging sector. "I used to sell those products to growers; now I work for them," he begins. Ruud joined the Dutch grower cooperative when the Van Nature and Best of Four merger, which started two years ago, was still in full swing. "After a short time at a temporary location, we've been in our new office since March, where the merger continues rapidly," says Ruud.

These new premises have transformed Oxin Growers into a fully-fledged organization, adds Peter Stafleu. He is this Dutch growers' cooperative's Top and Soft fruit, Organic, and Openfield Vegetable Commercial Manager. Peter sat in on the discussion we had with Ruud at Fruit Logistica. Ruud: "I already knew many of the growers and trading companies and many people within Oxin Growers, like Peter. We're in one building now, on one floor, with one canteen. That shortens the lines even more, and there's a positive vibe."

That positive vibe is by no means common to the whole sector at the moment. There are many concerns. At the trade show, the energy topic was foremost in everyone's minds, as were the rising costs for many other things. In his new role, Ruud and his team discuss these issues with growers and traders every day. According to Ruud, Oxin Growers plays the 'sparring partner' role. "Since I started, I've had some difficult conversations," he admits. "It's a good thing this isn't my first fruit and vegetable sector job. I'm used to it by now," he adds, smiling.

Nevertheless, the current market situation is extreme, even for the Oxin Growers team. "Yet we consider it like this: what's not possible today might be tomorrow." Oxin Growers is also dealing with the many external factors as well as possible. And they try to remain well connected within the entire chain even though nobody can really change what is happening. "With what they now know, growers may press for a gas price of, let's say, EUR0.50. A year ago, they certainly wouldn't," says Ruud.

Added value
Oxin Growers is one of the few Dutch growers cooperatives that participated in Fruit Logistica. Why did they choose to do so? Ruud and Peter say they wanted to talk about current issues face-to-face with people, especially now that the market is so tense. Also, Oxin Growers intended to show what added value they have to offer. "And we certainly have that: a bit of payment security, guaranteed sales, trying to find new customers if one unexpectedly disappears. But we're also a discussion partner in the larger ongoing debate," explain the men. "The current situation is quite political," says Commercial Director Ton van Dalen in passing.

Oxin Growers can provide welcome relief for growers who already have to contend with cultivation, energy, and administration. Ruud and Peter don't dare say whether the current crisis will attract growers (back) to such associations. But they do point out the advantages of joining. First of all, in the area of sales, of course. This growers' cooperative has two sales options: growers can be part of a collective using the Connect model or operate more independently using the Unique model. "Unique links growers to trading companies. Within this sales model, we make grower-specific price, quality, and volume deals with customers."

"Growers can do more themselves and have access to an extensive purchasing network for things like fertilizer, hooks, and rope," says Ruud. He explains that, in the Connect model, growers are linked with group-specific agreements. "Oxin Growers manages both models. In Connect, we connect crops and growers, and they share guarantees and risks. There's also collective purchasing of packaging materials, which I do. I buy things like cultivation supplies and packaging." Ruud's background in the packaging industry, thus, comes in handy here.

Looking ahead to winter
Fruit Logistics was postponed from February to April, and no more sales contracts were signed at the event. "In a standard season, those contracts have already been concluded. However, it remains uncertain, and costs are still being discussed. Do you lay down everything for the whole year, or do you build in flexibility for when costs change hugely?" By now, the focus has already shifted to the coming winter. "The first talks about that crop will start soon," says Ruud.

"We'll be talking to growers and clients. Everyone is hoping that matters around energy prices, among other things, will soon become clearer. Nobody knows what they'll do, which makes it tough. You want to provide clarity, especially with lit cultivation, but that's hard at present." In addition to growers and buyers, consumers, too, have a role. "At the end of the day, everyone is in it together; it concerns the whole chain," he says. "Yes, even consumers,″ adds Peter. "We all have to, somehow, bear the rising costs," he concludes.