What happens when plants have stress reactions to touch

A 30-year-old genetic mystery has been solved. It has previously been established that touch can trigger stress reactions in plants. However, the molecular models for explaining this process have been quite spartan so far. Now researchers at Lund University in Sweden have found genetic keys that explain how plants respond so strongly to mechanical stimuli. Cracking this code could help lead to higher yields and improved stress resistance in crops in the future.
When you water your garden plants, they react directly at a biochemical level. When a knife edge cuts a rhubarb stalk, thousands of genes are activated, and stress hormones are released.

Unlike humans, plants can not feel pain, but they still react strongly to mechanical stimuli from human touch, hungry animals, wind, and rain, for example. These external factors lead to the plant's molecular defense system being activated quickly, which in turn can contribute to plants becoming more resistant and flowering later. 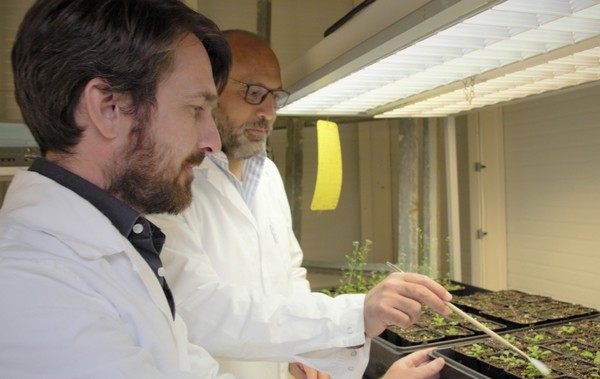 Although the phenomenon has been known since Darwin, there are still many questions. A new study published in Science Advances has examined the complex regulating networks that affect how the plant's defenses are strengthened by external influences.

Genetic screening
"We exposed the plant thale cress to soft brushing, after which thousands of genes were activated, and stress hormones were released. We then used genetic screening to find the genes that were responsible for this process", explains Olivier Van Aken, biology researcher at Lund University.

Previous studies have shown that the plant hormone jasmonic acid is an important mediator in touch signaling. It has also been known that jasmonic acid is only part of the plant's complex network of touch-sensitive responses and that there are several unidentified pathways that have not yet been unveiled. After extensive laboratory work, the researchers were able to identify three new proteins that play a key role in the plants' response to touch.

"Our results solve a scientific mystery that has eluded the world's molecular biologists for 30 years. We have identified a completely new signaling pathway that controls a plant's response to physical contact and touch. Now the search for more paths continues", says Essam Darwish, biology researcher at Lund University.

What possible applications will the new results have? Olivier Van Aken is also studying a centuries-old Japanese agricultural technology that involves trampling grain during the growth phase to obtain more abundant harvests. The researchers believe that there is a lot of hidden knowledge about how mechanical stimuli can lead to higher yields and improved stress resistance in crops. That knowledge can change modern agriculture at its core in the long run.

"Given the extreme weather conditions and pathogen infections that climate change leads to, it is of utmost importance to find new ecologically responsible ways to improve crop productivity and resistance," concludes Olivier Van Aken.