A sounding board of farmers from the Seeland region recently visited Yasai's new vertical farming pilot plant in Niederhasli. They met Daniel Schwab from fenaco Landesprodukte and start-up founder Mark E. Zahran from Yasai. They discussed the opportunities of vertical farming for Swiss agriculture.

Daniel Schwab (fenaco): "I'm very pleased that we can meet here and take your ideas and feedback on Vertical Farming."

Simon Hämmerli (producer): "I find the new possibilities fascinating. At the same time, they are not that far away from agricultural production in greenhouses. After all, agriculture today already relies heavily on technology."

Christian Hurni (producer): "I find the experiment interesting, but I do wonder what it still has to do with my role as a farmer. Do we still need the 'feeling' of being a farmer? It could already be that farmers are increasingly being displaced by technicians." 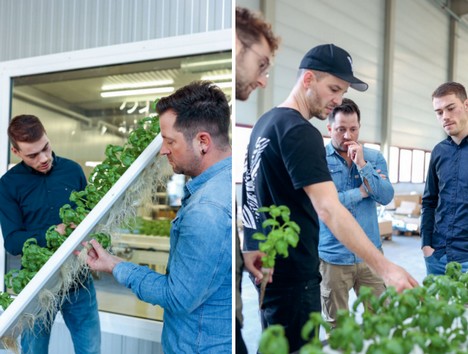 Mark E. Zahran (Yasai): "Isn't it more that we are defining tomorrow's farmer? We see in our day-to-day work in the Vertical Farm that there is very much of a need for agronomic knowledge. You can't underestimate that. It still needs a 'plant whisperer.' We see Vertical Farming as complementary to conventional agriculture. And let's not forget: the idea of agriculture that doesn't interfere with nature at all, that doesn't cultivate, is a misconception. That never existed in the first place. But many people are unaware of that."

Christian Hurni: "This is, of course, an emotional issue, and it's also about the time horizon. Once from the farmer's point of view: Does he have an affinity for the technical, and is he interested in implementing that on his farm? And then, from the consumer's point of view: Are they prepared to eat something that was produced without soil and without sun? But the question is: what can we achieve with this system and what is just impossible?"

Pascal Gutknecht (producer): "It's not black and white. The new technology does have advantages. Heat, hail, floods - we farmers are struggling more and more with extreme conditions. Of course, we are protected against this in the vertical farm. Perhaps the climate will eventually force us to build vertical farms. Another issue I would like to raise is the problem of calories. This has not yet been solved. Here in Niederhasli, we are currently only producing Basil. With today's farms, we can't produce calories on a large scale yet."

Mark E. Zahran: "Basil is the start, soon to be followed by cilantro and parsley, but leafy vegetables and berries are also in the pipeline. When it comes to producing calories on a large scale, such as potatoes, we are working with production agriculture to focus on
new approaches. For example, we could grow seedlings in the vertical farm, which would go into the greenhouse or into the ground when they reached a certain size. This would make it easier to produce leafy vegetables, for example, in faster cycles and more profitably." 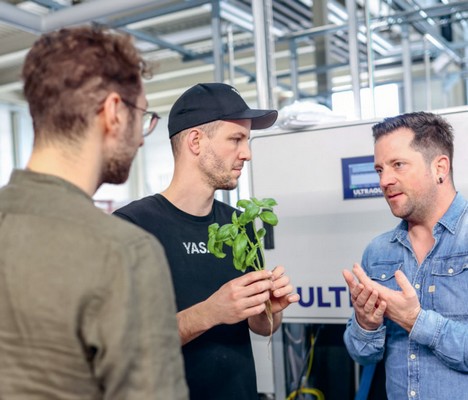 Pascal Gutknecht: "I find the production of young plants with vertical farming on our own farm an exciting approach. When it comes to sourcing young plants, we are very dependent on individual suppliers. If there are problems there, for example, with pests, this spreads to many farms. With our own production, this risk is much smaller."

Daniel Schwab: "These are exciting prospects that we would like to explore further with you. Thank you very much for the interview. I look forward to seeing the first vertical farming system on a Swiss farm one day. Because new technologies should be given a chance, that's why we at fenaco are examining technical feasibility and market acceptance. And are thus possibly opening up a new business field for our members."