"The war in Ukraine is adding to a general consumer restraint"

Thanks to excellent weather conditions, Landgard member farms in the west were able to start harvesting German greenhouse strawberries from production as early as the end of March this year. "Since the end of April, fresh strawberries from West German tunnel production have meanwhile also been available in stores," Arthur Heinze, Fruit Sales Manager at Landgard Obst & Gemüse
& Co, explains.

As every year, the further course of the strawberry season depends primarily on the weather. "Especially around the Ice Saints, situations like frost or hail are, after all, never completely ruled out. But if we are spared from them, from mid-May, we can look forward not only to the first outdoor strawberries from the Rhineland but also to an optimal start to the season, both in terms of quantity and quality," Heinze continued.

The strawberry season in North Rhine-Westphalia was officially opened back in mid-April by Christoph Nagelschmitz, President of the Provinzialverband Rheinischer Obst- und Gemüsebauer e.V. (Provincial Association of Rhineland Fruit and Vegetable Growers), and Dr. Heinrich Bottermann, State Secretary in the Ministry of Agriculture and the Environment of North Rhine-Westphalia, at an event held at the farm of Landgard member company Frucht Janssen in Viersen. The Frucht Janssen company had prepared the event with a lot of commitment, creating a successful and beautiful setting for the official opening of the strawberry season. 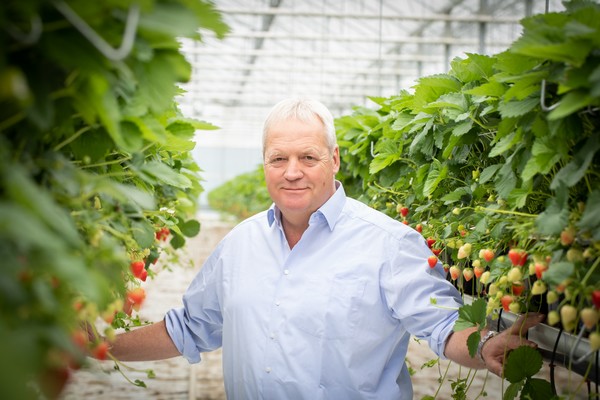 Strawberries from the left Lower Rhine
On Volker Janssen's farm, strawberries are harvested continuously between April and December on 13 hectares of cultivation area, including 5 hectares under glass and heated, 4 hectares unheated foil greenhouse, and 4 hectares foil tunnel and marketed via Landgard. In addition, there are 6 hectares for young plant production. In 2021, the farm reached a production volume of just under 950 tons of strawberries.

Production focuses on the two varieties, Elsanta and Malling Centenary. In addition, new varieties are always being tested. "Our popular classic Elsanta is a firm strawberry variety with a good shelf life. The fruits have a sweet taste and a strong strawberry aroma. Externally, the strawberry fruit bears a glossy red color, while inside, it is red with a white core demarcation," says Volker Janssen.

In production, the Frucht Janssen farm relies entirely on protected cultivation with covers over the fruit. This provides optimum protection against weather influences such as wind, rain, and strong sunlight.
In addition, the free-hanging plants grow in a gutter system at a height of 1.5 meters in 100 percent coconut husk substrate and without touching the ground.

Volker Janssen views the 2022 strawberry season with mixed feelings. On the positive side, there are currently no more significant restrictions for his farm due to the Corona pandemic, and problems with the availability of seasonal workers are also only a minor issue. "Despite all the restrictions and constraints, the two Corona years were beneficial for the strawberry sales. Consumers* attached importance to regional production as well as good and fresh food and were also willing to spend money on it. In the meantime, the focus is already shifting back to spending more money on travel. And the war in Ukraine has led to a general consumer restraint," says Volker Janssen. 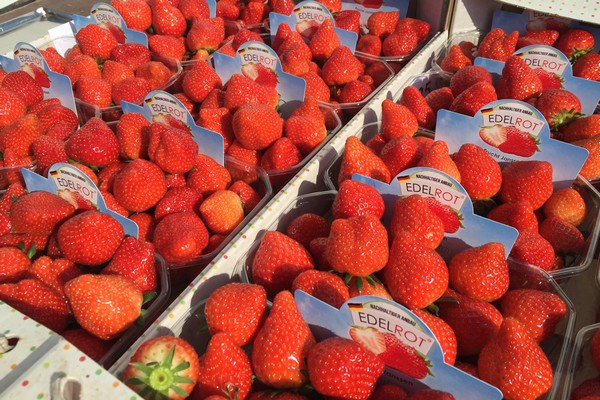 High production volume, lower demand
At the same time, production costs have risen by about a third due to price increases in areas such as minimum wage, substrates, fertilizers, energy, and fuel. Since the higher costs are not fully passed on to consumers, the price pressure for farms automatically continues to increase. "This is where an unabatedly high production volume meets lower demand. Some farms will probably not survive this development, which will further fuel the structural change in agriculture towards fewer but larger farms," says Volker Janssen.

The food retailer's stipulation that only five active ingredients must be
only five active ingredients may be detected in agricultural products also poses a problem for farms, according to Janssen. "This requirement significantly restricts our options for action in cultivation. As a result, qualities also suffer when it comes to being able to react appropriately to plant diseases," says Volker Janssen.

'Turning away from greenhouse cultivation conceivable'
The high energy prices could, Janssen continues, could lead to a move away from cultivation in heated greenhouses. "This would reduce the time window in which strawberries from Germany are available on the market would available on the market would inevitably be shortened," Volker Janssen concludes.