The shift in Easter/Passover dates from early- to mid-April moved holiday dollars from March to April, and as such, from the first to the second quarter. Easter is typically a big selling season for fresh produce and was the most disrupted of the major holidays in 2020 when most states were under shelter-in-place mandates.

Inflation not only took the headlines for the Easter holiday but also dominated everyday spending. “The April 2022 IRI survey of primary shoppers found that 90 percent of consumers believe food prices are somewhat or a lot higher than last year, of whom 96 percent are concerned about it,” said Jonna Parker, team lead fresh for IRI. 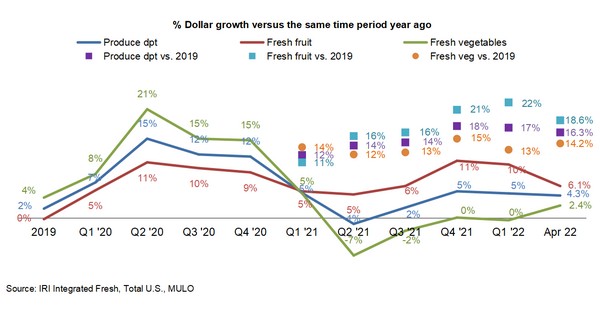 As a result of inflation, consumers are taking measures, according to the April IRI survey:

“These consumer money-saving measures combined with the continued volatility on the supply side are creating an environment of continuous change and uncertainty,” said Joe Watson, VP, retail, food service & wholesale for IFPA. IRI, 210 Analytics, and IFPA continue to bring the latest trends and analysis relative to the produce department.

Fresh produce prices were also up from last year, at a +8.7 percent level on a per unit basis and +10.1 percent on a per pound basis.

April 2022, fresh produce sales reached $5.7 billion, surpassing the record set in 2021 by 4.3 percent. Month-over-month, April sales were slightly higher than March, likely because of the shift in Easter/Passover timing.

The changes in the timing of Easter/Passover prompted ups and downs in the individual April weeks. As Easter fell on April 4th last year, sales were down year-on-year the first week of April. 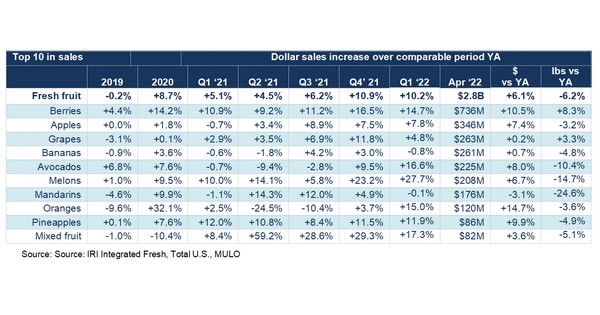 April was the first time vegetable sales were decidedly above year-ago levels since the second quarter of 2021.

“April saw continued dominance in berries with sales more than double that of the second-largest seller, apples,” said Parker. “Pineapples were the Easter seasonal highlight, but grapes were the only other category to achieve volume gains.”

“Seven out of the top 10 vegetable sellers grew sales versus a year ago,” said Watson. “Pound sales were down for most fresh vegetables, with a few exceptions, being potatoes, onions, and cucumbers.”

The next report, covering May, will be released in mid-June.