Vitensa continues with new cultivation and in new style

Vitensa in Vierpolders, Netherlands, became an official organic tomato and cucumber grower at the end of April. The company of Dennis van der Knaap and Robin Grootscholten has switched from the regular snacking tomato crop. After the 2.8 hectares of tomatoes and 2.8 hectares of cucumbers, another 1.4 hectares will be planted with cucumbers in two weeks. This will bring the organic area of the company to 7.2 hectares. "It is a big step," says operational manager Geert Visker, who sees plants in the greenhouse again after six months. "Switching over is a huge challenge."

"In the market for cherry tomatoes, we were able to keep up just fine. But with an eye to the future, we were going to become an increasingly smaller player. That is why we started to look into organic cultivation. We went to see other companies and spoke to the Harvest House marketing organization, and they were enthusiastic. We conclude that organic is the future. There is a growing group of consumers who want to know: where does my food come from? Organic cultivation is more expensive, but the consumer is increasingly willing to pay a little more for it." 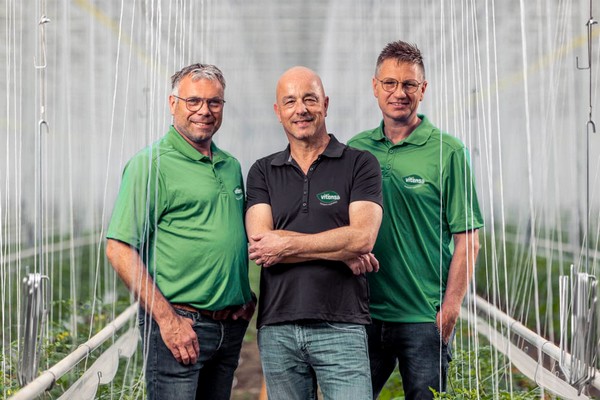 Rebuilding
It is the beginning of a hectic six months. Immediately after the last cherry tomato crop was finished, a major renovation was carried out in the greenhouses in Vierpolders. Geert: "We drained the soil, installed new watering systems, and heated the soil. Walls have been erected between departments in order to better control the climate. A contracting firm dug and milled the soil. After that, compost was put in to ensure that the soil was revitalized. This was all done in six months. We thought we were in for a quiet period. To make the switch is a huge challenge, but it also gives us new energy."

Fathers got the scoop
On 26 April, the first tomato plants could be planted. Owners Dennis van der Knaap and Robin Grootscholten left that first scoop to their fathers. André van der Knaap and Peter Grootscholten were there when tomatoes were originally grown in the ground. Now, there are vine tomatoes, cherry tomatoes, mini-vine cherry tomatoes, and cucumber plants on the farm. They will soon be joined by another organic cucumber crop, which will fill the 7.2 hectares. Geert: "The idea is to rotate the crops every year to give the soil time to recover. We could also grow peppers or aubergines as an extra crop, for example." 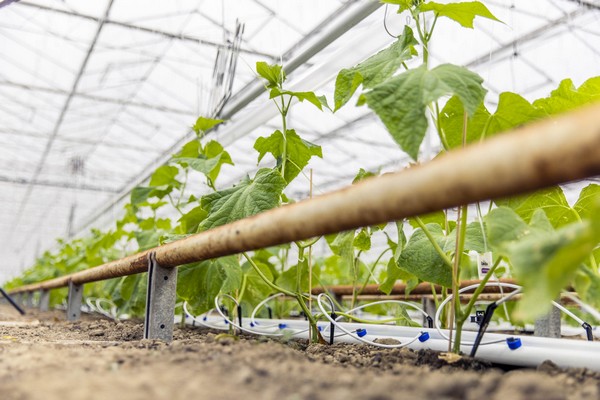 Getting used to it
Will it take some getting used to, a different way of growing? "Fortunately, we have a good crop consultant. And at Harvest House, there are more organic growers we can fall back on. So we expect to get the hang of cultivation soon enough, even though it is all new to us. With rock wool cultivation, you know exactly what to expect. With soil cultivation, the roots of the crop go much deeper. You get a completely different root system; nicely branched, as we have already seen in a test set-up. The expectation is that the plant will grow more calmly when grown in the ground." 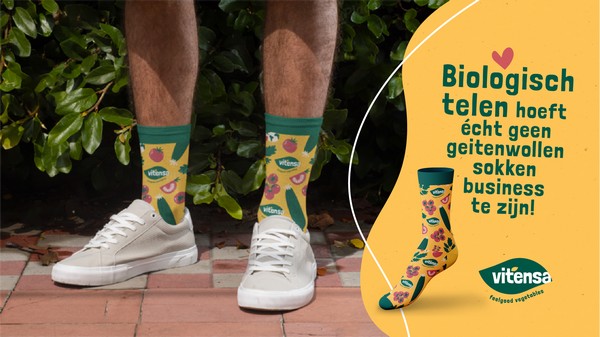 Striking parcel with socks
There is a demand for organic products. "Harvest House has already found customers for us. Especially the last few years in the snack tomato business, we had little contact with customers. But the nice thing is that customers are now coming to see the company again. By switching to organic cultivation, the bond with the customers has returned completely."

The changeover has certainly not gone unnoticed by the company's business relations. In the first week of May, they received an eye-catching parcel at home with a pair of socks and the theme 'With our organic cultivation, we are totally in fashion'. In this way, Vitensa also drew attention to the new house style that was developed during the switchover.