On Friday, Fossa Eugenia celebrated its 25th anniversary in style. Ton Holthuijsen, the Dutch growers' association's figurehead, handed over the chairmanship to Peter van Dijck and was himself crowned honorary chairman.

The association is grateful to Ton Holthuijsen for all his work in the past quarter-century. Together with many others, he has made Fossa Eugenia what it is today, putting it on the map. Ton will remain associated with the organization as an advisor.

Ton was also knighted in the Order of Orange Nassau last week. That shows that not only Fossa Eugenia but others too appreciate him. Ton's role within the cooperative but also for regional horticulture has not gone unnoticed. In recent years Ton has also dedicated himself to other community interests, usually as chairman. 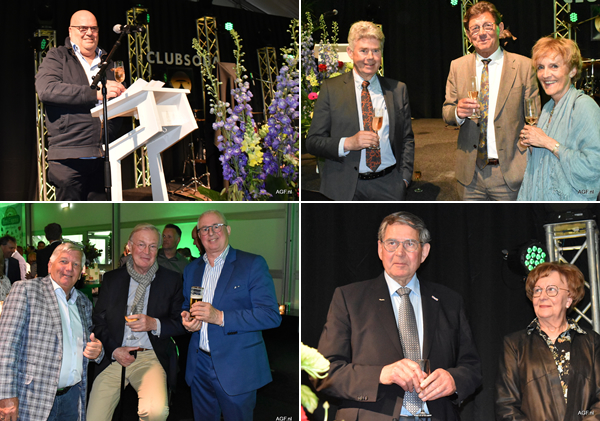 The day's chairman, Simone van Trier, introduced the various speakers at the event. They included Léon Faase of the Limburg Agricultural and Horticultural Association (LLTB), which represents farmers' interests in [the Dutch province of] Limburg.

Everyone pointed out Holthuijsen's positive attitude and working method. Some of the speakers have been acquainted for 40 years and have been through a lot together. They shared the auction developments in the 1990s and the eventual establishment of Fossa Eugenia.

Ron de Greeff mentioned that Limburg used to have as many as ten cooperatives. In 1990, two of these, VGV and CVV, merged to form the South-East Netherlands Cooperative (ZON). ZON was not part of the larger amalgamation round later in that decade.

Ton chose to look further. Trade and cultivation are two disciplines. But he aligned small and large growers' interests and, in 1997, founded Fossa Eugenia. The cooperative's memoirs show that under Ton's leadership, sales were professionalized, contacts with retail were established, and a way into the CMO matter was sought.

Ton was considered a walking encyclopaedia and a well-read global citizen. Erik Gipmans found Ton very clear and forward-thinking: "With him, what you see is what you get." Ton often oiled the cogs between different parties.

One could write a book about that, which has since happened. And the evening's guests were gifted a beautiful hardcover copy.

Jan Rotmans gave a talk about how to learn to live with chaos. That often, chaos must first be created before steps can be taken. Once the official part was over, the guests enjoyed a sophisticated dinner paired with wines. Perhaps Ton Holthuijsen, a wine connoisseur and culinary specialist, chose the wines himself. Perhaps not. What we can say is that it was a pleasant evening with live music and lots of chatting.

See the photo report here to get an impression of the evening.