A new study examining a range of environmental impacts of vegetable production and distribution found that local production offers significant benefits overall compared to the large-scale methods that represent most of the current vegetable sales to supermarkets.

An article on the research findings by scientists at Iowa State University was selected as Editor’s Choice for 2021 in the “Journal of Sustainability.”

Tiffanie Stone, a graduate student in the environmental science program housed in the Department of Natural Resource Ecology and Management, co-authored the publication with Jan Thompson, Morrill Professor of natural resource ecology and management, Kurt Rosentrater, professor of agriculture and biosystems engineering, and Ajay Nair, professor of horticulture. Their research focused on small- and medium-scale vegetable production in Iowa compared to large-scale vegetable production in places like California.

Stone worked with horticulture specialists at the university to quantify the greenhouse gas emissions, energy requirements, and water use of plants throughout production, transportation, and consumption. She developed a Life Cycle Assessment, or LCA, for 18 types of vegetables using existing software developed by CleanMetrics 2.0. LCA helps researchers understand the environmental impacts of crop production and measure the amount of greenhouse gas emissions that occurred across every stage of crops’ life cycles. 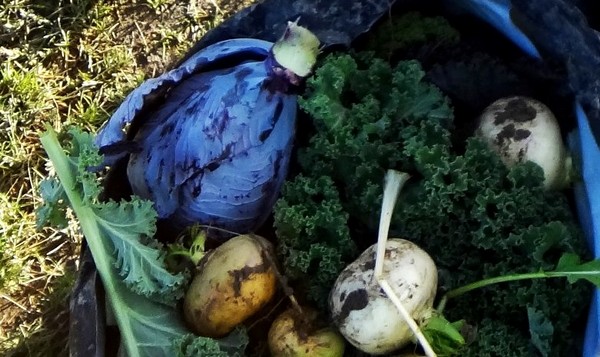 She analyzed each type of vegetable in three different food system scenarios: large-scale, conventional production that accounts for most of our nation’s food supply, medium-scale production similar to direct-to-consumer operations in urban Iowa; and small-scale production intended to provide for an individual household.

“We wanted to understand how the vegetables we typically find in the grocery store differ from vegetables produced in the state and the ones grown in home gardens,” Stone said. “Since 50% of vegetables in the U.S. are produced in California, our large-scale scenario included transportation from that state, and production usually included more mechanization.”

Results from the LCAs show the large-scale production model had significantly greater global warming potential in all stages of food production and distribution than that of the medium- and small-scale production models. This conclusion was made by totaling the greenhouse gas emissions from cropping inputs, fuel, packaging, and shipping. The vegetables assessed in large-scale food system conditions also demanded much more water than the ones evaluated under the small- and medium-scale food system growing conditions.

“In this study, typical Iowa vegetable production produced less than half the emissions and used 10% of the water than that of conventional food systems,” Stone said. “Since about 90% of table food is imported from outside of the state, we concluded that increasing local vegetable production and consumption should be a part of conversations about reducing greenhouse gas emissions and water use.”

Thompson noted this study is a part of a larger project where researchers use more models to assess a greater number of production factors.

“There are also potential social benefits to small-scale food production – such as more direct connections between producers and consumers – and economic opportunities for local producers who use practices that are less impactful to the environment,” Thompson said.

In terms of economic impacts, Stone said a report by the Economic Research Service and the USDA indicates that only 7.6% of food in the U.S. is currently sold through local food channels. Nonetheless, sales from farmers markets, regional food hubs, and farm-to-school programs grew by 180% to 488% between 2006 and 2014.

Based on the research, Thompson and Stone are confident in the environmental, social, and economic potential of localizing and reducing the scale of food production.

“Producing more food locally is a way to develop a food system that is more resilient and has fewer impacts, in addition to providing fresher, more nutritious food,” Thompson said.