Since April, the pandemic prevention and control situation in many places in China has been severe, resulting in poor sales of many varieties of peppers, and the market has been in a downturn. However, the imported Indian peppers are facing a different trend, and the transaction price of Indian peppers has risen again and again. 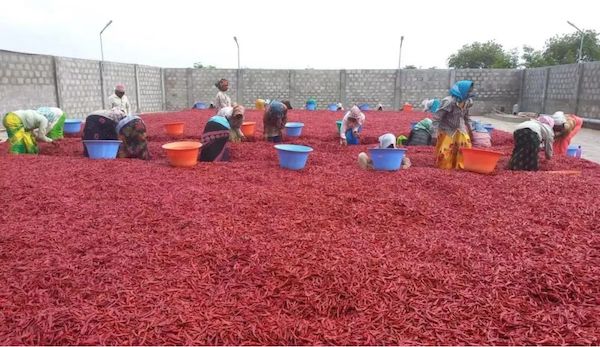 India's domestic prices rise and fall, curbing import enthusiasm
Due to the double blow of heavy rains, along with pests and diseases in the growing season, the domestic production of new-season peppers in India has experienced a severe reduction in production. Therefore, the price of the S17 often rose due to the frequent hype in the market.

Although the price will drop to a certain extent when the number of products in the market increases, overall, the price of S17 shows a trend of rising and falling. It is precisely because the price of new-produced peppers produced in India remains high this year, while the price of S17 produced in China is not high. The inversion of production and sales at home and abroad has also suppressed the enthusiasm of Chinese importers, and the import volume of S17 peppers has also been greatly reduced. Relevant data show that the import volume of Indian peppers in February this year decreased by 23.37% compared with the same period last year.

Inventory of Indian peppers is low, and transactions have shifted to new-harvested peppers
Due to the high price of new S17 domestically produced in India, and with the stimulation of unbalanced production and sales, China's orders for S17 new peppers have been relatively small, so before April, China mainly consumed in-stock Indian peppers. With the continuous progress of the transaction, the supply of S17 has become tight, and the price of new peppers in India is still on the rise. With the continuous reduction of in-stock Indian peppers, transactions in April gradually shifted to new peppers. However, the import cost of new peppers is relatively high, and the arrival volume of Chinese ports is not large, so the sellers are generally asking for higher prices.

Weak domestic demand and limited consumption of products
Due to the current domestic pandemic affecting terminal consumption, there are fewer buyers who intend to inquire, and the overall demand is also limited. In the case of insufficient follow-up efforts on the demand side, the inclination of dealers to support prices and sell goods has also decreased recently.

However, on the whole, the price of S17 in India has risen significantly recently, but it has not stimulated the enthusiasm for the domestic terminal market. Poor demand has led to a slow absorption of the port supply.