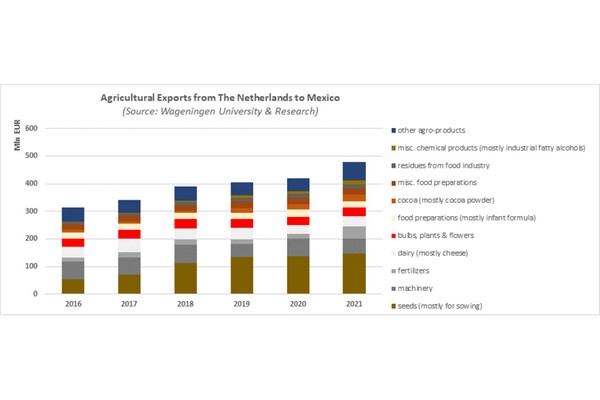 Mexico second-largest buyer of Dutch vegetable seeds
Vegetable seeds remain on top of the list of Dutch agro-export products to Mexico, with a total export value of € 146 million. Benefiting from the impressive expansion of Mexico’s horticulture sector and the good reputation of Dutch seed companies, the export value of seeds has more than tripled over the last 6 years: in 2015 it was barely € 47 million. In 2020, Mexico even become the second-largest importer of Dutch vegetable seeds, right after Spain.

Agricultural equipment keeps its second place, with almost € 55 mln of export value in 2021. An interesting export product to watch is cocoa powder: Dutch cocoa powder exports to Mexico have seen consistent growth over the last years, and its export value is now at the same level as infant formula, around € 23 million.

Mexican limes have lost much of their export value to The Netherlands: In 2021 Mexico only exported € 20 million of limes, which is about a third of the amount it used to export between 2016 and 2018. More attractive lime prices in the US are probably to blame for the falling exports to The Netherlands.