The Netherlands can rightly be considered a solid German retail and foodservice partner. From 2016 to 2021, Dutch fruit and vegetables sales' value to German customers increased by almost 30%, to €4.9 billion, according to Wilco van den Berg, responsible for Markets & Statistics at GroentenFruit Huis. 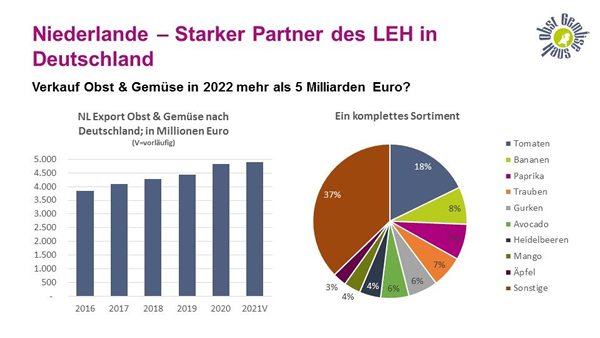 The Netherlands supplies a full range year-round, but tomatoes (18%) lead the way in those sales, by far. Bananas (8%) and bell peppers (7%) follow. Products grown in the Netherlands, like tomatoes, peppers, cucumbers, and pears, are combined with products from further afield. These include bananas, avocados, grapes, mangoes, and blueberries.