Start of white radish and radish harvest in Knoblauchsland

The radish and radish harvest in Nuremberg's Knoblauchsland is now slowly picking up speed, as Stefanie Häring of Gemüsebau Ruff-Häring. tells us. "Last weekend, about a week later than last year, we were able to harvest the first white radishes in the greenhouse, while the first radishes from the foil tunnel have already been available for two weeks." It is so far only about smaller quantities, which are sold through the local wholesale market to resellers and specialty retailers." 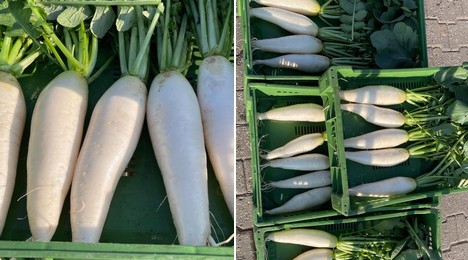 Despite noticeable cost increases in production, the first white radish of this season is similar to last year at about 1.60 euros apiece. "At the beginning of April, we will probably be able to deliver the first volumes to regional food retailers," Ms. Häring predicts. "Due to the production in the glasshouse, we are one of only a few suppliers in the wide-area that can already offer fresh white radishes from our own plots, which is why we have a great unique selling proposition. We're also seeing that wholesale customers have been specifically asking for white radishes for several weeks now." 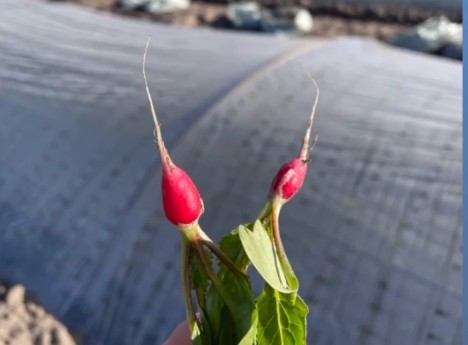 Heated tunnel cultivation for the first time
After completion of the greenhouse harvest, tunnel crops will continue seamlessly from April, and the first open field white radishes are expected to be available at the beginning of May until the end of the season in June. Parallel to the white radish harvest, foil radishes have been diligently harvested for about two weeks. "For the first time, we have decided to grow them in a heated foil tunnel because we have identified an interesting marketing potential. Compared to white radishes, the competition is much greater here, as numerous direct marketers in the region are involved in production and marketing." 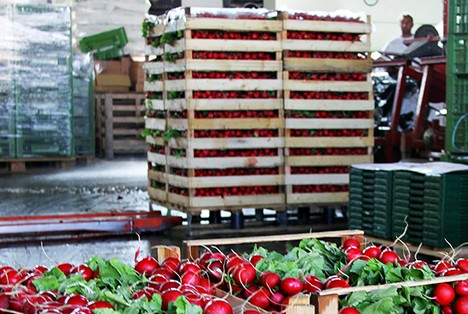 Red radishes of the Donar variety are offered at 0.80 euros/bunch

Open-field produce can be offered until October, Häring states. "Depending on the demand in the trade, we would plant a few more plots in the heated foil tunnel at the end of the season, so that we can extend the campaign a little further out at the back. That's yet to be determined, though."