"This greenhouse cannot be compared with conventional glasshouses"

Until now, the Austrian bio-brand Ja! Natürlich has completely avoided Austrian grown organic greenhouse vegetables due to the high energy requirements caused by heating and lighting. It has relied on imports from nearby countries as a more climate-friendly option due to the lower CO2 footprint. Now a solution has been found to meet consumers' intense desire for organic vegetables from Austria even in the colder months: BIOhof Geinberg, a greenhouse dedicated for organic growing, started cultivation of organic tomatoes, organic peppers and organic cucumbers in Austria.

According to the team, the construction work at the Geinberg site has been completed, the employees have been instructed and production is already in full operation. "The many hours of sunshine in February and March really allowed our plants to thrive and grow", the team says. "Our special snack cucumber, unique in taste, is already being harvested and is already enjoying great popularity." Turn-key supplier Gakon-Netafim realised the complete project. 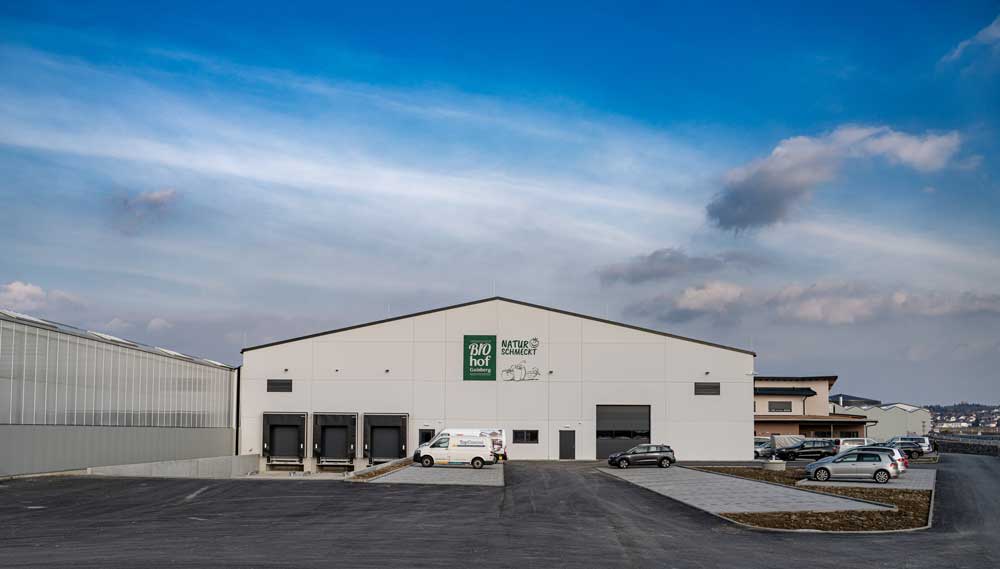 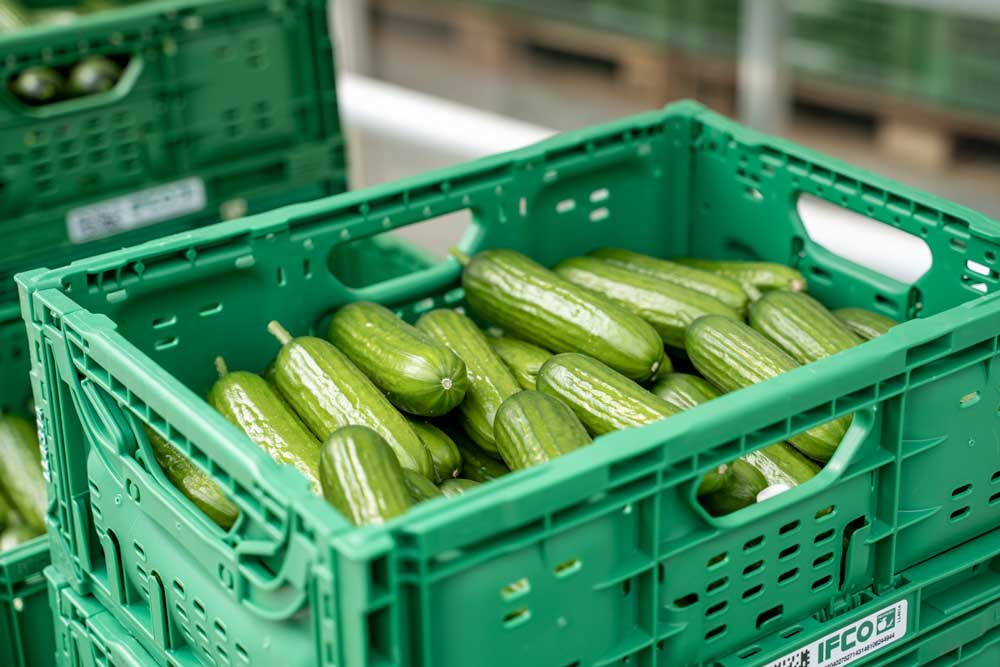 CO2-neutral way
"Until now, Austrian organic Ja! Natürlich vegetables were only available during the summer months, as the high energy requirements were not compatible with Ja! Natürlich's sustainable standards. But this greenhouse cannot be compared with conventional glass houses - for one thing, because the heat for heating can be extracted from the earth in a CO2-neutral way and no new drilling is required for this. For another, the plants in Geinberg are grown in the fertile soil of the region. This is in contrast to conventional greenhouses, where the roots are supplied via a nutrient-rich substrate," says Ja! Natürlich managing director and agricultural expert Andreas Steidl, explaining the changeover. 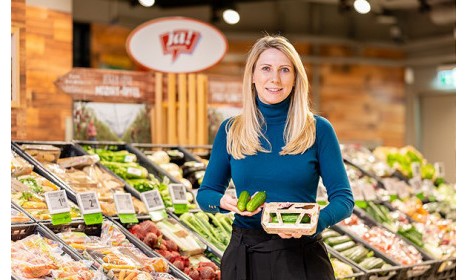 In the new 11 ha greenhouse, the geothermal energy already available in the village is used for CO2-neutral heating. This makes it possible to harvest organic tomatoes, cucumbers and peppers regionally even over the colder months from early March to early November. "Without any additional burden on the climate", Andreas adds. "And the highest Ja! Natürlich standards, such as soil health through crop rotation and plant-based composting, are ensured throughout, also in the greenhouse."

Climate-friendly thanks to holistic energy and irrigation concept
The new greenhouse not only has sustainable heating from existing geothermal energy, for which no drilling was necessary. There is also a photovoltaic system on the roof. Rainwater is collected in large-scale basins for watering the plants, thus ensuring the self-sufficient irrigation of the new site. Optimal heating also prevents humid air, which prevents fungal diseases in the plants. The glass ceiling provides perfect lighting conditions, making all artificial light sources obsolete. 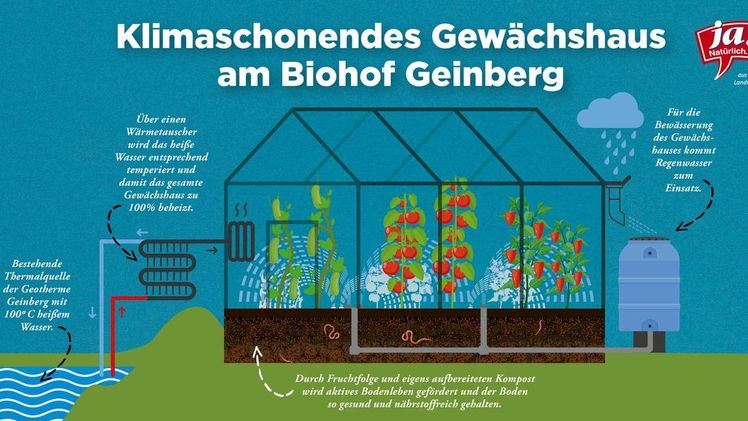 "Together, the two experienced fruit and vegetable producers of the Steiner and Perlinger families in the Innviertel region have built one of the most modern and environmentally friendly greenhouses in Europe on the already existing geothermal source", the team concludes. Indeed: the project is a collaboration of two families known very well in the German / Austrian greenhouse industry, and so are the companies Steiner Gemüsebau and Perlinger Gemüse. "“We knew that if we wanted to grow in Austria, we would work with them, joining our efforts on production and sales. It is hard to believe that we started making plans last February, and not even two years later we are harvesting the first tomatoes and peppers from our joint project", they shared last year.

The two managing directors Patrick Haider and Wolfgang Steiner are constantly convinced of the good growth and the great organic quality. "In one of the most modern and environmentally friendly greenhouses in Europe, organic tomatoes, organic peppers and organic cucumbers are grown in soil on an area of ​​11 hectares, carefully tended by our employees and only ever harvested when fully ripe. That makes the difference in quality and taste", they say. 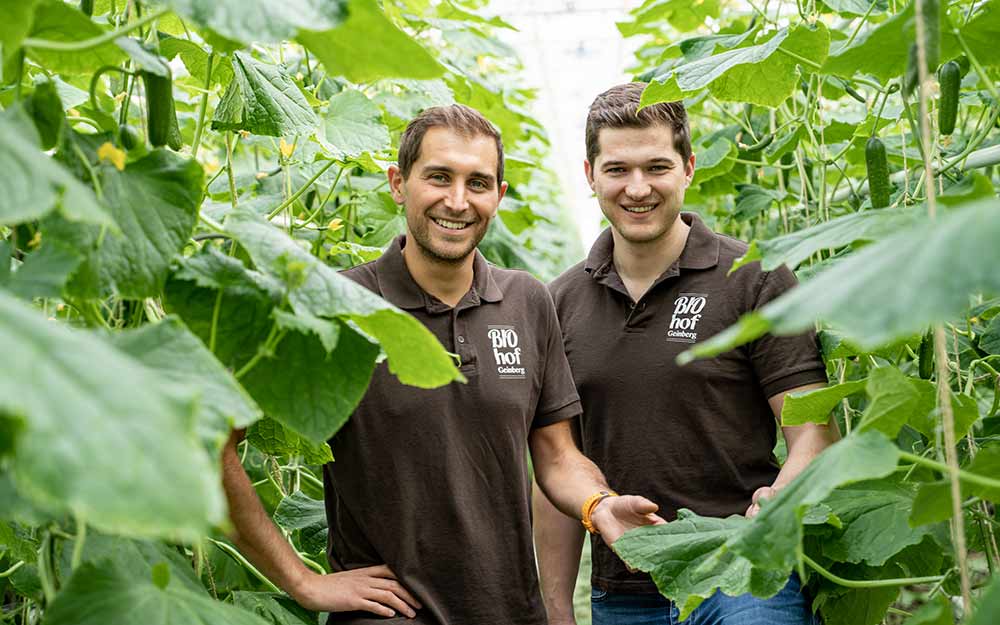 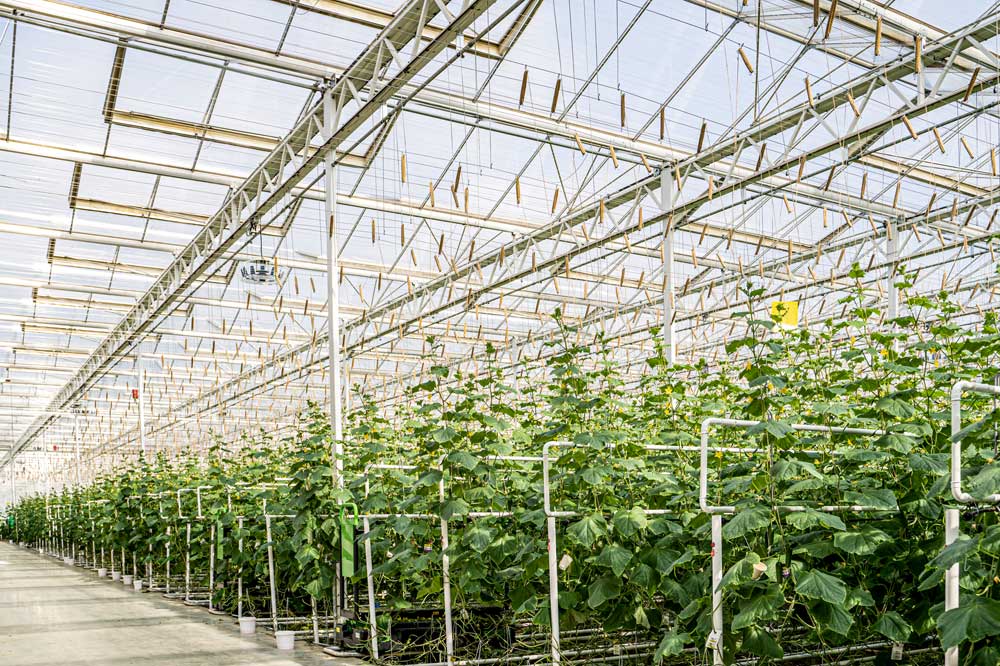 No artificial lighting
No harvest is possible in the darkest months of the year, December and January, as Ja! Natürlich deliberately avoids energy-intensive artificial lighting. "From spring to fall, Ja! Natürlich tomatoes, cucumbers and sweet peppers from the organic farm in Upper Austria can now be found on the shelves of Billa, Billa Plus and Adeg without having to compromise on the high Ja! Natürlich organic standards. For example, pest control in the real soil is also handled by beneficial insects - ichneumon wasps, predatory mites, ladybugs and lacewings are among the most important helpers in the new greenhouse. Pollination of the tomato blossoms is taken over by soil bumblebees in Geinberg," says Ja! Natürlich Managing Director Klaudia Atzmüller happily.

Healthy soil even in the greenhouse
"We place a particular emphasis on excellent soil quality and ensure this through a variety of natural measures; for example, earthworms ensure healthy soil life right from the start. We also set high standards for the quality of organic fertilizer: We only use bio-fertilizers whose raw materials come from organic farms, such as sheep wool pellets from organic sheep, because not all bio-fertilizers are the same. But also the plant waste is composted at the end of each cultivation period. They then serve as valuable compost in the new crop. Another special feature is crop rotation, which Ja! Natürlich also relies on in the greenhouse: The same crop varieties are only grown on the land every three years to keep it healthy and fertile. This is the only way to ensure sustainable, long-term cultivation in line with the natural cycle," Steidl explains.

As of now, Ja! Natürlich mini cucumbers from the greenhouse are available for €2.79 at Billa, Billa Plus and Adeg in eastern Austria. Tomato and pointed peppers will follow in a few weeks.