The Australian Government has announced a series of temporary visa measures as an incentive for fully vaccinated Working Holiday Maker visa holders to return to Australia as soon as possible to help address current workforce shortages caused by COVID-19.

The horticulture industry, along with many others, has been crippled by labour shortages since the outbreak of the pandemic, particularly because international and state borders have closed at times, restricting the backpackers who make up a significant part of the industry's workforce from entering or relocating. It has caused fresh produce to be thrown out or left on trees, or significantly extra costs to employers to get it harvested. It has only been compounded by the surge in cases of the Omicron variant that has kept pickers, packers, supply chain workers, distributors and retail staff at home.

Prime Minister, Scott Morrison says there are around 23,500 backpackers who have visas to come to Australia right now, and he is encouraging them to get on the plane, as borders are now open to them.

"My message to them is - come on down," he said in a press conference. "Come on down now, because you’re wanted. Come to Australia, you’ve got your visa. We want you to come to Australia and enjoy a holiday here in Australia, move all the way, all the way around the country, and at the same time join our workforce and help us in our agricultural sector, in our hospitality sector, and so many of the other parts of the economy that rely on that labour, that workforce right now." 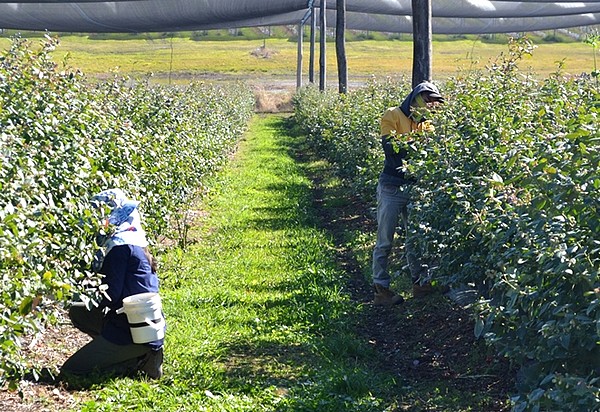 He added that the government will be supporting that with $3 million to Tourism Australia to support a marketing program to target backpackers and students to get them to travel to Australia. For backpackers, if they turn up within the next 12 weeks, they will get their visa application fee (currently AU$495) rebated by the Department of Home Affairs. That also applies to those who apply under a new application, are successful, and turn up in the next 12 weeks.

In addition, until the end of 2022, there will be no limit on the length of time Working Holiday Makers can work for the same employer. Treasurer Josh Frydenberg says the above measures are temporary and designed to provide immediate assistance to Australian businesses that are currently facing critical workforce shortages, to enable them to continue delivering goods and services to the community.

All international arrivals must be fully vaccinated or hold a valid medical exemption, and Mr. Morrison says that when they turn up at the border, they will face the same quarantine arrangements that are enforced and required by the states.

"For New South Wales and Victoria, that won't be as big an issue, he said. "Other states, I would be encouraging to look at those rules to ensure that they can get those critical workers in because the clear medical advice, you're more likely to catch that from somebody who's already here. And so if we're only allowing, as we do, vaccinated people in the country; they've already taken that precaution and they present a lower risk. And so I think that commends itself to a relaxation of those quarantine arrangements for vaccinated arrivals."

Lack of RATs threatens annual harvest and year-round supply
Australia's peak apple and pear industry body is calling on governments to ensure Rapid Antigen Tests (RATs) are prioritized for the ag sector alongside other critical industries after several states announced improving supplies of the tests.

APAL says in the past week Victoria confirmed it has received the first 3 million of 44 million RATs and NSW anticipates it will have an additional 15 million tests in the next week.

“Our industry needs assurance that the federal and state governments’ plans to distribute the tests recognize the critical and urgent needs of our industry,” CEO Phil Turnbull said. “Our trees don’t have an off button – we can’t just shut down operations while we wait for access to more tests. Our crops have one annual harvest that is already underway in some regions. Growers in all regions are reporting that their limited labor supply is being cut by as much as 40 percent because the staff is unable to access tests. We are already experiencing a shadow lockdown as massive numbers of staff are forced to remain in isolation."

Mr. Turnbull says he looks forward to the federal and state governments confirming how they will prioritize and distribute the increased supply of tests to the ag sector to minimize disruption to the harvest and alongside the needs of other critical industries.