"Year-round snack cucumbers thanks to an optimal LED light recipe"

Cucumber grower Ad Verhoeven from the North Brabant town of Prinsenbeek supplies consumers with snack cucumbers all year round. He does this together with his team of 20 permanent staff and 60 temporary workers. Thanks to 11,000 LED lamps and an optimum lighting recipe, he manages to keep his snack cucumbers thriving and to save 40-45% of energy. 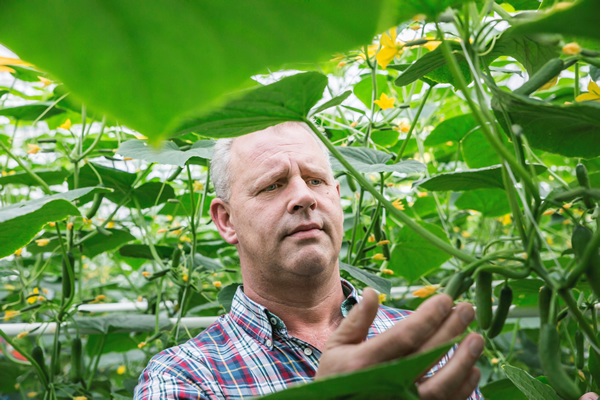 "At the time, I was the first grower in the world to switch over completely to LED lighting; that was five seasons ago now. In the greenhouse, LED lamps are better in terms of energy consumption and climate compared to traditional SON-T lamps. However, both energy consumption and temperature became too high. To create the ideal temperature for a cucumber (23-24 degrees during the day and 19 degrees at night), we had to open the windows. Then the CO2 and excess heat fly right out of the greenhouse. I didn't want that anymore. That's why I switched to LED lamps. They last about ten years and after five to six years you've recouped your investment.

Experimenting and figuring it out
"Growing with LED lights was new at the time. Together with the supplier, I figured out the optimum light recipe. At the start, the plant didn't feel well and didn't produce the output I wanted. We experimented with temperature and humidity, but that didn't help sufficiently.

So we started trials with light spectrums. First, we used a combination of a little blue and a lot of red light. After four years of experimentation, we finally found a spectrum that works well; a combination of green and far-red (comparable to evening red) light. You can't see the latter with the naked eye, but the plant can - very bizarre.

The 'little miss' among cucumbers
Pioneering is in Ad's blood. He was the first in the Netherlands to start growing snack cucumbers. "I was used to growing regular cucumbers, but the snack cucumber really is a different story. That 'little miss' is not easy to keep happy; this plant is a bit more sensitive. Not only the plant, but also the consumer must be satisfied. The investment in LED lighting is a challenging one, but in principle, you are doing it for the end customer. By controlling the climate in the greenhouse, we are now reliable in terms of volume and quality and we supply sustainably grown snack cucumbers all year round."