The new year started with dominant Spanish shipments, more prominent that Turkish and, in some cases, lower-priced Moroccan sweet peppers. Sales remained manageable due to the ongoing school holidays and the cautious approach of the catering trade. According to the BLE, in many places smaller stocks were formed due to both a reduced demand and Spanish shipments, which in Hamburg for example, did not allow any markups. In Cologne, the picture was similar, as the week began with discounts on Spanish goods. It took several days for prices to increase again. 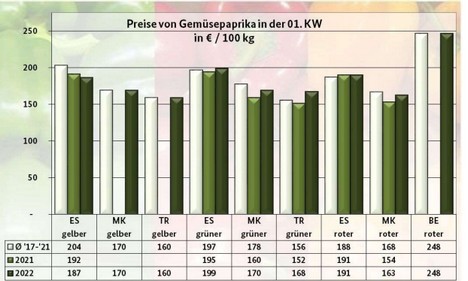 Also in Cologne, traders offered appealing orange goods from the Netherlands and red products from Belgium. On the other markets, wide-ranging shipments from Turkey supplemented the assortment. In Frankfurt, customers were expected to pay €7 to €11 per 5-kg crate and €0.60 to €0.79 per 400-g foil bag.

Apples
Business was very quiet after the turn of the year. Availability was more than enough to meet the steady demand.

Pears
A leisurely pace of sales was observed. Since the fruit left nothing to be desired in organoleptic terms, distributors rarely had to modify their prices.

Table grapes
The range was led by Peruvian imports, most notably Crimson Seedless and Thompson Seedless. Shipments from Namibia and South Africa did not rise above supplementary status.

Oranges
Spanish Navelina were dominant when it came to blond oranges. Overall, the low temperatures increased the turnover rate, but after the holidays, there was somewhat of a customer saturation.

Lemons
On the one hand, there was an excessively abundant assortment available at times, so that distributors had to lower their prices from time to time. On the other hand, supply and demand were quite in line, so that prices remained at their previous levels.

Bananas
Demand was sufficiently met, as ripeners had confidently adjusted their supply to the rather still quiet demand.

Cauliflower
French batches dominated the scene, more so than Italian ones. The demand had narrowed down quite a bit. It could be satisfied without any problems. However, stocks could not be prevented here and there.

Lettuce
Lettuce flowed in from Belgium, Italy, France and the Netherlands. Traders were often able to increase their prices, as they did not always have sufficient goods to meet the demand.

Cucumbers
Spanish snake cucumbers dominated the scene. Supply was sometimes too low for the demand.

Tomatoes
A wide range of produce was available, with Turkey, Morocco and Spain setting the tone. Dutch, Belgian and Italian offerings followed in terms of importance.