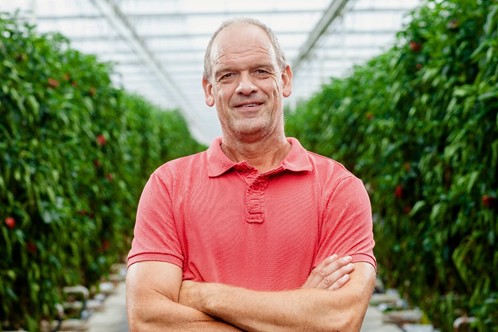 Tunisia and pointed peppers
At Kwekerij de Wieringermeer, John's responsibilities included purchasing and energy. In addition to this, John has always fulfilled an important commercial role within the Harvest House cooperative in the role between growers and sellers. John will continue to perform the functions he has within Harvest House in 2022.

After retiring from Kwekerij de Wieringermeer, John will remain responsible for the cultivation company Rainbow Horticulture Tunisia, where peppers are grown on 10 hectares in Tunisia. He also remains a member of the board and shareholder of Rainbow Puntpaprika, which includes the cultivation companies Kwekerij het Westland and Kwekerij Powergrow and grows sweet peppers on 18 hectares.

John's positions at Kwekerij de Wieringermeer will be taken over by the current management team: Patrick Grootscholten, Daaf Steentjes, Peter Steentjes and Arco Vreugdenhil. In a press release, the management states that they 'greatly appreciate what John has achieved with and on behalf of Kwekerij de Wieringermeer'. They, therefore, thank John for his efforts and the results achieved and wish him every success in his future career.