At Christmas, people generally go for more exclusive goods: The herb market normally also benefits from this. We spoke with Ahmed Bouklata, the specialized herbalist of the Cologne wholesale market, about the current market situation.

The renewed lockdowns and the 2G regulation are obviously making themselves felt in the catering industry, says Bouklata. Nonetheless, the good-humored retailer expects the usual seasonal increase in demand in the week leading up to Christmas, especially for cut herbs. "We source our cut herbs from a total of four countries - Spain, Italy, Morocco and Ethiopia. Goods from the latter are coming to us by air, which is why it trades at 2 euros/kg more." 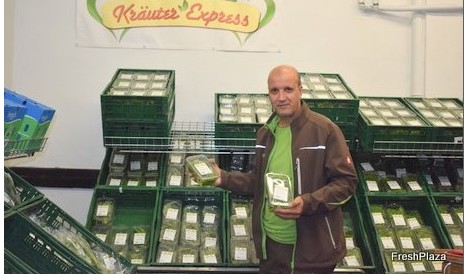 Ahmed Bouklata at the wholesale market stand in Cologne. Imported goods are currently dominating the scene. From March, the first domestic cut herbs hit the market.

Pleasing Christmas business
Despite Corona, Bouklata is pleased with Christmas sales so far. "As in other years, five to six varieties of cut herbs are in greater demand in December. These are not only the usual commercial varieties - such as chives, thyme and rosemary - but also marjoram and mugwort. Parsley from Italy is seeing a good demand as well. For these herbs, demand is now 15-20% above the sales level of the previous month."

Potted herbs in winter low
While cut herbs are continuously well received around the cold season, the potted herb market is obviously in the winter low. It is estimated that sales are 80% below the level of the summer. Bouklata: "The marketing of potted herbs is still very much concentrated on the summer. German goods are offered, but in much smaller quantities than in summer. For certain varieties - basil, for example - the quality suffers from the cold temperatures because there are too few hours of sunshine and the goods have to be sold within a day.."

Bouklata is skeptical about the near future because of the ongoing Corona issue. "Especially in the restaurant business, I think the situation will remain rather difficult in the first months of the new year. Fortunately, we can still serve our regular customers and we are coping well with that so far," he concludes.