"New varieties and segments are emerging in the Polish market"

"In Poland, there is a long-standing tradition when it comes to the cultivation of tomatoes which, up until the early 1900s, were mainly used as ornaments. Nowadays, 90% of tomatoes are produced in greenhouses and only 10% grow in open fields." These numbers were shared by Eytan Kachel during the "IV Simposio internazionale sul Pomodoro" (IV International Tomato Symposium) held in Comiso (RG, Sicily). The event held a lot of interest for the entire Italian and international tomato chain and, once again, focused on table tomatoes.

Eytan Kachel, streaming from Israel, went through the history of bunch tomatoes and reminisced the key points of the 1st symposium of 2015. "Greenhouses are high-tech, mainly made of iron/glass, and heated for the most part with methane, though some of the energy still derives from fossil fuel. Around 60 kg/m2 of tomatoes are produced thanks to very precise climate management, artificial lighting, and nutrition - everything is soilless and grafted. Crop protection products are used less and less with a push towards integrated cultivation techniques. Polish tomatoes are grown in open fields with average yields of 22 ton/ha, but also in cold polytunnels obtaining 15 kg/m2."

He explained how the Polish production has focused on pink tomato varieties that better met the local consumer trends such as Tomimaru Muchoo F1, which is currently one of the most popular. "Over the past three years, however, new varieties and segments are emerging. A lot of attention is dedicated to packaging, which can be diversified for different age groups with captivating labels for children and snack products."

The Symposium totem at the center of Piazza delle Erbe, Comiso (RG)

Biostimulants
The event was organized by the Agrisicilia magazine. It started on October 30th with a session dedicated to biostimulants during which Gianluca Caruso, Horticulture professor at the Federico II University in Naples, discussed a variety of plum tomatoes. This research was commissioned and sponsored by the magazine via its ISVAM Research Center and focused on the varieties mostly commercialized on the Sicilian territory. 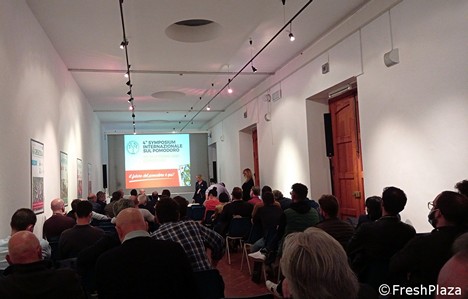 The audience who attended the event. (Click here for the photo gallery)

The afternoon session started with a greeting by Eytan Kachel, sharing the information on the market developments. 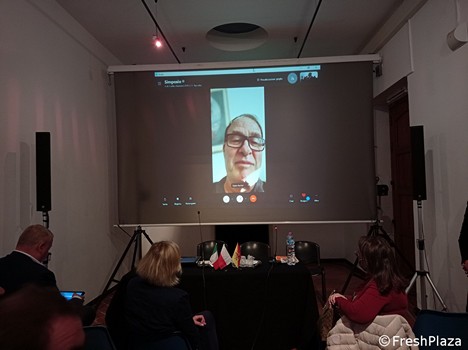 Eytan Kachel during the videocall

There is always something to learn from the Israeli, starting with the management of desertification which is looming in many European areas, especially in Sicily. This is why a 'Permanent work table on Sicilian/Israeli agriculture' is about to be set up.

Agnieszka Sekara, from the University of Agriculture in Kracow, Faculty of Biotechnology and Horticulture, discussed 'Tomato crop management in Poland'. 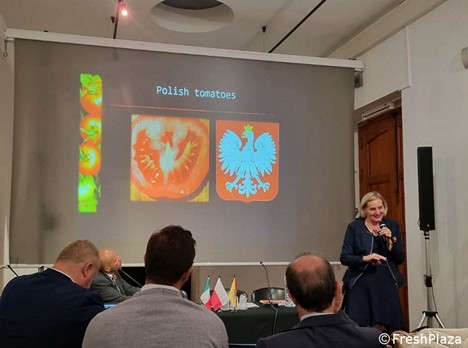