Smartcontainer's Rotterdam-Moscow shuttle took its maiden voyage on Sunday, October 31, making it the first time since 2005 that there is a direct rail connection between the Dutch city and the Russian capital. For now, the train will make weekly round trips.

"Trade between the Netherlands and Russia has been on the rise again since 2020," says Frank Donkers, a Smartcontainer director in an article on the Port of Rotterdam website. "So, there's a definite need for reliable, sustainable, cost-effective container transport. Our shuttle service provides that." 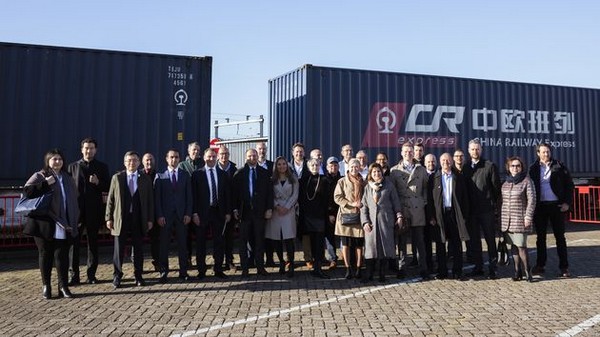 Embassy representatives from Russia, Belarus, Kazakhstan, and Armenia were among the guests at the launch. "It's great to experience the launch of this train between Rotterdam RSC and Moscow," says Gilbert Bal, the Rotterdam Port Authority's Supply Chain & Logistics senior business manager. "It not only connects Rotterdam with Russia but also with Belarus and Kazakhstan. Rotterdam will act as a hub for cargo to and from the rest of Europe too."

This Rotterdam-Moscow shuttle departs from Rail Service Center Rotterdam on Thursdays at 10:00. Seven days later, it will have reached its destination - the Selyatino and Vorsino railway terminals near Moscow. Along the way, it makes a stop in Brest, Belarus.

"From [Moscow], there are connecting links to places like Novorossiysk, St. Petersburg, Vostochny, Yekaterinburg, Novosibirsk, and China via border crossings at Zabaikalsk, Erlian, and Naushki," reads the article.

Eurasian countries
Smartcontainer is part of RUSCON, the Russian multimodal integrator, which in turn belongs to the Delo Group. That helped in establishing good contacts and partnerships with the Russian government organizations, including the customs authority and agricultural ministry. "Our existing network directly connects us to other Eurasian countries."

"Those include Belarus, Armenia, Kazakhstan, and Azerbaijan. That not only lets us guarantee a safe, sustainable connection, it also gives our customers the necessary flexibility. The train could, for example, stop in Germany and Poland. Our end goal is to have three weekly container trains running by 2022," concludes Donkers.