China: Vegetable "oasis" in the desert

In the Badain Jaran Desert, North China, where the Jiuquan Satellite Launch Center is located, the staff ate the tomatoes just harvested from the vegetable factory in the base. The vegetable factory here requires no soil, no pesticides, and diverse varieties. It only takes 35 days from sowing to harvesting.

The Badain Jaran Desert is one of the eight largest deserts in China. It is dry and rainless, windy and sandy, the lowest temperature in winter is lower than minus 30 degrees, and the highest temperature in summer exceeds 40 degrees. In such deserted deserts, it was impossible to think of not only growing vegetables but also ensuring rich varieties in the past.

IB-CAS
In 2015, the Institute of Botany, Chinese Academy of Sciences (hereinafter referred to as IB-CAS) and San'an Group jointly established Fujian San’an Bio Co. In 2019, with the support of the "Hongguang Special Project", a special project of the Chinese Academy of Sciences to promote the transfer and transformation of scientific and technological achievements, it quickly promoted the deployment of plant factories in China and abroad.

In December 2020, they ushered in an important task: to complete the construction of the vegetable factory at the Jiuquan Satellite Launch Center within 4 months to ensure the astronauts’ food during their stay at the base.

In the view of Li Yang, director of the Plant Factory R&D Center of IB-CAS, in the future, astronauts’ work in space may become normal, and logistical support must be done at all times to provide green, healthy, nutritious, and fresh vegetables.

Although the team has accumulated many years of construction experience and completed a number of plant factory projects in extreme environments, it is not a small challenge to build a "Vegetable Kingdom" on the ground in the Badain Jaran Desert in a short time. 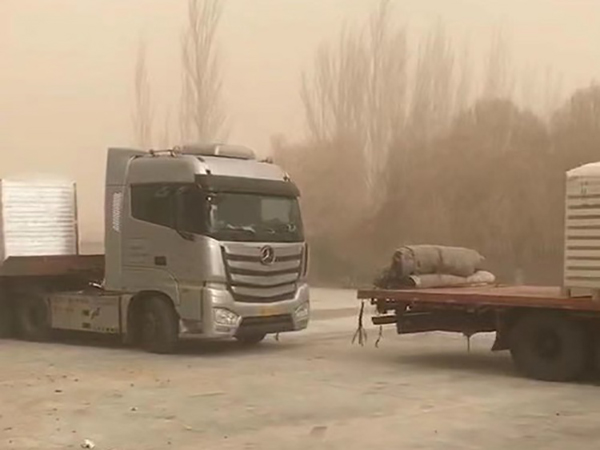 During the construction of the vegetable factory, the wind and sand were all around. Photo from San’an Bio.

Not only that, the astronauts are different from other "customers" in that the vegetables the factory supply include not only traditional leafy vegetables, but also tomatoes, cucumbers, bell peppers, and even some medicinal herbs.

In this desert "oasis", lettuce, common iceplants, tomatoes, bell peppers, etc. are all available, and the cultivation areas, power auxiliary areas, and process auxiliary areas are reasonably located. "According to the food needs of astronauts, specially customized varieties and precise control technology are the keys that need more attention in the future." Li Yang said.

In addition, he also said that in order to truly realize the cultivation of vegetables in space, for spacecraft with microgravity and compact space, water and nutrition management and other planting equipment and technologies are technical problems that need to be solved at present.

Eat well, eat safely, eat scientifically
Li Yang told reporters that because the plant factory is not affected by the natural environment, it can produce continuously on an annual basis, with a high degree of automation, and the output per unit area can reach dozens or even hundreds of times that of traditional field agricultural production. It is an important way to realize agricultural industrialization and modernization.

Take the production of lettuce as an example, the annual output of a 1,000 square meter field is about 3 tons, the greenhouse production of the same area is about 15 tons, and the plant factory can produce up to 100 tons.

"Plant factories can also be built on marginal lands or even deserts, which can effectively alleviate the contradiction between population growth and labor shortages and insufficient arable land. It is one of the future directions of agricultural development, especially for countries with a shortage of arable land, which is even more important." Li Yang said.

In addition to guaranteeing the overall food security of the country, plant factories can also guarantee the supply of vegetables for operations in special environments such as aerospace, and polar regions, which is of great significance to meet special needs.

Li Yang said that at present, at an altitude of 4,300 to 5,200 meters in China, self-energy-supplied containerized plant factories have begun to be used to ensure vegetable production. In addition,  ocean-going special plant factories have also begun to "commission", "this not only allows everyone to eat fresh vegetables but also a way to relieve stress and protect physical and mental health."

Not only that, but plant factories can also accelerate breeding and help the development of the seed industry. "At present, the work of crop breeding is completed in Hainan, but it can only be used for summer crops, and it can achieve up to 3 generations a year. Plant factories can accelerate the breeding cycle for summer and winter crops, achieving 4 to 8 consecutive generations a year. The planting and seed harvesting has become a breeding accelerator." Li Yang said.

Towards unmanned production
In recent years, many countries have set off a "plant factory fever". Although China's plant factories started later than Europe, the United States, and Japan, their development momentum is strong and competition is fierce. 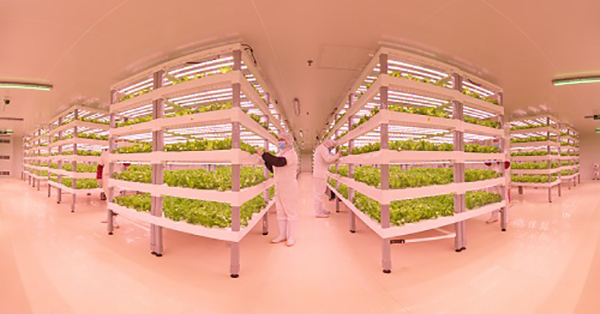 In addition, they also carried out plant factory science education, so that the "seeds" of scientific enlightenment were “sown” in the hearts of young people.

Li Yang told that although the company is currently suffering from the impact of the epidemic, the company's plant factory business is showing a growth trend and exports to 29 countries and regions, and there is also a market phenomenon of vegetables in short supply.

He said that, on the one hand, with the increase in labor costs, people are paying more and more attention to intelligent, automated and unmanned plant factories; on the other hand, due to the flexibility of containerized plant factories, its demand and application areas are also increasing. "In contrast, foreign demand is greater."

For plant factories, labor and electricity are the main costs. Improving the level of mechanization and intelligence is an important direction for development.

Li Yang told that at present, the first-generation UPLift automated plant factory of San’an Bio has been promoted in Hainan and Yangling High-tech Demonstration Zone in Shaanxi Province, and has realized the entire unmanned production before harvesting, and is "leading in the field of international plant factories."

Facing the future global market, Li Yang said that next, in terms of equipment technology research and development, it will focus on intelligent plant factories to improve production efficiency and reduce labor and operating costs. "In addition, we will also concentrate our superior R&D efforts to realize unmanned production in plant factories in a real sense."