Developer of special harvesting knife for cucumbers in the spotlight

Tom Houben from Sevenum was recently named 'Starter of the third quarter' by the Dutch municipality of Horst aan de Maas. In addition to his work at Christaens Group, Tom started his own company on July 1. With that company, Top-3d, he developed an ergonomic harvesting knife for cucumbers that should also prevent the spread of viruses. 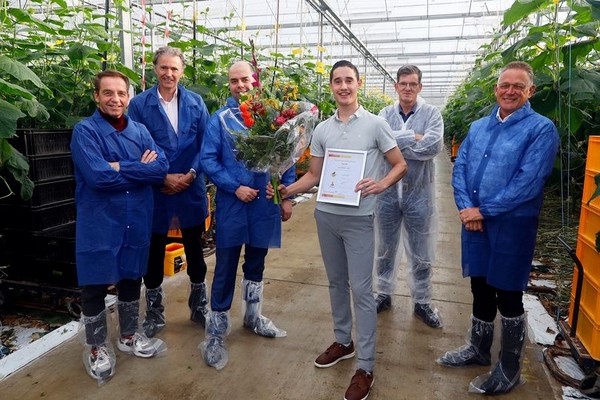 The knife has a reservoir with disinfectant, and through gravity, the disinfectant gets on the blade and disinfects the knife. Sales of the first knives have already started.

These knives are not the only product, though. With Top-3d, Tom is committed to reducing the impact of viruses in horticulture and has already worked on the design of similar scissors for tomatoes in consultation with several tomato growers.

Now and in the future
To acquire new customers, Tom is working together with crop consultant Herman Hermans, and he can also resort to the contacts of his parents, who have a greenhouse company.

Meanwhile, Tom has also submitted a Dutch patent application for his products. He hopes to be completely independent in five years.