Value of Texas pumpkin production surpassed all other states at $25.9 million in 2020

Pumpkin production is widely dispersed throughout the United States with crop conditions varying greatly by region. In 2017, about 40% of pumpkin acres were harvested in the top six pumpkin-producing states, measured by pumpkin weight (2017 U.S. Census of Agriculture, USDA, National Agricultural Statistics Service [NASS]). 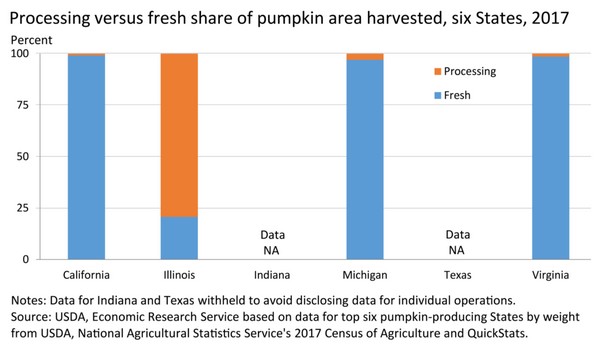 In 2020, Illinois increased its acreage and leading position, harvesting more than twice as many pumpkin acres as any of the other top States, at 15,900 acres. In the same year, California, Indiana, Michigan, Texas, and Virginia each harvested between 3,700 and 6,000 acres (all pumpkin data for Texas in 2019 is unavailable from NASS to avoid disclosing data for individual operations. Data from other years show that Texas is an important pumpkin-producing State).

Illinois harvests the largest share of pumpkin acreage among all States and an even larger share of processing acres. The most recent available data indicates that almost 80% of pumpkin acres in Illinois are devoted to varieties destined for pie filling or other processing uses, compared with about 3% in Michigan and even less in California and Virginia. This difference in the type of pumpkin most commonly grown in Illinois helps explain differences in yield and price between Illinois and other top States. 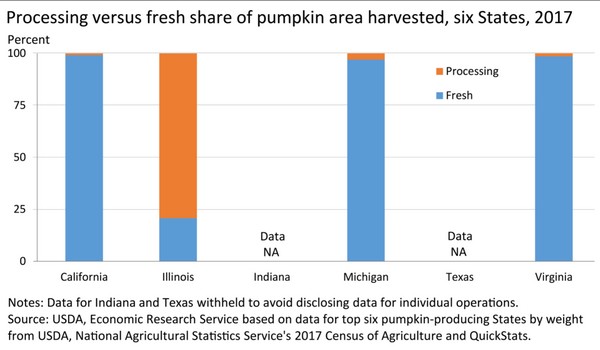 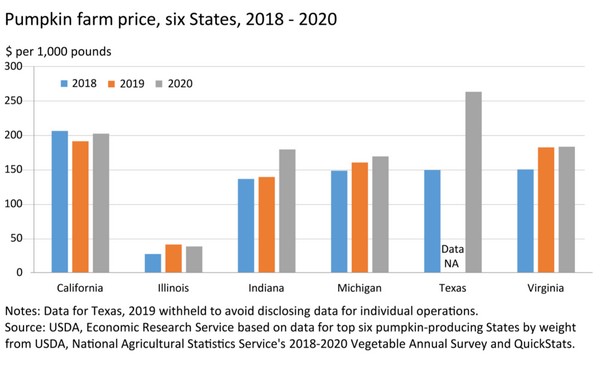 All States see year-to-year changes in the price of pumpkin received by growers. Until 2020 (when Texas received $263 per 1,000 pounds), California received the highest price for its pumpkins. averaging about $200. Dry weather in Texas that led to higher quality and lower yield, coupled with strong wholesale demand, contributed to the high prices. Other States (like Indiana, Michigan, and Virginia) received prices ranging from about $136 per 1,000 pounds to $183. Illinois growers sell their pumpkins mainly for processing, and those types of pumpkins are priced lower than jack-o’-lantern pumpkins. This means that Illinois producers consistently received the lowest price, ranging from about $30 to $40 per 1,000 pounds on average.

Pumpkin supplies from most States are targeted toward the seasonal fresh market for ornamental uses and home processing. Pie varieties are predominantly sold in the processing market, although some are sold to consumers in retail outlets.

Growers mainly produce jack-o'-lantern type pumpkins (Howden), but demand for specialty pumpkins like White Howden, Blue, Cinderella, and Fairytale continues to expand as consumers look for new and interesting varieties. Opening the season, wholesale prices range from $130 per 24-inch bin for pie pumpkins, to $150 for Howden pumpkins, and up to $300 for specialty varieties like White Howden pumpkins. At $5.17 per jack-o’-lantern type pumpkin (Howden) in the second week of September 2021, retail prices are up 7% from the same time last year.