At the end of this season, Kees and Geert-Jan van Tuijl's farm in Zaltbommel will exchange peppers for strawberries, meaning the company will be a specialized soft fruit company in a few weeks' time.

This is what the growers told Glastuinbouw Nederland in a story as part of the 'Pass on the color' campaign that was launched at the beginning of April and ties in with the United Nations International Year of Fruit and Vegetables. The aim is to raise awareness of the important role of fruit and vegetables in a sustainable and healthy society. 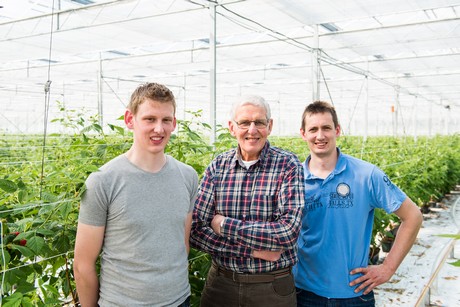 Geert-Jan and brother Kees with their father in the raspberry greenhouse. Archive photo GroentenNieuws.

Geert-Jan van Tuijl explains why they chose to do so: "It is not possible to achieve a good return on peppers in the current greenhouse situation. The high energy prices have accelerated this decision because the return in the longer term is under pressure. Raspberries and strawberries go well together, but of course, you will not know until afterward whether it was the right decision or not."

For 32 years, peppers were grown on the farm on the outskirts of Zaltbommel, but their origins lie with strawberries. Until 1988, Van Tuijl senior - who handed over the company five years ago - was already growing strawberries under flat glass, alternating with tomatoes and peppers.

In that period, the cultivation of strawberries gradually disappeared from that area, where the auction is situated too. "Strawberries and other soft fruits are grown increasingly often in modern greenhouses. I think that the strawberry acreage in Bommelerwaard is larger now than it was in the heyday of the last century, not to mention the higher production per hectare."

Energy needs
The company has an area of 6 hectares, of which 3.4 hectares are raspberries. The remainder will be prepared for strawberries next winter. After the crop rotation, the strawberries go to Zaltbommel and the raspberries go to the auctions in both Zaltbommel and in Hoogstraten. "Strawberries are a stable product that fit in well with raspberries in terms of work and planning. Moreover, the energy requirements are important. Depending on the variety and planting schedule, raspberry can be grown with 12 m3 per meter, strawberry with 18 m3, and peppers with 35 m3," Geert-Jan calculates.

Quality
When choosing raspberries a few years ago, market opportunities obviously played an important role as well. "For years, raspberries were mainly sold to the vegetable specialty shops and the catering industry, but nowadays the supermarket is an important sales channel."

Van Tuijl sees a clear difference between the different sales channels. "We have three crops in a row. At the beginning of the crop, the fruit is coarse and the quality is best. This is mainly product for the wholesale trade. The last part of the cultivation produces a different quality, and those raspberries go to the retail sector for an acceptable price. A nice mix of customers, that's what we strive for. That way, you achieve the highest return."

Sustainability
Despite the fast-growing popularity of soft fruit, especially among younger consumers, Geert-Jan guards (as he did in 2019 in a story about the growth of alternative soft fruit, because challenges are and were plenty) against a too positive story. "Supermarkets still buy mainly based on price, meaning we have to deal with competition from Southern Europe. Those countries are also increasingly more able to deliver good taste and quality. With blackberries and strawberries, the difference in quality between Dutch and imported products is greater than with raspberries, you have to be honest about that. The import determines to a large extent the market price for raspberries. Of course we, as Dutch soft fruit growers, can commit to sustainability, but the reality is that, while there is a lot of talk about it, it is still not paying off in the market."

Read the whole story (in Dutch) here at Glastuinbouw Nederland, where Eminent and Vreugdenhil Vegetables were previously featured as part of the 'Pass on the color' campaign that runs from World Health Day on 7 April to World Food Day on 16 October.