Wim Peters Kwekerijen leaves ZON and starts its own sales

As of 1 January 2022, Wim Peters Kwekerijen in Someren will take over the sale of tomatoes. "This is a logical step in the development of the company that wants to grasp more opportunities and produce in a customer-oriented way," says the grower. The sales are in the hands of Maurice Langeslag. Lisa Peters will support him in the field of marketing. 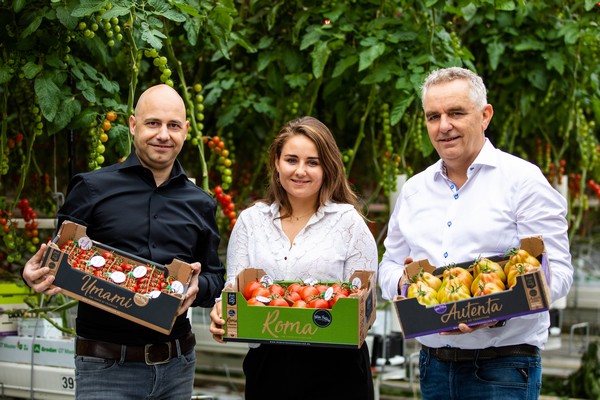 Maurice Langeslag has been appointed Commercial Manager at Wim Peters Kwekerijen as of September 2021. Under his leadership, the company will organize its own sales. Langeslag has a long track record. For example, he was Account Manager for tomatoes at ZON Fruit & Vegetables from 2011 to 2016. After that, he worked as Sales Manager for STC International.

A new step
Employing his own salesman brings an end to the long-standing cooperation with auction ZON, of which Peters was a member from his start in Someren. "We are ready for the next phase," says Wim Peters. "With this step, we want to be independent, seize more opportunities and produce in an even more customer-oriented way. By focusing more on product and organization, we want to generate a shorter chain and more clout."

Sales strategy
The decision was preceded by a long road. On 23 June 2016, the company was hit so hard by a hailstorm that new construction was necessary. That was a good time to formulate new strategic goals and develop a new organizational structure. As a result, Peters returned in 2017 with new stands and greenhouse design entirely focused on sustainable and innovative cultivation methods, including LED lighting. In that year, he also changed his sales strategy, opting for a broader range of tomatoes and establishing contacts with foreign growers and their trading partners, among other things.

In 2020, Wim Peters Kwekerijen doubled its acreage from 16 to 31 hectares by taking over Greenco Productions and De Driemaster nursery in Someren.

Demand-driven
"We now work in an almost demand-driven way. Moreover, we work on long-term and honest relationships with our (inter)national customers, in which the quality of our products is central. We want to focus even more on the latter. The step to take control of our own sales is something we have grown accustomed to and therefore feels very logical. Our organization is also ready for this step."

The Taste of Tradition
Wim Peters Kwekerijen has a long family tradition. Wim is the third generation of the Peters family to grow tomatoes. The fourth generation, including daughter Lisa, is now making its appearance. Under the motto 'The Taste of Tradition', the company has its own brands, such as the Cherry Vine tomato 'Umami', the Coeur de Boeuf tomato 'Autenta', and Plum tomatoes 'Roma'.