Is there magic in magenta?

It’s the color that first captures the eye: an unexpected blast of shocking pink against the usual green and brown fields and white net houses dotting the research farm of the World Vegetable Center (WorldVeg) in Shanhua, southern Taiwan.

Globally, tomato is the second most-consumed vegetable (following potato), and farmers are always seeking better methods to produce this valuable crop by manipulating the water, nutrients, and light it receives. Growing tomato in net houses allows growers to protect plants from pests and to change the type and amount of light reaching the plant. Plant pigments and photoreceptors respond to blue and red light in particular, and the researchers sought to combine the physical protection of a net house with a change of color in the light spectrum to see if it would improve the quality and yield of tomatoes. 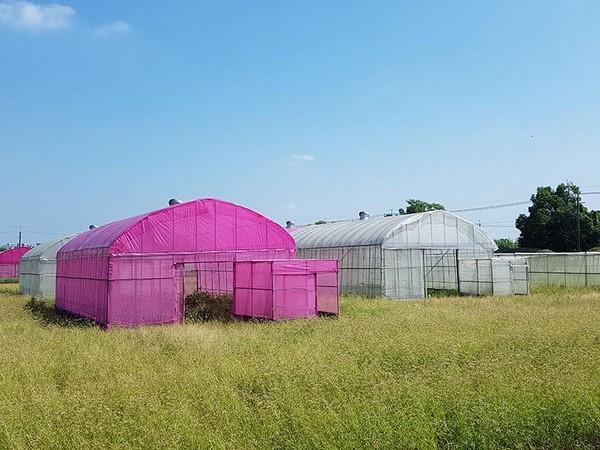 Response to the spectrum
The tomato plants produced in the magenta net house grew significantly taller than those in the white net house and the open field—by 7% and 33%, respectively. The pink-house plants had less damage by leaf miners compared to open field production.

The fruit produced by these plants also had higher lycopene content. Lycopene, a bright red carotenoid found in tomatoes and other red fruits and vegetables, is a powerful antioxidant with many health benefits.

But all wasn’t rosy with the taller tomatoes. Whitefly, a major vector for tomato viruses, proliferated in the magenta net house, and the plants grown in the net houses (both magenta and white) had lower levels of chlorophyll, a general measure of plant health. More damage from spider mites was observed on plants in both net houses than on plants produced in the open field. No differences were observed for yield, Vitamin C, and β-carotene among the three treatments.

The magenta net house had higher temperatures and lower humidity compared to the white net house and the open field—conditions that favor whitefly and spider mite.

To use the “magenta method” to produce high-lycopene tomato, the researchers agreed that it would be necessary to better manage the heat and humidity that builds up inside the colored net house, as well as use integrated pest management practices to keep pest numbers inside the net house low.