Fife Fruits has been growing soft fruit in Fife, Scotland since 2006. The company grows fruit in 32 hectares of tunnels at different locations between Cupar and St Andrews. The crop consists mainly of strawberries, with smaller volumes of raspberries, blueberries and blackberries.

Robert Simpson has been growing fruit for 20 years and doesn’t remember ever having a season like this one. “We have had to contend with Brexit, Covid and very unusual weather patterns,” said Robert. “We had a mild winter which led to our earliest picking ever on the early varieties. This was followed by a cold spring which delayed the main crop by two weeks, June and July were very warm months which brought on a lot fruit all at the same time. It was the same throughout the country which led to a lot fruit being on the market at the same time.” 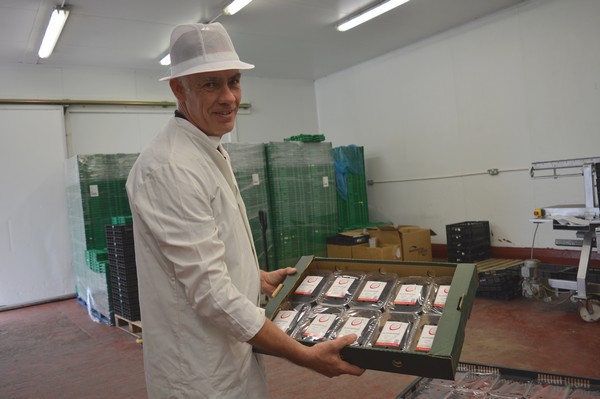 Robert with fruit packed for the local market

Robert explains that having a lot of fruit at one time does not work well in the market or for getting the crop harvested.

“Supermarkets work on a lead time which made sales difficult and at the same time we didn’t have enough workers to cope with the big volumes. Fortunately, we did find a market for most of the crop but some did go unsold and we struggled through the peak period.”

Normally the Scottish and English seasons compliment each other to a certain extent but this year they clashed which meant even bigger volumes were available at the same time.

“We have the benefit of working in a cooperative of growers. Asplins Producer Organisation gives us the opportunity to work with other growers throughout the UK to and use the variations in the season to fill the gaps and distribute the fruit to where it is needed.”

Last year during the lock down the company started selling fruit at the farm gate for the first time and as it proved very popular last year, they have done it again this year where they have seen increased demand but it is a very small part of the business. 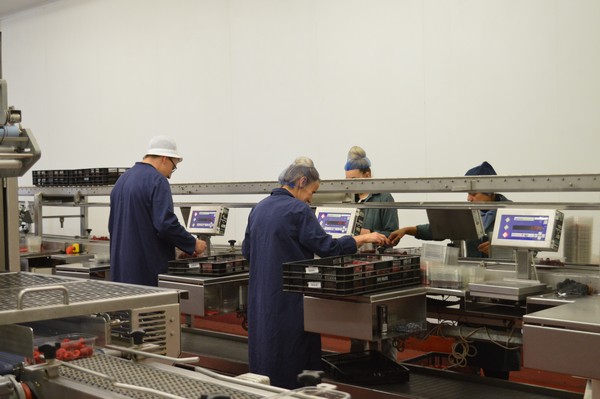 The packhouse, a bit quieter now but at peak season there 15 people working there

Labour
As is the case throughout the UK labour has been in short supply, “We have not had enough labour at any point this season,” said Robert. “It wasn’t a standard year for production which made it tough but also back in April when we needed labour there were very few flights into the UK making transport difficult, there was also much more administration due to Covid tests and passenger location papers. The issuing of the temporary seasonal workers visa came very late for growers and was problematic.

“We just about managed to scrape through the season where labour is concerned, but my worry is that the Government will say that growers did manage this year and nothing more will be done, but the fact is that we struggled and fruit was left unpicked and the many other husbandry jobs have been left undone.”

Robert is very open to employing local people, but feels more education is needed to show people how work is done on a fruit farm.

“It is a great industry to be part of, it is not just a case of picking fruit in the summer. The industry is very developed and scientific in the way we grow in the tunnels with the irrigation systems and biological control using natural predators etc.” 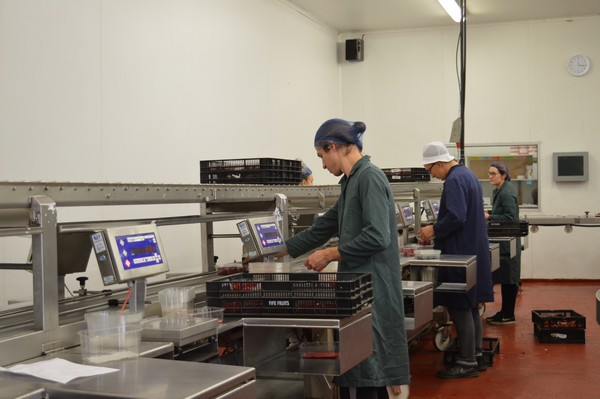 “The Sonata has found a niche in Scotland; it is a very dependable variety and works well here. We are always looking for new varieties of both strawberries and raspberries and work with East Malling Research and The James Hutton Institute.”

Transport
Fife fruits has not been directly affected by the transport shortage, they use a combination of local and national hauliers and have received a 100% service from them, but Robert has seen how much pressure these companies are under. “There is now a lot more forward planning involved and no option for extra last-minute orders.

This forward planning is also needed when ordering raw materials. “We are already planning deliveries for coir for March next year due the shortage of available containers, shipping costs are also going up by around 300%. This is the same for cardboard, plastic punnets have increased in price by 7 - 10% in the current season. These additional costs are not reflected in the price that we get for our fruit and will make things very difficult in coming seasons.”