Polybee: There’s a new drone in greenhouses, and it isn’t a bumblebee

“Pollination can help you define your yield potential but whether or not you achieve this depends on how well the farm is being managed and if you can close the feedback loop on each plant,” says Siddharth Jadhav, founder, and CEO of Polybee. Polybee is a spin-off from the National University of Singapore that specializes in microdrones for pollination in controlled environment agriculture.

After identifying the need for improved pollination in indoor farms and greenhouses, Siddharth raised pre-seed funding from the university, received additional backing from the Temasek Foundation, the philanthropy arm of Temasek Holdings, then used his experience in experimental and computational aerodynamics of microdrones to develop autonomous pollination drones. 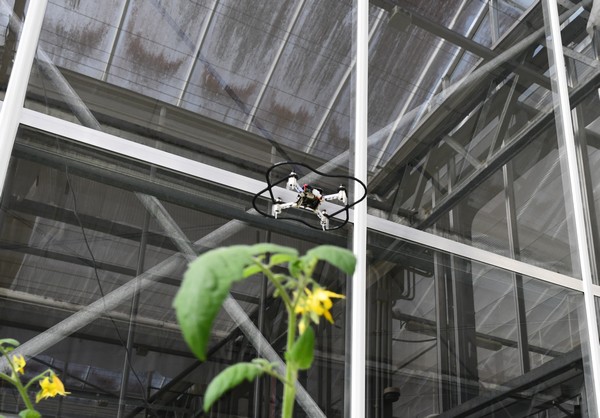 Aerodynamically controlled pollination
Polybee has developed a method of pollination that works for strawberries, peppers, tomatoes, and eggplants in both indoor farms and greenhouses. These crops self-pollinate and typically use bumblebees to dislodge pollen from anthers and onto the stigma. Whereas bumblebees pollinate by landing on the flower (evidenced by little “bruises” on the flowers), Polybee uses aerodynamically controlled pollination to dislodge the pollen.

“The idea is to transfer enough energy to the flower to dislodge the pollen grains from the anthers so that they fall onto the stigmas. Bees do it through vibration and contact, but we can do it by exploiting turbulent airflow,” says Siddharth.

The Polybee team studied the fluid-structure interaction between the turbulent air and the flower and found that certain inputs in airflow are critical to pollen release. These, according to Siddharth, including turbulence, kinetic energy, airspeed, etc. Knowing this, Polybee worked backward to ensure that the drones created air conditions that triggered pollen release without ever touching the flower.

The company promotes this autonomous pollination technology both for commercial growers as well as for seed breeders, with the latter benefiting from precision pollination in pure line breeding. Cross-pollination in hybrid seed production is also on the company’s product roadmap, albeit at a later stage. 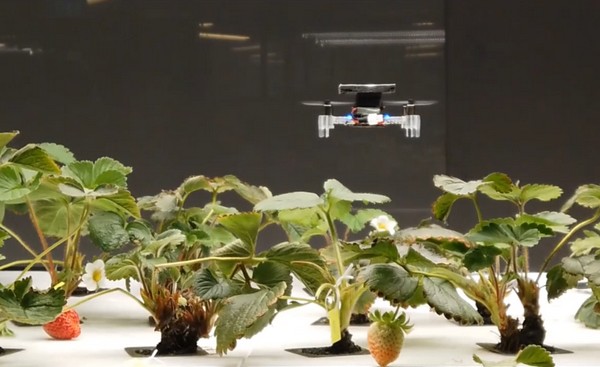 Applications for crop registration
Aside from providing autonomous and consistent pollination, Polybee’s autonomous drones have applications for crop registration, which allows growers to track crop status and growth parameters. Assessing plant stress can be challenging, with common methods including measuring the leaf canopy temperature and the normalized difference vegetation index, or NDVI, through multispectral imaging. The latter measures plant status based on the crops’ reflection of certain light wavelengths. For example, high absorption of near-infrared light would indicate plant stress as healthy leaves strongly reflect NIR. While NDVI is used in field-based agriculture, its use in greenhouses and indoor farms has been limited by the physical infrastructure. However, Polybee is taking up the challenge and is exploring multispectral imaging to detect early chlorosis, symptoms of disease, etc.

One of Polybee’s pioneering innovations is accurate measurement of key plant features such as fruit dimensions and stem thickness using onboard 3D cameras. “There are so many layers to this technology. You can even develop algorithms to determine the weight of fruit. It’s as close as you get to yield estimation. This is something we’ll be continuing to develop as we have more deployments and more data,” explains Siddharth.

“We haven’t benchmarked with bumblebee pollination because we don’t really have bee pollination in Singapore, but that is in the pipeline for our upcoming deployments in the UK and Australia,” says Siddharth.

By anchoring Polybee’s profits to the grower’s yield improvements, Polybee ensures that all parties involved have aligned incentives. The first service offering focuses on pollination and growers can also opt into the crop registration and microclimate documentation.

According to the company’s website, Polybee is currently calling for pilot projects globally for the pollination of strawberries, tomatoes, peppers, and eggplants in both greenhouses and vertical farms.