Putting Eupeodes-System to the test

Commercial trials of Eupeodes-System in Southern Spain have demonstrated the hoverfly’s potential to establish and contribute to aphid control in a range of high value crops.  Depending on the type of aphid in the crop, Eupeodes corollae can be combined with different parasitoids or predators to produce a multi-pronged effective control strategy.

Bell peppers
In bell peppers, Eupeodes-System is performing well in an ongoing trial in a 1.4ha crop at Acien y Barranco, at Las Norias de Daza, in Almería.

“We introduced the pupae in two consecutive weeks starting at the end of April,” explains Biobest adviser, Rocio López.  “We installed banker plants - with Rophalosiphum to aid establishment – while also releasing Aphidius-System. As the aphids were a Macrosiphum species, the growers also targeted pest hot spots with lacewing larvae - Chrysopa-System and the parasitic wasp Ervi-System.

“This strategy is working really well – the pest is effectively controlled and Eupeodes can be seen flying around the crop.” 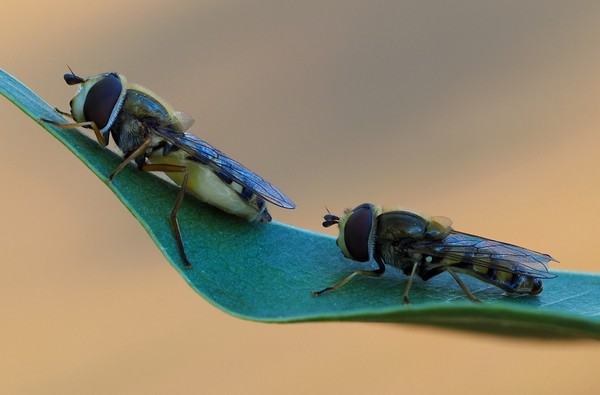 Strawberries
Earlier this year, Biobest adviser Miguel Claros set up a Eupeodes-System trial in a 0.1ha block of strawberries at Flor de Doñana Biorganic - at Almonte, in Huelva.

“The main aphid in this region is Chaetosiphon fragaefolii,” he explains.  “A species that is hard to parasitise, predators are the only viable solution.”

“Subsequently, we monitored weekly recording the number of adults of each hoverfly species,” Miguel explains. “The results showed that in the cooler weeks, only Eupeodes established well. By April, Sphaerophoria numbers were rising as temperatures were better suited to this species.

“Encouragingly, the aphids remained under control during this trial and there was no significant crop damage. The data showed Eupeodes-System is well adapted to the cooler temperatures while Sphaerophoria-System performs better in higher temperatures.

“Eupeodes-System may solve the lack of effective aphid controls in February and March, when other predators and parasites cannot yet be introduced.”

Zucchini
Turning to zucchini, a trial was carried out earlier this year in a 1.1ha crop grown by Biosierranevada, in the same region.  Two Eupeodes-System introductions were made in April – weeks 17 and 18.

“By week 22, Eupeodes was visible throughout the crop,” says Pedro. “However, the pest pressure had also risen fast, so the crop was treated with Pyrethrin; a week later there were still plenty of hoverfly visible.

“These results show Eupeodes had established well in the zucchini crop. The hoverfly appeared to complement the aphid parasitoids, Aphidius colemani and Aphidoletes aphidimiza, at work in the crop.  We expect this strategy to work better if Eupeodes-System is used preventatively.”

Cucumber and watermelon
Initial trials in a watermelon crop in Almeria and a cucumber crop in Granada, showed that with the help of banker plants as well as reservoir plants such as Lobularia - which provide shelter and/or an alternative food source - Eupeodes has the potential to establishing well and therefore potentially play a part in aphid control.  Further trials are now planned.

Summing up, Rocio says; “these initial commercial trials have clearly shown Eupeodes-System has the potential to establish well in a range of horticultural crops.

“With a short lifecycle, aphids can reproduce very quickly, particularly when temperatures rise – making the early establishment of predators key.  By deploying banker plants and reservoir plants there is the potential to generate a standing army of Eupeodes-System ready to play its role in controlling this ubiquitous pest.”