Nanobubbles are tiny bubbles, invisible to the naked eye and remaining suspended in irrigation water for long periods. According to Moleaer, the benefit is a highly efficient oxygen transfer and supersaturation of dissolved oxygen in irrigation water. This results in more efficient water usage in plants, increasing nutrient uptake and root zone oxygenation, which leads to increased crop yields and improved size ranges and grades of fruit. 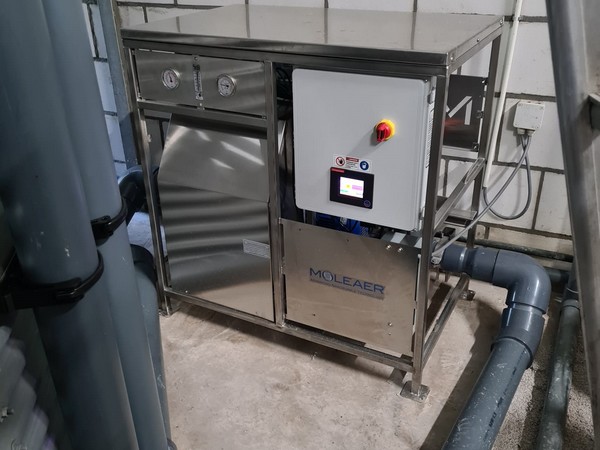 When Moleaer, following the successfully completed strawberry cultivation trials with Delphy in 2020, started looking for a commercial strawberry grower who wanted to take the step on enterprise level towards cultivation with more emphasis on oxygen in the rootzone, talks with Rob van Enckevort of De Peelkroon quickly took off. The introduction was made by Arlo Saes of Air Liquide. Rob Enckevort has been growing strawberries for many years, now in two locations in the province of Limburg in the Netherlands.

At the largest of those two locations, a Moleaer Neo Nanobubble Generator was placed in early 2020, which contributed to significant oversaturation in the oxygen levels in a supply tank. On average, the dissolved oxygen level in the water has been 25-30 mg/l during the entire season.

“I had been working on making my cultivation cleaner and more resilient for some time,” says Rob van Enckevort. That includes everything from fertilization schedules to water. Water quality is often still an unknown factor. With water quality, one often thinks of disinfection, to meet official standards. But plants don’t grow well in dead, disinfected water. “For me, Moleaer technology has been the missing link,” he shared. “From the start of the season, I’ve seen very healthy root development, and the plants were doing well. The plants have received more energy, because our yield has increased significantly, with larger fruits on the whole. I was able to compare, because in the other location all factors except for the nanobubbles were the same, and I simply harvested less there.”

“I found the conversations with Rob to be incredibly educational,” says Michiel de Jong with Moleaer. “He just knows an awful lot about cultivation and about strawberries. I believe we at Moleaer were able to contribute to his knowledge on how oxygen is dissolved and retained in the water. That’s because various physical and biological factors influence that, and not very many growers or crop advisors are familiar with this. In addition to very efficient oxygen transfer, nanobubbles also have physical/chemical qualities through which they can very positively contribute to higher crop yields and cleaner cultivation. For example, a nanobubble is smaller than a bacterium and as small as viruses. Add to that the fact that Moleaer technology produces more than a billion nanobubbles per milliliter of water and that these nanobubbles can disinfect, and you understand the processes.”

At De Peelkroon, a Moleaer Neo has been installed at the second location as well now. While Rob first started with oxygen tanks, he now decided to opt for the Moleaer Neo with integrated oxygen generators on both locations. The best choice for a grower depends mainly on the size of the greenhouse and the cultivation method. Moleaer will keep following and guiding Rob in any case, when it comes to measuring the water and oxygen.