Getting a 95 hectare greenhouse ready for summer

While we’re preparing for our summer break, the team with Spayka Greenhouses is prepared for summer as a whole. In not even 6 months from initial contact to full install, 95 of their 105-hectare acreage has been equipped with high-pressure fog systems. Together with the system also comes extensive crop support, enabling the Spayka team to keep growing during the hot and dry Armenian summer.

Hot and dry
“The relative humidity inside the greenhouse during the hottest summer day is 15%, and the temperature is 42 oC.” With those facts, the team with the Armenian greenhouse company Spayka reached out to Dutch technical supplier MJ-Tech earlier this year. Answering demand from the Caucasus countries, Russia, and Gulf and European countries, the company rapidly expanded its greenhouse acreage over the last couple of years. Divided over two locations (Artashat, near the foot of Mount Ararat and Noragavit, not far from the city of Yerevan), they’re growing tomatoes, cucumbers, and eggplants in 105 hectares - all Richel foil greenhouses. Recently, the company also started growing peppers in their first semi-closed greenhouse.

Despite their greenhouse-grown produce being in high demand over summer, the season comes with extreme challenges. “Temperatures frequently rise to over 30 degrees in summer, with peaks of 42 degrees Celsius,” says Jurnjan van den Bremer with MJ-Tech. “Combined with a relative humidity of only 15%, it’s hard to keep the plants flourishing.” 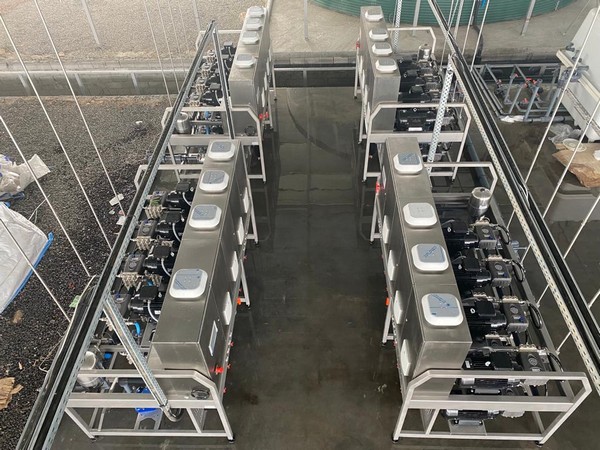 The Dutch supplier understood the urgency: after providing the technical team of Spayka with a complete quote for 50 ha of high-pressure fogging within 24 hours, Spayka decided to move quickly as well and asked for a proposal of another 45 hectares. “Only the new semi-closed greenhouse, which is used for pepper growing and is equipped with active cooling, is excluded from the project,” Jurnjan says. To make sure the Spayka team would make the most out of the installation, they also included 12 months of high-pressure fogging crop growth optimization, based upon data from sensors of Belgian company 2Grow and growth support of Cultivators. “We do not just want to sell systems, we want to make sure growers can quickly reap the benefits of the high-pressure fogging. This includes rapid delivery and installment and support to optimize the use of the system.”

The quick response from MJ-Tech, the potential of the system, and the company’s ability to quickly realize the project represented an offer Spayka couldn’t refuse. Only two months after the initial contact, the first installations were ready to leave MJ-Tech. The first truck left the company on April 9, and after 2 weeks of transport and custom clearances, installation started on April 26. With two MJ-Tech supervisors and over 20 local people of Spayka, the team managed to break the ground and installed the first blocks of 5ha in a couple of weeks, quickly followed with climate computer connections.

Ever since May 25th, Spayka is making use of the high-pressure fog systems and by now, the complete 95-hectare project can benefit from the system. “We wanted to make speed because the growers showed us the urge,” Jurnjan says. The hard work was rewarded: this year summer has been extremely harsh and without the fogging system, the data of the 2Grow sensors, and the support of the Cultivators team, production would have been significantly lower or even, in the case of the eggplant cultivation, had to be finished early.

“Normally temperatures rise to 30, 33 degrees in July, this year we’ve already seen 38 and even 40 degrees. Expectations are temperatures to only become more extreme. With the system, the greenhouse can be cooled easily and the relative humidity can be increased, resulting in a much more favorable growing climate,” Jurnjan says, adding that also outside of summer, the high-pressure fog system will prove to be an additional steering tool in the greenhouse climate.