The enormous amount of rain that has fallen in Western Europe in recent days has caused rivers to burst their banks and wash away buildings in Belgium and Germany, where at least 1,300 remained missing. Homes and streets in the Netherlands also flooded. The weather also had disastrous consequences for the fruit and vegetable sector. The damage to unprotected soft fruit, cherries and open-field vegetables in is enormous, local sources say. For German open field vegetable farms already battered by the Corona situation, it is becoming increasingly serious as arable land and grassland as well as fruit, vegetable and vineyards are flooded. In many cases, the vegetation was destroyed, otherwise affected by yield and quality losses.

Christian Frey of German company  Gemüsebau Frey said, "This weather is affecting pretty much everyone I've talked to. In the Palatinate, where the largest cultivation area for outdoor vegetables in Germany is located, it was not even possible to plant new sets. No matter if lettuce, spring onions, radishes, etc. Land auf and Land unter there are currently as good as no goods. Since the supply of goods is designed for regionality, there are also no more goods to compensate for the situation, both in terms of quality and quantities."

"We have a total failure at the moment," Sepp Egger, owner of Gemüsebau Egger in Bürgeln, told Germany television station TVO. The vegetable farmer points to the fields that were badly affected by last weekend's thunderstorms. The harvest-ready cauliflower was soiled by the heavy rain with churned up soil and can no longer be sold, the freshly planted chabis is "boozy" and no longer grows.

Egger's fields are still partly under water: "July and August are planting months. If we can't plant anything in our fields now, that's bad." Vegetable farmers would currently need dry and mild weather, but that is not in the cards. The fact that hardly any vegetables can be planted is a widespread problem, as Manuel Strupler, president of the Association of Vegetable Producers TG and SH, is forced to note.

Without improvement in the weather, the situation is getting worse
"Many farmers can't plant lettuces now, for example, and accordingly they won't be able to harvest them in a few weeks," says Strupler. He knows of farmers whose potato harvest will fail completely.

If the weather doesn't dry out soon, the situation could worsen. "We expect that there will be bottlenecks in vegetable deliveries," says Strupler.

Soft fruit and cherries
"If the fruit is not protected, growers can consider the entire harvest as virtually lost," says chairman Eric Huids of the Dutch Fruit Growers Organization in Limburg. And even if protection is in place, some of the fruit can be lost because the roots soak up so much water that the fruit snaps. He estimates that the majority of sweet cherries in Limburg, in the South of Netherlands, are covered, because they are a more expensive product. The same applies to most strawberries and redcurrants. But because covered soft fruits absorb too much water from the ground, some of the fruits can still develop cracks. Possibly some 10 percent of the total is lost as a result.

Also part of the container field of Dutch organic herb grower Puur Aroma in Margraten has been flooded. "The fire department pumped out a large part of the water for us Wednesday. The rest has naturally migrated away. Higher parts of the nursery were fortunately not flooded," says Frank Radder. "It's hard to imagine how much rain has fallen and how it looks now. Really an unprecedented situation. In Valkenburg the cars were driving through the streets." 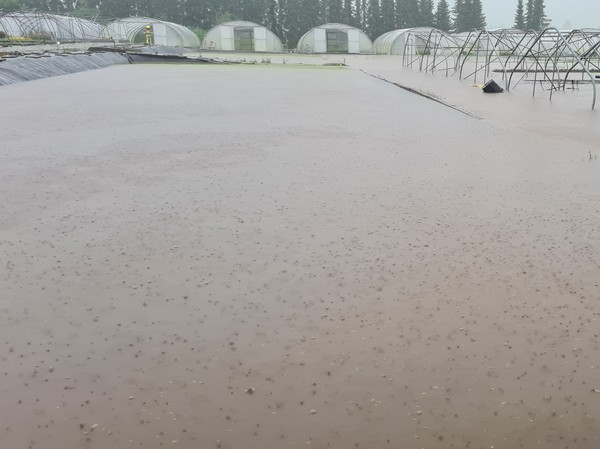 Belgium
According to local website Vilt, growers in the Belgian Voer-region around Maastricht have been particularly affected. There, the rivers have burst their banks and there is up to one meter of water on some plots. This is disastrous for crops. Many plots of strawberries and soft fruit did not survive.

The damage in Wallonia, the south of Belgium, is incalculable, says the Walloon Agricultural Association (FWA). Farms have been flooded and entire fields of crops have been washed away, reports Vilt. In the hill areas the rain is pouring down, but the ground is eroding, so many crops are still lost.

Covered cherry crops
"The rainfall in the heart of cherry growing in Belgium is enormous. The unroofed cherry crop is 100% ruined in Limburg," says Peter Durlet of Belgian organisation Depa-Fruit. "With this amount of rain, the cherries fill up with water and then they burst. Cherry cultivation is fragile and there are many things that can go wrong. So right now it's going finely wrong, everything is soggy. You can say whether it's climate change or not, but I've never seen such an amount of rain, there's nothing we can do about it."

The damage to hard fruits does not seem to be too bad at the moment. In addition to cherries, it is mainly open field vegetables and fruits that have been affected by the rain. "Entire plots have been flooded with a large amount of rainwater."

"In Belgium, it is not yet common to put canopies over fruit trees," says cherry grower Leon Vets from Emblem. "I started covered cultivation with roller systems a few years back and fortunately that helped. With the covered cultivation, the damage has been limited, but it really has to stop raining now, because the increased root pressure will still lead to the cherries cracking."

According to a statement from gemuese.ch, a shortage of Swiss vegetable supply is expected as the soils are soaked and can no longer absorb the rain. In the case of outdoor vegetables, some vegetables are experiencing partial to total damage. Crops are standing in water and rotting. This is particularly problematic for cabbage varieties such as cabbage, cauliflower and broccoli, and also for lettuces. Courgettes are also affected by the heavy rainfall.

New crops could not be planted or sown as well, according to the report. Greenhouse crops receive less sunlight, which is why tomatoes, eggplants and cucumbers develop very slowly and corresponding quantities have to be foregone. Outdoor crops are experiencing partial to total damage. The damage is expected to be noticeable until spring.